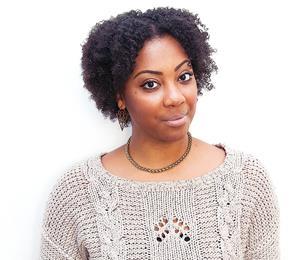 Photographer Jendella Benson is using her latest project to challenge the myths surrounding young motherhood. She talks to Catherine Francis

When the British media discusses young mothers, it’s usually in terms of negative stereotypes: they’re promiscuous and irresponsible; they get pregnant for free housing; they’re the cause of many of society’s ills. Frustrated by the scapegoating of young mums, photographer and filmmaker Jendella Benson felt inspired to challenge these negative images. The Young Motherhood project is the result.

“I have friends who had children at an age that society deems ‘too young’,” says Jendella, 25 (who is not yet a mother herself). “I’ve watched their tireless efforts to bring up their children well, coping with limited resources and while working or studying to provide a better life for them all. Their children have often excelled, thanks to their mothers’ sacrifices and hard work.

“However, in the mainstream consciousness, this picture of young mothers is absent, and they’re never given a voice. Instead, it’s about irresponsible girls who are promiscuous or opportunistic, getting pregnant for council flats and government handouts. The reality is that young women are often struggling in very difficult circumstances, such as caring for a new baby while living in a hostel alongside drug addicts. I’m inspired by the diligence of the young mums I’ve known, and their persistence in overcoming these challenges.

“The small percentage of young mothers who aren’t making good decisions for themselves and their children is used to shame and belittle a generation of women playing one of the most important roles in society. I believe it’s part of a bigger issue about how motherhood isn’t valued in our culture.”

Jendella’s response was to travel the country photographing young mothers, and filming them talking about the joys and challenges of having children in their teens and early twenties.

“My aim was to challenge people to rethink their prejudices and view young mums more empathetically,” explains Jendella. “Generally, reactions have been positive, but even when people mean well, there can be presupposed judgements.

"I’m sometimes asked how many participants in the project are with the fathers of their children, the implication being that they’re wilfully single. I explain they’ve often been abandoned by their partners, or may have escaped from abusive relationships. They’re painfully aware of the stigma of being a young single mother. I know one woman who is considering getting back together with a violent partner because she’s so worried about how negatively people view her. On the other hand, many of these young mothers are with partners.”

Jendella’s day job is as a commercial photographer and filmmaker, but her personal projects focus on more meaningful messages. These have included Our Skin (about identity, beauty and the use of skin-whiteners in non-white communities) and Where The Devil Won’t Go (about former gang members in South London who have become Christians and turned their lives around).

“I want to do work that matters – that means something in the long term,” she says. “My driving force comes from what the Bible says about valuing people, and the dignity of every individual. I want to challenge damaging misconceptions, and give a voice to people we rarely hear from.

“The Young Motherhood project is something God put on my heart some years ago. I kept putting the idea aside, but it wouldn’t go away. I had that persistent feeling that it was something God wanted me to do. Once I got started, it happened very naturally – like being pulled along in a slipstream. Funding it wasn’t easy, but I managed it with charity grants, crowd sourcing and private funding.”

The exhibition has now appeared at a number of events around the country. Jendella also hopes to produce a book, and plans to turn the filmed interviews into resources for organisations working with young mothers. However, she has even bigger ambitions for the project. At the time of writing, she was preparing to take the Young Motherhood exhibition into the Houses of Parliament. After contacting MP Teresa Pearce – who was herself a young mother – she was invited to present the project in the House of Commons in January.

“Sensationalist images in the press misinform policy makers and MPs, with young mothers being blamed for everything from the housing shortage to urban crime,” she explains. “I’ll be speaking, presenting the photographs and film, and some of the participants will be there, too. MPs rarely get to hear these voices. I hope it will challenge how they view young mothers.

“I’m nervous, as I’m entering a different world, out of my comfort zone. However, I think of biblical figures like Moses and Samson, who didn’t have the capacity for their roles, but God gave them what they needed. By the grace of God, this project has taken on a life of its own, beyond me.”