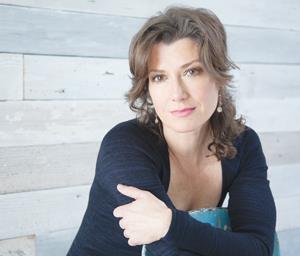 American superstar Amy Grant, 52, made history in the mid 1980s when her album Age to Age became the first Christian album to be certified platinum. The breakthrough release contained one of the singer’s most famous songs El Shaddai – which was later awarded one of the “songs of the century” by the Recording Industry Association of America.

The past 36 years have been full of achievement and success for the woman known as the Queen of Christian Pop. Now in 2013 she is back with her first new record in a decade: How Mercy Looks From Here.

Away from the glitz and glam of Grammy awards and gold discs, the singer has gone through tough times. But in the midst of pain and tragedy, Amy says she’s found mercy from God and from others. With the scene set for her new release, Amy comes across as thoughtful and contemplative during our interview.

“Life is complicated,” Amy comments. “We all have so much access to each other. The good, bad and ugly. Too much access I think. However screwed up any of us are, it’s not any reflection on God.

“I’m always most intrigued by people’s rough edges. I find them always fascinating and the rough edges are where we find, in some cases, camaraderie and also understanding.”

Fans around the world haven’t seen as much of Amy as they would have liked to in recent years. Why?

“I’ve not toured as extensively as I did in the late 90s,” she replies. “You learn some lessons the hard way and you cannot have a family survive if you’re not there.”

Two months after my initial phone interview with Amy, she’s sitting in front of a packed room of British journalists at The Big Church Day Out in Sussex. In a matter of hours, fans would flock to the main stage to hear the singer play her most loved songs. Operating on “zero hours sleep” she sounds a little weary. But as the questions flow, so does Amy’s wisdom. Despite her manager later attempting to hurry her away, the singer was in no rush. The allotted time for Q&A came and went, but Amy still invited “just one more question” before stopping to speak with a lady in a wheelchair on her way out of the room.

It may be a cliché that celebrities such as Amy are “just normal people”, but both interviews with the singer demonstrate that, in many ways, she’s just a normal 52-year-old (whatever ‘normal’ means). And when asked a no-nonsense question about life challenges unique to her as a woman, Amy smiles.

“People ask ‘what’s your greatest accomplishment?’ I’d say three successive albums and tours in a row. It was in the late 80s and 90s and I finished a tour four months pregnant. The reason it was an accomplishment was I always knew I wanted to have a family.

“It’s challenging when you’re doing something you love, but it also becomes successful. I understand when people have invested in you; they’re counting on you.

“But at some point you’ve got to think beyond the career and say ‘when I’m 60 I want to be celebrating the launch of the lives of my children’. Back in the arena days, I’ve done shows when I literally had my head in the toilet and they’re going ‘three minutes till show time!’ The guys don’t have to do that! You just wipe your mouth and be glad no one is close enough to smell your breath, and the adrenaline helps the nausea go away – sort of.”

Amy often shares the stories behind her songs while on stage. At most gigs she even takes requests from the audience. In person, she’s quiet, perhaps a little guarded and yet also very open to talking about all areas of her life. You could say she’s the perfect interviewee. Years of being in the media spotlight have taught her when to speak and when to remain silent.

Both on stage and in person, Amy seems relaxed and unhurried. Like many artists, she finds it easier to sing than speak. Each sentence is delivered softly and with great thought and carefulness. There’s a reluctance to give too much away, and the singer explains she is hesitant to use too much social media as she speaks more highly of mystery than she does access. Will listeners be able to hear the singer’s personal story on the new album?

“Hopefully what they hear is what I’ve been in the process of learning: Something is happening even if I don’t get it. I don’t say ‘Hey! my mum and dad both had dementia,’ but I don’t think that’s required to understand the record.

“I know the process of going through something I would have never chosen with my mum and dad ended up being (and continues to be with my dad) the most profound lesson I’ve ever learned at the hands of my parents. I hope the structure of seeing life that way, not the details of my life, comes through in the songs.

“When people tell you about the worst experiences they have gone through, you think, ‘Ah, I hope that never happens to me!’ and then they’ll go on to say: ‘I know this sounds crazy, but it was so amazing what happened in the midst of all that pain.’

“A very good friend of mine died in 2009. She was one of my dearest friends for 15 years. I could start with a friend today and never tell her all the things I told that friend. But we were taking a walk one day, about a year before she died and she told me: ‘I’m so grateful for the gift of cancer. If you didn’t have to go through the radiation and the chemo and I could just put in a capsule everything I’ve learned from this and make you swallow it, I would.’”

Whether I’m speaking to Amy, listening to her album or watching her perform, I sense the singer taking great joy in sharing her life lessons – which usually touch on themes of grace, forgiveness and mercy. Like most, she’s grown and matured as a person through the tough times as much as the pleasant ones. As for the fans that are desperate to know more about the singer’s life – they need only press play on the new album. How Mercy Looks From Here really is the perfect title.