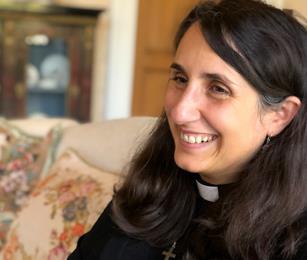 Lambeth Palace must be one of the most awe-inspiring places to work in the city of London. The cheery man who checks my ID at the gatehouse says he still gets a kick out of coming here every day after several years. He walks me across the courtyard in the sparkling autumn sunshine to the bottom of a set of stone steps, where I’m greeted and taken inside to meet the Archbishop’s Chaplain. The ceilings are high, the carpets plush, and the walls hung with vast religious oil paintings.

Despite the grandeur of her work setting and the weighty responsibilities on her shoulders, Isabelle is disarmingly vulnerable and wonderfully straightforward. She openly confesses to struggling with low self-confidence and seems at points a bit floored to find herself here. The truth is it is hard to imagine anyone better suited or more gifted for the multi-faceted and complex role she plays in the Palace and the Church more widely.

The journey to ordination

Isabelle’s journey to ordination in the Anglican Church has been long and winding, beginning back when she was a teenager. “I was 16 and living in France when I felt a call to live for Christ in a special way at a big Christian conference. My church didn’t have women in leadership, so I felt a bit confused and didn’t know what to do with it.

“When I came to England I got involved with the chaplaincy at the University of Nottingham. Through the chaplaincy lots of people began telling me I should consider going to Bible college and going into ministry. I went to a church that didn’t ordain its ministers, so they sent me to what was then London Bible College. I think they wanted me to go back to France after that, to evangelise France. I don’t think they would have been okay with a woman pastor, but they were okay with a woman missionary, as is often the case.”

By the time she had finished her studies at Bible college, Isabelle had got married. Her husband was an Anglican and it was because of him she first dipped her toe in the Church of England. She’s open about the fact that she’s an ‘accidental’ Anglican – life and God brought her to the Church of England, but she sees herself primarily as part of the Church of God as a whole.

Rather than returning to France, she got a job coordinating a local ecumenical partnership, trying to enable Christians to work together and learn from each other, while also teaching part-time at a university. The call to ministry remained strong, but she felt she needed to get some broader experience of the world first, so her next step was to train as a probation officer.

“I worked as a probation officer for five years and at the same time I was teaching theology one evening a week and some Saturdays. I left the probation service because I was doing a lot of safeguarding stuff and working with sex offenders and domestic abusers. My husband and I were trying to have a baby. We had lots of miscarriages and had to have fertility treatment, and I got to the stage when I found it too painful to do those two things together.

“We did eventually conceive and when I finished maternity leave I started looking at jobs. I was appointed as chaplain to international students at the University of Leicester. After a few months the lead chaplain had gone and the Bishop of Leicester asked me to step up as coordinating chaplain for the interim. Everyone was telling me ‘You must be ordained!’ I finally caved in to the pressure!”

“My resistance came from having seen lots of bad models of leadership in the Church – leaders who threw their weight around,” she says. “It put me off.”

In an interview with the Evangelical Alliance shortly after her licensing, Isabelle had said she felt anxious in her job, fearful she wasn’t good enough. I asked her where that sense of inadequacy came from and if there was a silver lining to it – did it make her more effective in any way?

Having been in the role a bit longer, she’s less worried about her ability to do it, but she says, “Confidence has always been an issue for me. It is deeply rooted in childhood and in having parents who were not affirming and who always expected perfection. Some of it is just my own history. There is a sense in which I feel like there is nothing in my background that could possibly have prepared me to be in this place doing this job. I was quite involved in last year’s royal wedding for instance. My parents were the first generation to go to university and my grandparents were farmers. I went to a very poor inner city comprehensive school in the middle of France. The discrepancy between what I’ve grown up with and where I am sometimes feeds that sense of ‘What am I doing here?’”

Does she think part of it might be the fact she’s a woman?

“I do think women struggle with confidence more than men,” she agrees. “I am very much a woman in a man’s world here, and I am trying to stay true to who I am in a way that has integrity, but also works in this world. Being reasonably young, female and not British – all of that can be quite difficult. But it can also be a positive. I bring another perspective and say things other people might not say.

“I often wonder if what I’m doing is good enough, but it helps to have an affirming team. I can just say if I don’t know anything, and there’s something quite important about not papering over things. I can get help and get it right. By and large this a safe place to do that. To a degree all of us feel inadequate.”

One of the other implications of being female in her world is the vulnerability to attack. “I am the only ordained woman on the senior team and I often act as a lightning conductor for those outside who struggle with the ordination of women. Some people are incredibly gracious about their disagreement, but others are not and it can be highly unpleasant.

“However, it comes with privileges too. When I was exploring ordination, I hadn’t seen many women in leadership. I didn’t have an example of what a woman vicar would be like – I couldn’t quite imagine it for myself. The number of times I’ve had women come up to me in tears just because they’ve seen a woman in a dog collar standing next to the Archbishop, is amazing. The level of affirmation that gives to women is enormous. The other day I was in St Pancras Station and a woman came up to me and asked which my church was. I said I worked with the Archbishop and she completely welled up, saying how important it was that I was there.”

A large part of Isabelle’s role is sustaining the prayer life of Lambeth and the Archbishop. When she’s not travelling, she oversees three services a day for the Lambeth community and any visitors to the Palace. I ask how she sustains her own prayer life, and she admits it can be hard. Her schedule is packed and she pours herself into holding up so many others, not least the Community of St Anselm, a group of 20 to 35-year-olds who spend a year at a time living in Lambeth. She says she uses the daily services for prayer, and that the walk to and from home is significant. She has a spiritual director with whom she’s in contact once a month, and she goes on regular retreats.

During our conversation, I became more and more aware of the courage it must take every single day for Isabelle to show up and carry out her calling. Since we met I have tried to remember to pray for her, for energy, for the ability to shrug off criticism and live in the warmth of God’s approval, for her brilliant mind to stay sharp and clear as she puts it to work in the service of the Kingdom. Will you take a moment now to pray for her too?