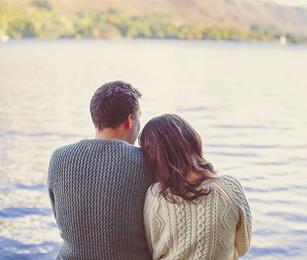 Thom and Ginny Gangway had been married for nine months when they attended a Time for Marriage course. Ginny describes their experience and what’s involved ...

I had only been part of King’s Church in Darlington for three weeks when I was introduced to Thom. It was March 2014 and I was staying with my aunt at the time. One Sunday morning, as we were getting ready for church, she came into my bedroom and boldly said: “You’re going to meet your husband today.”

Later that morning, we were introduced and we went on our first date the following Sunday. For us it really was love at first sight! We got engaged in the Lake District three months after meeting and married in December later that same year. Thom had been praying for a wife for a number of years and was all set on going out to Canada to work when along I came!

Before the wedding we did a marriage preparation course which we both really enjoyed. This was an opportunity to learn more about each other and ensure we were ready to be husband and wife. The couple who led the course are also members of King’s Church and Thom plays in the worship band with one of them, so we knew them, but we really got to know and trust each other through the marriage prep.

They were guests at our wedding and it was them who invited us to consider a Time for Marriage weekend, as they are one of the teaching couples. We jumped at the invite, seeing it as an opportunity to learn more about each other and to spend time with God.

We had booked the weekend quite a few months in advance and, to be honest, had put it to the back of our minds, as it seemed so far away. But suddenly the weekend was upon us and we spent a long, seven hours in the car travelling to the venue in Chepstow, Wales.

The Cwm is an absolutely beautiful place. It is very remote, peaceful and surrounded by natural beauty. From the moment we walked into the house, we immediately felt welcomed and at ease. The hosts truly spoil you with their homely touches, warm welcome and unbelievable food. We were shown to our bedroom by one of the teaching couples – it was called the Narnia room because you quite literally walked through the wardrobe and into a bathroom!

The teaching couples did an incredible job. I could see how enthusiastic they were by the amount of effort they put into preparing for sessions and their openness and confidence instantly put us at ease. It was really great to hear their stories and examples from their own marriages.

The programme was certainly jam-packed, but there was nothing in there that we didn’t find relevant or helpful. The sessions were around an hour each and included teaching and activities.

We really enjoyed the video clip by US marriage and family expert Mark Gungor from his Laugh Your Way To A Better Marriage series about the differences between male and female brains. Although this video was really funny, it enabled us to understand each other better.

I particularly enjoyed the couples’ activities that we did together. Two of the sessions involved us writing letters to each other – the first a love letter and the second writing about how we feel about living with each other, and our hopes and dreams for the future. The wives were encouraged to go off to our bedrooms to write, whilst the husbands could go off and find their own space to write. The husbands would then collect tea, coffee and cake and meet their wives in the rooms to read each other’s letters.

We had no idea how easy it would be to write out our feelings and to explain things to each other, but also we didn’t realise how emotional we would get and how we instantly felt more connected at a much deeper level.

On the Sunday morning we met in two separate groups – husbands in one and wives in the other. Before the session we were encouraged to write down a question we wanted to discuss on a piece of paper and put them in a basket. These were mixed with questions raised at previous weekends and some made-up questions, which meant that issues and topics were brought up anonymously. This was great as it gave us a chance to discuss with others and learn from each other in a safe environment.

On Saturday evening there was a romantic meal where we got dressed up and were seated at individual candle-lit tables. We were served a three-course meal with wine. This was a great fun, relaxed and romantic evening that reminded us of the importance of just spending time focusing on each other.

For me the most powerful session was the final one where we had prayer time. The group split into two and in our smaller groups each couple was asked what they would like prayer for and, collectively, we prayed for each couple one at a time. We were given a prophetic word for us as a couple, which we are continuing to lean on and pray through.

We were surprised to learn that ahead of the weekend the host had been praying for us and had written individual postcards for each of us with a prophetic word, diagram or Scripture. We were also greatly blessed by a prayer partner – this is a couple who are praying for us as a couple both before, during and after the weekend.

We both thoroughly enjoyed our marriage weekend. It completely exceeded our expectations. Everything, including the venue, the food and the teaching was brilliant. Going on the weekend at such an early stage of our marriage was so beneficial because it allowed us to discuss the challenges we have already faced and build on our foundations. We both came away feeling closer to each other and closer to God. We could not recommend this weekend enough to any married couple!

Time for Marriage is passionate about couples discovering God’s plan for marriage and organise marriage enrichment weekends in carefully chosen venues across the UK.

The weekends create a welcoming and relaxing environment with everything in place for married couples to spend some special time together investing in their marriage.

Trained TfM couples share both biblically-based teaching on marriage and their own experiences (both good and bad), and give each couple space to look at how to live that out in their own relationship.