The decisions that changed my life 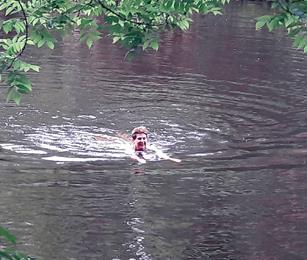 In January 2016, facing my 50th birthday, I walked onto a plane for the first time ever on my own and took off for Australia via three days in Singapore, for two months’ solo travelling. My son had just left home for university and, with the death of my daughter, Gabi, from a rare seizure two years before, I became an empty nester years before I was expecting to be.

So I put my PR business in the hands of trusted associates, sold our family home and moved into rented accommodation to fund the trip of a lifetime – a trip I had promised Gabi we would make together to visit her dear friend Martha, who had emigrated to Sydney nine years before. 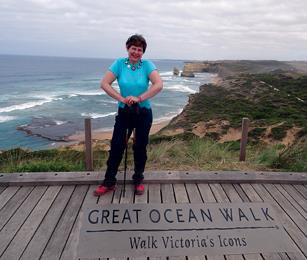 From the Southernmost tip of Tasmania with nothing between my boat and the Antarctic, to the tropical coral atolls of the Great Barrier Reef, I had the best eight weeks of my life. And discovered a passion for outdoor swimming.

Overheated, highly chlorinated public pools have never been my idea of a good time, but my daughter loved swimming, so I’d grit my teeth and occasionally bear it! In Australia, I was swept into another swimming world altogether.

Drifting downriver with the current into the sea at surfer-chic paradise Noosa was exciting; plunging into the estuary at the end of the iconic Great Ocean Road Twelve Apostles Walk (watch out for eels, the guide said) was ecstasy after a roasting hot day of hiking. Splashing in the breakers of Wineglass Bay in Tasmania, a World Heritage Site named one of the world’s top ten beaches, after a tough 45-minute hike from the kangaroo-covered car park, was simply stunning.

Floating among short-eared terrapins and getting my feet pedicured by tiny nibbling fish in one of the world’s handful of perched lakes on Fraser Island, the largest known sand island, was magical. Cooling off in the stunning carved rock pools of the Sydney coast reached by the iconic Manly Ferry was exhilarating. Snorkelling, trailing green turtles, manta rays, sharks and tropical fish in kaleidoscopic colours on the Great Barrier Reef was the highlight of my trip and every bit the bucket list moment I had dreamed of since I was nine, and was entranced by Life on Earth.

I had never been travelling. Never had a Gap Year. Never had an adventure. Now, whether I was camping in remote eco-resorts, reflecting in an abbey on a silent retreat, or Airbnb-ing my way around Tasmania, my eight weeks’ travelling became a time for taking stock, re-orientating, re-envisioning my life and a chance to grieve again for my daughter, away from the usual cycles of work and life busy-ness.

But on Maundy Thursday 2016, I was back in chilly Britain. What to do until my next adventure and how to bring back that amazing feeling of well-being each day? Well, I had been well and truly bitten by the swimming bug, so I decided I would go to one of the named best outdoor lidos in the UK, the open-air pool on my doorstep, just 20 minutes away in Hathersage.

Every Monday, my swim started my week like that Australian holiday. I have a stunning drive into the Peaks over Stanage Edge (beautiful in sun, rain or the occasional supernatural-looking cloud inversion), an hour’s exercise, then a healthy breakfast enlivened by the friendly banter of the café team. I take my diary to plan my week, my Bible for guidance and head space, then start my working week refreshed, energised and raring to go.

Most of the year, it might be colder than Oz out, but the pool temperature is a balmy 29 degrees once you’re in and the feeling of freedom under a big sky comes washing back. I never count lengths because the rhythmic strokes as I plough up and down, looking out at the hills, is a wonderful form of meditation and reflection.

I never missed a single week that first year back from Oz, and to celebrate my commitment, I made a New Year’s resolution – or goal I would prefer to call it – to become a season ticket holder and go twice each week. The pool staff are friendly and welcoming, and there is great camaraderie among ‘the regulars’. I’ve met loads of interesting people and smile at the ones who walk from their local homes in fluffy white bathrobes and flipflops, to jump in for a daily dip.

The pool can be busy in the warmer months, so I’ve had to seriously up my game to be admitted to the medium lane. It gets less busy off peak in September when the temperature is gently reduced to an invigorating and still ‘do-able without a wetsuit’ 20 degrees by October.

The last week the pool opened to the public at the end of November, before they switched the heating off for the brave ‘ice milers’ to train, was challenging I admit. It was minus 4 out that day. There was ice on the changing room floor and the handrail into the pool, and only me and a male triathlete in the water!

The pool reopened at Easter last year and I was straight back that first week. It felt so fantastic, I committed to going twice a week and did so every single week through the season, apart from when I was in Portugal on holiday – and I swam in the resort’s pool instead!

The pool has become so successful they ‘crowd-funded’ to keep the water warm throughout the winter for the first time in the pool’s history since opening in 1936. So this year, I am very much looking forward to swimming all year round. The colder it is out, the more I like it, as it’s so much less crowded!

My friend and associate, digital marketing specialist Jessica Zeun, runs Yorkshire Outdoor Swimmers in her free time and urged me to join her super-successful swimming club at Harthill Reservoir. I now go wild swimming in decidedly parky Derbyshire waters and love it. I also tried lake swimming in Derwent Water while holidaying in the Lake District last year, which was warmer than my local rivers and a brilliant experience.

My Australian adventure has led to many more closer to home and I now enjoy that holiday feeling every week of the year!

• Resolutions are easy to break – usually by the second week in January! Call it a GOAL instead and break your goal down into manageable steps. For example, in year one I swam once a week, in year two I became a pool member and swam twice a week.
• Find something you really enjoy, then you won’t make excuses not to do it! I have to shower anyway, so swimming first actually takes only 45 minutes more from my day!
• Find a time of day that suits you. Exercising 8–9 am each day works for my life. I start and finish work a little later, but go through the day on the rush of endorphins from the activity and being outside (also great for boosting Vitamin D, in which many of us are deficient), and connecting with nature. All three proven to increase well-being and productivity.
• Mix it up. I found I loved open-air swimming, walking and strength training. I swim twice, walk four times and train once a week.
• Go with a friend – company increases commitment! I had never been to a personal trainer in my life, but by sharing the cost of just one hour a week with a friend and pre-paying by the quarter, I never miss a session. We have enormous fun and our new-found strength will help guard against osteoporosis and has given me a better body shape than I had in my twenties!