The "Bake Off" queen 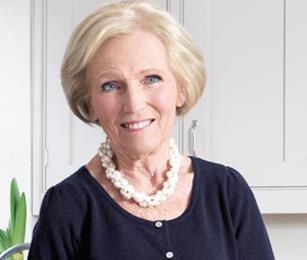 The Great British Bake Off star Mary Berry talks to Liz Parry about her lifelong love of cooking, the importance of family life and how she stays fit and healthy – despite all those cakes!

Home cooking and baking have enjoyed a national resurgence in recent years and that is thanks in part to The Great British Bake Off star Mary Berry. The 79-year-old cookery writer and TV presenter has played a major role in encouraging people to rediscover the delights of good old-fashioned home cooking.

With a career spanning six decades and over 70 cookbooks to her name, Mary has enjoyed huge career success and become something of a role model for many older women. When asked about the secret of her success, Mary attributes this to the care of her husband Paul, to whom she has been married for 48 years.

“I have a wonderful husband who has supported me in everything that I have done,” she says. “Paul actually quite likes it when I am out and about and working hard. He encouraged me to take the job as a judge on The Great British Bake Off. He is happy that I am busy, as long as I remember to come back home every once in a while! But even though I’m busy we make it work; we make time to see each other. I think that we respect each other and we enjoy doing things together. It’s a life of sharing. I couldn’t bear to be without my husband.”

Family life has always been important to Mary – her three children, Thomas, Annable and William, who sadly died at 19 in a car accident, and also her five grandchildren. “I love coming home and relaxing with my family; that is precious time for me,” says Mary. “I would hate to come home to an empty house.”

As a career woman, Mary has always had to juggle working life and family life, and the secret, she says, is to plan ahead. “I always found that if you got up really early that does help with the organisation – and lots of lists,” she says. “I had lots of good friends to help me with the children, but it was a difficult time. You do feel guilty.”

Although Mary is a Christian, she is private about her beliefs, describing her faith as “just part of my life”. She also chooses to keep her Christian beliefs separate from her career in the public eye. “I don’t think [my faith] has helped me to get where I am now. As a family we have a faith, but it isn’t really to be discussed with other people.”

Mary will be celebrating her 80th birthday next year, but shows no signs of slowing down. “You’ve certainly got to keep active,” she says, “and the best form of keeping active is walking, if you possibly can. Get out there in the fresh air, go and help people, be part of your village or your area and look after your neighbours. Don’t just watch television.”

Despite all those cakes and bakes, Mary manages to keep in shape through an active lifestyle and a healthy diet. “I eat well,” she says. “I have a balanced diet but eating well means that my body is full of the things I need. I don’t add sugar into any food. I know that I am lucky to be so fit and healthy at my age; many of my friends and peers are not so fortunate. Good genes are a big part of that, I think.”

For someone who has enjoyed such a long and successful career, it might come as a surprise that Mary did not do so well at school. “I was never very good academically,” she says. “So cooking is the only thing that I can remember ever wanting to do. At school, if you were clever, you did Latin and maths and if you weren’t, like me, you did domestic science. But I loved that, because I soon got the bug for cooking. It was all I liked doing at school so it quickly became the thing I excelled at and the thing that I wanted to do when I left.”

Mary cites one former teacher as her early inspiration. “My teacher, Miss Date, was the one who encouraged me when she saw I had a passion and a flair for cooking,” she says. “I’d found something I could do and she praised me and encouraged me all the way. If it wasn’t for her, I may not have even got into cooking. So any success I’ve had I always feel is down to her inspiring me from the beginning.”

Now that she herself is a role model for other cooks, Mary’s main advice is to be frugal and to make the most of leftovers. “I am loath to throw anything away,” she says. “I would encourage people to think about what they have left over and how it can be used again, in soups or broths. I even freeze wine so I can use it again in gravy! Someone who is a good cook will go into the fridge and go: ‘Ah, there are a few potatoes, some carrots, I’ve got a pint of milk and some sausages,’ and they’ll make a lovely vegetable bake and serve it with sausages. It’s using what you’ve got and spreading things out. I think a good cook is able to gather the ingredients that are around her and use them wisely.”

Mary also recommends being mindful of the amount you are cooking. “Try not to cook too much,” she says. The key thing to remember is to always weigh your food out as accurately as possible. If you do that and you are following a good recipe to the letter, you can’t go too wrong.”

With Christmas nearly here, one might wonder what the festive period is like in the Berry household. Does Mary like to cook or does she let husband Paul take over the reins at Christmas time? “I always insist on cooking,” she laughs. “I won’t let anybody else do it! I love it all – the dinner, the trimmings, the cold turkey sandwiches. I am normally cooking for about 12, which is enjoyable. I try to make it as stress-free as possible. I always make a big list of what I need to cook, get as much of it done before Christmas Day and then I can relax and enjoy myself. And I always make a trifle. It’s not Christmas without one!”

Following the huge success of The Great British Bake Off, Mary found herself in the glare of the celebrity spotlight, but she says her experience of fame has generally been a positive one. “I am hugely grateful for everything that I have and what The Great British Bake Off has done for me,” she says. “Everyone I meet is lovely to me. Just the other day, a couple of young lads came up to me and asked for a photograph – they were probably not even 20. But they did it because they were big fans of the show, and they were so nice and respectful. I enjoy that.”

So what has been the highlight of her long and illustrious career? “I am enjoying where I am right now,” says Mary. “I think this has to be the highlight of my career. The Great British Bake Off has been so amazing for me personally; it has given me a whole new lease of life. Getting my autobiography written was also a huge achievement for me. I am loving my life and to have this opportunity at this stage of my career is wonderful. I am so lucky.”