Sharing words of life and hope 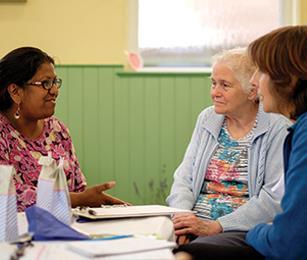 I am in a flat on the 7th floor of a tower block in an English airport town. There is one bedroom, and a living room with a galley kitchen at one end and a balcony at the other. This is Katie’s* flat – she is sitting on the sofa in her dressing gown.

I’m here with Ruth Robb and Vicki Miller from Azalea, a project that supports women caught in sexual exploitation. They have known Katie for several years, meeting her when she was working in prostitution, and supporting her through prison, hospital, rehab, church, through tragedy and triumph, to the place where she is today – in her own home, on good terms with her family, free of drugs and moving on. Today we are here to talk about the Bible.

Azalea know the power of God’s Word to change lives, and use SGM Lifewords resources regularly, sometimes giving booklets away, or reading through them one-to-one at their drop-in centre. The Azalea team use pastoral and seasonal booklets to help the women understand that they are loved by God and have worth beyond their current circumstances.

Not that Katie has much time for Bible booklets.
“Not to be rude about your stuff,” she says, “but I used to just throw them in a corner. The girls – their life is hectic. It’s alcohol, it’s drugs. So you have to introduce it slowly, go through it. You have to be persistent. Ruth used to chase me, didn’t you Ruth?”

Ruth nods. She first met Katie through the outreach car, which drives around the streets where the women wait for clients. The car takes the Azalea team to meet people and offer friendship, cakes, and somewhere warm to come back to at the drop-in. Katie didn’t have much time for that either.

“I used to see the car coming and run – them lot again! If you try and throw Jesus at someone out trying to make money, they’ll run like I did. If you say ‘come and have a hot meal’, it’s different. You have to be patient, encourage people to come back. You win them over slowly.”

Dozens of women come and go from the Azalea drop-in, stopping by for food, to use the washing machine, to talk or to pray. Each of the women is matched up with a volunteer key-worker who will meet and support them. On any given day, that may involve driving someone to the dentist, dropping off a donated sofa to a woman who’s just been re-housed, or visiting them in prison. Many of the women have been in and out of prison all their lives.

Ruth has decades of experience working with women caught in sexual exploitation, in London, Glasgow, Afghanistan, and now here. Alongside leading Azalea, she advises other organisations around the world on ministry in this challenging context, with all its complications around safeguarding, mental health, addiction, and politics. It requires enormous grace, prayer and patience.

Azalea have seen many women move on, but others go through rehab and then relapse. Some are pushed back into old lifestyles by controlling men and unhealthy relationships. Many have been victims of violence. Progress is always slow – two steps forward and one step back – and Azalea has known more than its share of tragedy. At the same time, the Spirit is alive and at work in the lives of the women, and an important moment or a key conversation can happen at any time.

For these women, Bible-reading notes or discipleship resources are often difficult for them to relate to. Nothing quite meets their particular needs, so we realised that the best way to explain the Bible’s message of love was to do it in their voice. Nobody knows their situation better than the women themselves, so we decided to ask them to write the Bible booklet. We collaborated with the women using writing workshops and one-to-one conversations about the Bible. What themes resonate? What do the verses make them think about?

Katie picks out Isaiah 43:4 as a favourite. It’s one of the most direct expressions of God’s love for his people: “’You are precious in my eyes, and honoured, and I love you’. It’s amazing how God can make you feel special,” she says. “He shows you a love you don’t experience. I never felt a father’s love in my life and I didn’t think I ever could until I accepted God. He makes me feel like my new childhood overtakes my real one. Being special is the hardest thing to come to terms with, because everybody looks down on working girls.”

A couple of weeks later, I am at the Azalea drop-in on a Monday morning, working through the first draft of the manuscript with some of the women. We are sitting at the craft table, where the women take part in art therapy sessions. There are tubs full of pens and pencils and stacks of coloured paper. Every hue of pink is catered for. The rug and the cushions are pink too. “The drop-in is an escape from the streets,” says Ruth of the décor. “It has to be welcoming, bright, safe. It has to feel like home.”

One of the women had a birthday that week, so they had a celebration and made her a cake. “That kind of thing changes people,” says Ruth. “She’s been back and forth here for years. She came as a woman in prostitution, someone who needed our services, and that defined her. You come because you’re a mess. But then she had her birthday, and she became an individual. We got to show her that she matters, that she has value and she is loved. That can be a breakthrough moment.”

We are interrupted by a knock at the door. A young woman in a grey jumper is on the doorstep, the hood pulled up around her head. “I know you’re not open,” she says, “but I saw the lights on.” Ruth welcomes her in without hesitation and makes her a coffee in the open-plan kitchen. The woman takes it, cradles it in both hands and curls up into a ball on the sofa – one more kindness in a long line, a breadcrumb trail of grace.

The final result of our collaboration with Azalea is an unorthodox book of Bible readings. It has a verse for each day of the month, with commentary from the women. Some of them have found faith and moved on, but this was not a prerequisite for participation. The booklet is full of hope, acceptance and forgiveness, the testimony of changed lives. But it also has questions, lament, brutal honesty. It is a true reflection of God at work in difficult circumstances, in stories that are unresolved, and that don’t necessarily have happy endings in this life.

We know that God can bring beauty and new life from the messiest of situations. And if we are honest with ourselves, we know that our own hearts are a mess too, that all of us are tangled and conflicted. It’s why we’re calling the booklet Wildflowers: Flourishing in the Chaos. This is where God operates. It’s the best place to discover the amazing truth of a God who gave everything to call us his children, and who sees us as his treasured possession. As one of the women prayed at the drop-in recently, “Help me believe the truth about myself, no matter how beautiful it is.”

+ This article was originally published by SGM Lifewords in Interact Magazine, issue 3 2016.
*Names have been changed