Sharing my struggles has enabled me to help others 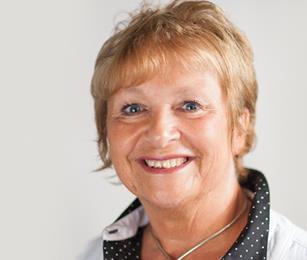 There’s nothing Dianne Parsons likes more than welcoming someone into her home, pouring a coffee and sitting down for a chat. It’s a time to laugh and cry together, she says, to share hopes and fears, joys and sorrows, and to delight in each other’s company.

For the past 30 years she’s reached out to hundreds of women in this way, though instead of sitting at her kitchen table in Cardiff, Dianne has been standing on stage at the Royal Albert Hall or Birmingham Symphony Hall as a spokesperson for Care for the Family.

She’s spoken about motherhood and led debates on Issues Women Face. She’s urged people to make a Change for the Future, and she’s participated in bereavement support initiatives. And she’s been alongside her husband and founder of the organisation, Rob Parsons, when they’ve led marriage seminars. She’s done so always with the same down-to-earth warmth and openness.

“I’ve spoken with sheer vulnerability and honesty,” she says. “There are such pressures on people today and I’ve been able to share my struggles as a wife and mother, and as a woman.”

Now she’s put together some of her life lessons in a book, and the title could only have been one thing. You, Me and Coffee is a beautiful collection of stories and memories, inspirational messages and quotations.

“I wrote the stories some time ago and filed them away,” she says. “And then I felt there was something there that could make a book.

“It’s as shallow or as deep as you want it to be,” she continues. “You can read it through and enjoy it, or you can dig deep and think ‘how does that affect me?’”

The book reads just as if we were having our own conversation with Dianne. There are pages left blank for us to write down our own responses to the questions she raises, and the struggles she’s shared.

“I’m so glad we took this rather unusual approach,” she says of the publication. “These scrapbook pages are for people to graft something for themselves. They can respond to what they’re reading and write down how they can change the future for themselves.

“We all have dreams no matter how young or old we are,” she continues. “Sometimes we are so bound up by the pressures of every day that we don’t have time to try. It may be something simple like drawing or making a quilt, something we are desperate to do but just don’t seem to have the time to do it. Somehow we miss it.”

For Dianne, writing this book is one dream she has seen fulfilled after long considering herself inadequate. Now, as a doting grandmother, taking more of a back seat from the day-to-day operations of Care for the Family, she is able to see the contribution she has made over the years, despite the odds, and hopes to encourage others.

“Within me there was another person trying to get out,” she says. “I think a lot of people have that feeling about themselves. For most of my life, certainly until my 40s, I had very low self-esteem.”

While she liked sport, and thought herself a good gymnast, as a child she didn’t achieve academically.

“I loved chatting to friends, but I was shy and afraid.” Working in a hairdresser’s salon, she enjoyed talking to the clients, but was worried about getting things wrong. “What if I cut their hair badly? What if the colour went wrong?” I was a ‘what if’ person in those days and didn’t have any ambitions.”

She took a job in an insurance office before marrying at 22. Then having children also terrified her.

“I’d come out in a sweat every time I went past the maternity unit at the local hospital! I’d think ‘how am I going to cope with this’, a little bundle that depends on you totally. I wondered if I was going to be able to do the job.”

When her second child was born, Dianne found life became very tough. She was diagnosed with chronic fatigue syndrome ME, and battled it for seven years. “I had to have somebody to look after the kids for a while, and I think because of those years, I felt that I had no value.”

Looking back, though, she can see how God has used her powerfully, and hopes that her story will encourage others.

Dianne recalls first responding to the Christian message when she was about 13. “It was fire and brimstone in those days,” she says. “But I remember somebody speaking in my little local church about Christ coming back and that if you loved Jesus you would go to heaven. I thought ‘I really need to think about this’.”

While Dianne’s father didn’t attend church, her mother did and members of the youth group were invited back to the house for coffee. “There were about eight of us who would sit and chat. We still keep in touch.” She met Rob there when she was just 15.

“I was very young, and I’ve struggled many times,” she says of coming to faith, and thinking particularly of her illness. “Why wasn’t God healing me? There were probably days, weeks, months when I couldn’t pray. I never gave up on God, but there were days when I couldn’t even think about the presence of God.

“I had the faith to believe he was there, but I never really felt it. God was with me through it all, he must have been. That was the reason I didn’t throw the towel in because I must have known that he was holding me. We can’t rely on our feelings all the time. Sometimes we just have to have the faith to carry on.”

Dianne still has times when the illness is an issue for her, and when she doesn’t feel equipped to speak. “It can be really daunting and there are days when I don’t feel like doing it. But there are other times when I feel I can fly.”

She knows that she has a message that should be heard, just like the first time she took a step out of the boat, as she says, to speak at a medical conference.

“I was just lifting my head above the parapet of being unwell and ME wasn’t being recognised at that time. Rob was speaking to some doctors and social workers, and I felt that I wanted them to know how I felt.

“I told Rob I wanted to say something, but I think he nearly fell off his chair. ‘You’ve never spoken in public,’ he said. But I felt I’d got something I needed to say. It took all my courage and energy, and Rob was brave too because he had no idea what I was going to say!”

She has gone on to lead seminars and presentations ever since and the organisation has grown considerably since it was founded in 1988.

Rob had left his post in a legal practice in order to head this new charity promoting family life. Used to plush facilities and a team of support staff, he found it tough working alone in an office above a hairdresser’s salon, typing his own letters and struggling to get people to return his calls. But Care for the Family has gone from strength to strength and today has 80 staff, 400 volunteers and 40 different projects. “A lot of people have worked really hard,” says Dianne. “And God has been amazing.”

Naturally in this work, Dianne has seen many people go through difficult times and values the prayer of others to sustain her.

“Sometime there are no happy endings,” she says. “It’s good to have somebody with you where you can see light at the end of the tunnel.

“The best bit for me was mixing with people who wanted to hear the realities of being a mum – that they weren’t on their own,” she says and remembers when she picked up her son from school and heard the teacher commending another mum because her daughter had read the front page of The Times that day. “I had the Beano under my arm ready for Lloyd when he finished school!

“I think a lot of the time you are looking over your shoulder, worrying about what people are making of your job as mothering. We need to be released from that. Each child is different, each person is different. We have different qualities, but we are all needed. So let’s not judge each other – let’s get alongside and help each other.”

She goes on to recall a poem quoted in the book. “There is freedom waiting for you, on the breezes of the sky, and you ask, ‘What if I fall?’ Oh but my darling, what if you fly?”

“I think that’s so perfect,” she says. “I love the thought of people trying.”

For Dianne, that means there may be another book, perhaps something written for children, and she’d like to sing in a choir.

“It’s not about proving ourselves to anybody. I didn’t write this book to prove anything, not even to myself. I wanted to write it so other people could catch something for themselves.” She’s an inspiration and an encouragement to us all.

Catherine Larner is a freelance writer based in Suffolk