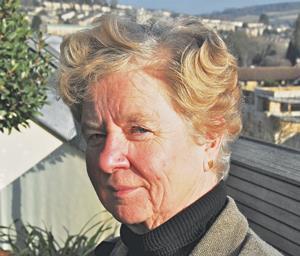 A former Roman Catholic nun (she left her religious order in 2000 after 34 years, over the issue of women priests), Lavinia is the author of several books and a contributor to Radio 4’s Thought for the Day. She currently lectures and leads travel groups for Jon Baines Tours.  She spoke with Ali Herbert

Was your upbringing within the Roman Catholic Church?

My Irish grandfather was doctor to the Catholic Bishop and to the Fathers at the Oratory in Birmingham. That was a very famous church because it is the religious order that Cardinal Newman founded. My grandparents were married by a priest who was the final novice that Cardinal Newman admitted to the community and that priest married my parents as well and baptised all of us four children. So I have very close links with that church. We went every Sunday throughout my childhood.

Did you enjoy going to church as a child?

I loved it! It was full of smells and bells. My father bought me a special prayer book and he underlined in biro all the bits that the priests would say and then in a different colour all the bits that I should say.

And you went to a convent school?

Yes, I went to a convent school in Edgbaston where we lived and subsequently throughout my education I was educated in very good convent schools. I was 17 when I joined the community as a nun.

Was that a clear calling for you?

Not a one-off big bang in the night, but much more of a gradual sense that this was what God wanted me to do and that I would be very happy if I did do it. I’ve never had a conversion moment – faith has always been a total part of my belief system and my value system ever since I can remember.

And you were a nun for quite a long time?

For 34 years. The religious life changed considerably all the time I was in the community because we had the Second Vatican Council, which meant dramatic changes in our lifestyle. For instance, when I entered I wore a habit, but by the time I left I hadn’t worn a habit for about 15 years. It was jolly nice to start wearing ordinary clothes and a great liberation because by the mid-70s and early 80s wearing a habit was beginning to look increasingly strange.

And you were involved in teaching during these years?

I went to university, where I studied French and Spanish, then on to Cambridge where I learnt to be a teacher. And I taught for about 15 years in very good schools run by the order: St Mary’s Ascot, St Mary’s Shaftesbury, St Mary’s Cambridge and the Bar Convent in York, which is the oldest catholic convent in the country.

Were there core things that you felt you learnt in those years?

Yes, there is a novelist who wrote a wonderful book in which there is a nun who is a bit of a heroine and she says that the convent has taught her conviction and kindness. I think that just about sums it up. You’re taught to practise your faith in a very real way and to make sure that you have integrity because that’s how you’ve chosen to live and you’re committed to live that way – caring more about other people than yourself.

What did you find hardest about it?

Well it wasn’t that hard, actually. Honestly we weren’t enclosed, we were an educational order, we had huge amounts of personal freedom and received very good education ourselves.

You wrote the book Woman at the Altar in 1992 and that eventually led to you leaving the Catholic order. How did that come about?

I’d written eight books by then and my publisher said, “Why don’t you write one about the ordination of women?” So it wasn’t my idea! I was working at the Council of Churches at the time and my job was to look after the concerns of women in all the churches. I went to the debate in the Houses of Commons and Lords, and in the General Synod, and saw all these tired old arguments being talked about and debated. It seemed to me that it was such a natural thing to ordain women and therefore I wrote a book at a time when the Catholic Church permitted debate. Cardinal Hume – the English cardinal to the Catholic Church at the time – came out in my favour and said that Rome should never have intervened retrospectively and that it was quite unfair.

Have you changed your views on women priests since then?

No, I’m still convinced that not to ordain women is becoming more and more outrageous because it is based on metaphors that no longer work. For example, the Church is the “bride of Christ” – so she therefore requires male, celibate husbands ie male priests – but it’s only a metaphor!

In your book you say that if this was taken to the extreme, then only 33-year-old Jewish men could adequately represent Christ?

It’s so literal. It is a theology developed by a male, celibate cadre – people who have an interest in perpetuating their own species.

So have women’s roles changed over the last 20 years?

Well, certainly, there’s a huge decline in vocation to the religious life in the Catholic Church and that is because young women realise that you no longer have to be a nun to serve the Church. There are lots of organisations that do the work the sisters used to do – and do it very well.

Has your experience changed how you feel about the Church?

Well, I still go because it would be so completely against the grain for me not to go. But I am anxious. Every Sunday we have a very elderly, sick priest who is wheeled out and the altar boys have to help him up and down into the sanctuary. I sit there fretting, thinking there are so many other people who I’m sure God is calling into the priesthood – be they married men, be they women. But I was conceived a Catholic, my parents wanted to have a Catholic child and, lo and behold, they got one!

You have suffered with something called ‘familial tremor’ for many years. When did that begin?

Alongside the good things I inherited from my mother and grandmother, I also inherited very shaky hands which began when I was 14. It gradually increased; every 10 years I noticed it getting worse. It used to be called ‘benign tremor’, though no tremor is benign when you cannot write or hold a cup of tea without pouring half of it down yourself. The school nurse used to tell me to put my hands in cold water. That was in 1961.

And you have had a successful operation to control this?

By 2001, a radical new treatment had been devised both for familial tremor and for the shakes associated with Parkinson’s disease. The surgeon places two probes deep inside the brain and then runs a tube round behind your ear to connect them to a gadget that is inserted inside your chest. Then you are given an external remote control, which allows you to choose how high or low you want the signal to your brain to be. And miraculously it works. Or it does now I have learnt how to control it. At first I had it on too high. I was waving my upper arms around like a chicken and had very slurred speech, which alarmed my friends. These are side effects that the doctors anticipate, so nothing to worry about.

Has it been effective for you?

It was a total breakthrough for me to be able to function without dropping things and spilling things, and generally being an embarrassment, particularly when eating in front of other people.

And now you are busy leading cultural tours for Jon Baines Tours each year?

I enjoy that hugely – it brings so many threads of my life together. First of all, looking after people in a quite basic way, for instance by making sure they’re on the bus safely, that their luggage is there, they’re comfortable and they’re sucking sweets when we go up high mountains. And then the way of being able to make very intelligent people think, because I also give lectures that are very forensic. I’m not trying to convert people to anything, I’m merely spelling out the facts, but in a way that I hope chimes with their own experience and understanding. Because nowadays we all have a duty to try to understand, for example, Islam, or why religion is so important in the Middle East. So it’s thrilling to be part of that.

Where are you travelling to this year?

I was in the Lebanon in June and will be in Uzbekistan and Anatolia in the autumn and ending up in Vietnam and Cambodia.

And your most recent book was called Original Prayer?

I wrote that about three years ago – about the origin of groups of prayer. It examines some of the origins for instance in Benedictine spirituality and Ignatian spirituality, and then I go further afield and look at the hymns of Charles Wesley, prayer when you’re ill and then the final chapter is prayer in cyberspace – it comes right up to date!

Do we need to engage with prayer more in our secular society?

I think we have to grab new opportunities and certainly teach children about silence, about listening to their own hearts. We’re such a noisy world and they’re almost taught to be afraid of silence.

Do you feel that your faith has changed over the years?

The book I wrote when I left the community is called The Journey is my Home and I think that sums it up for me. If you are a person of faith, you have a duty to grow, to change, because to change often is to live more fully. But I haven’t lost my Catholic roots and that’s what the Church should be: a place where people are able to grow and answer all the calls God sends them.

Don’t be afraid. Because the journey of faith is such an exciting one and you’ll end up somewhere you could never imagine.