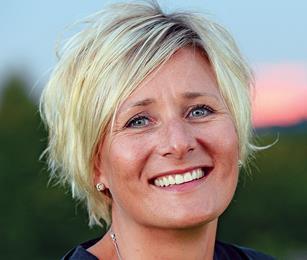 A director and co-owner of a multi-million pound enterprise, Yolanda Ibbett tells Catherine Larner how she and her husband struggled with their wealth before they discovered a fresh vision for their business

Growing crops, creating renewable energy, renting out homes and offices, or… selling a BMW 5 Series through a network of car dealerships: which business would be most pleasing to God?

We all make judgement calls in our lives as Christians and, representing the third generation running a multi-million pound family business with four quite diverse strands of operation, John and Yolanda Ibbett were no different.

“Farming and renewable energy seemed very worthy,” says Yolanda. “It was all about tilling the land and producing food. Selling cars, morally, didn’t feel quite where God wanted us. Car salesmen can be a hardnosed bunch and we were paying some people extraordinary salaries. It didn’t feel very edifying running a car dealership. As a Christian I felt I wanted to cover it up.”

John had taken on running the company, Bedfordia Group, from his father and for years the couple had been grappling with the concept of wealth generation and how they should respond to it. They knew they weren’t being led to sell up and give all the money away – nor buy a yacht and travel the world – but still they weren’t sure of the contribution they were making in their daily lives.

“We were really wanting to serve God and to be good Christian ambassadors,” says Yolanda, “but we were often disappointed in our lack of opportunity to show our faith.”

Both from Christian homes, but from different traditions, Yolanda and John met 23 years ago when they were attending a church plant led by an energetic, dynamic pastor. John was there with his then wife and three young children. Yolanda joined as she sought to break away from her strict reformed upbringing.

“I grew up never doubting there was a sovereign God, but there was a heavy emphasis on sin, sometimes at the cost of grace,” she says. “There was always an underlying fear of death, hell and eternity, and a lack of assurance of salvation.”

Over the months at the church plant, Yolanda was ultimately able to give her life to Christ and was baptised. Just six months later, the pastor tragically left the church, taking John’s wife with him.

“There was a lot of hurt,” Yolanda says, and the shock was wide-reaching. Nevertheless, her faith was unaffected. “My faith is in Christ alone, not in the pastor, the church or fellow Christians and I am so grateful to God for the assurance he has given me in that.”

Yolanda and John married some time later and focused on providing a secure family life for the three children, as well as continuing to meet the challenges of the multi-faceted business.

John was now chief executive of the family business and when the managing director of a finance company within the group at that time left, Yolanda was asked to step up to the role.

“It was never discussed that I would be involved in the business,” she says. “But my degree was in banking and finance, and I’ll turn my hand to whatever needs doing at the time, so the next thing I knew I was general manager with a £16m lending book and seven staff to manage.”

Today Yolanda is the Central Services Director of the group, a board member and very much involved in the strategy of the company and overseeing HR, values, culture and marketing.

“I’ve never had particular aspirations in my career,” she says. “My whole working life, I’ve been thrown in at the deep end and you have two choices – you either learn to swim or you sink. I’ve been fortunate in that God has given me enough skills so that I can keep my head above water.

“Never underestimate what God has planned for you or the skills he’s given you. We are children of God and he chose us for a purpose. Our whole life is a process of working out what that purpose is and grasping all the opportunities God gives to us, great or small.”

She believes that we are all capable of great things and wants to see more opportunities for women in the Church.
“We are sending our daughters to school and university to get degrees and high powered jobs. They are capable of much more than making a quiche for a ‘bring and share’ lunch!”

For Yolanda, her expertise as a strong businesswoman has been engaged by many para-church organisations – the LICC, Care for the Family, Bible by the Beach, The Messengers serving the persecuted church in South East Asia. These are bodies which the couple have found helpful and inspiring themselves, so wanted to lend their support.

In the couple’s family life and in their work, they felt the dilemmas they were facing in their business and weekday lives weren’t always being addressed in the teaching they were receiving.

“We very much had this sense that we were doing it alone and that, as Christians, we were working things out on the hoof all the time.”

They needed more than their local church was offering, and in attending All Souls Church in London and courses run by the London Institute of Contemporary Christianity (LICC), in particular, they gained a new direction and assurance.

“It was a lightbulb moment,” says Yolanda, of attending a presentation at the LICC Executive Toolbox course. “Mark Greene gave a talk on the role of work in creation – that God himself worked six days and then rested, and this was all before the Fall. Mark taught us that in our own daily work, we were playing a crucial role in the flourishing of God’s creation.

“Suddenly, instead of feeling guilty that we were creating wealth within the business, we realised that what we were doing in our work was deeply Christian.” In running a business employing 400 people and putting wages in their employees’ pockets month by month, they were feeding families, preventing poverty and contributing to the flourishing of humanity.

“We must have had an inkling it was right and good because we hadn’t sold up and donned sackcloth and ashes, but we had struggled on and suddenly everything now had context; it had meaning.

“Then you backfill and we realised that the four core values on which we were operating our business were the most biblical values you could come across – striving for excellence, building strong business relationships, developing people and teams, and acting responsibly and with integrity. We hadn’t actually sat down with the Bible and drawn out some verses to reach these values, but it was inherent within us, all part of God’s creative good order.”

She believes that with the Holy Spirit living in us, we are guided by the fact that we are children of Christ in everything we do.

“We are all full-time Christian workers for the Lord,” she says. “It’s not just about what we tithe or put in the collection plate on a Sunday. Actually, what we are doing Monday to Friday is just as much an integral part of God’s rich plan for our lives and for his salvation plan.

“The more I go on in life, the more I realise our faith is completely central to the way we do things,” she says. “Jesus came to serve, not to be served and this subtly influences our own attitude, of not seeing ourselves at the top of the tree, but being at the bottom supporting those above, and seeing everyone as equals in God’s sight.”

Yolanda also believes that there is something to be celebrated in the business, and in life.

“I recognised that God had created the most outrageously extravagant things in this world and these aren’t wrong, it’s our attitude to them that matters. Imagine the world without cars, without transport and without things of beauty . . . Suddenly I realised it’s OK as a Christian that I bought a jumper or drove a car in a bright colour: it didn’t have to be grey!”
She has found that their company values have drawn people to their business. “People are attracted to the light,” she says.

“There has to be something about the fact that God’s spirit lives in us and that people see that despite us.”
The influence that John and Yolanda have made on the lives of their employees was revealed to them when they sold the group’s car business division last year.

After 12 months of confidential negotiations, it was expected that John and Yolanda would leave the company as soon as the deal was signed, officially handing it over to the new owners who would then announce the sale and introduce themselves to the staff for the first time.

“I remember when we were getting near to the completion of the sale and we were talking about this detail, and I thought ‘no way’,” says Yolanda. “I couldn’t do that to our staff, who had loyally served us for many years.”
John and Yolanda introduced an element into the process after the deal was signed which allowed them to visit each of their three sites to thank their staff personally, ahead of the new owners arriving.

“It was probably the most emotional day I’ve had in my life,” she says.

“One girl had worked for us for 16 years. She had worked her way up in the service department, a real grease monkey! She had done really well and had always been a great member of staff. She said ‘I can never thank you enough for the opportunity you’ve given me in my life. You were the ones who gave me a job when no one else in this world believed in me.’

“I don’t think I had ever understood that the culture we had developed was something that they had loved, they had committed to, that they were loyal to.

“It was all terribly humbling, but we’re not taking back any of the glory. God lives within us. Never, never, never underestimate what God is doing in you, all those little things. If you give even one cup of water or Starbucks coffee in Christ’s name and you get a good response, you will want to give another one, I guarantee it.”