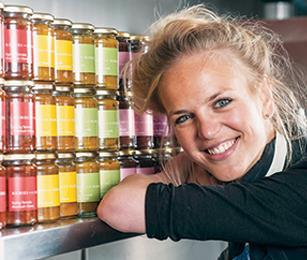 When Jenny Dawson realised how much food was going to waste, she wanted to do something about it. She tells her story to Amanda Pilz

Reduce, re-use, recycle! We hear so much these days about how we can better manage the world’s resources. We follow waste disposal rules, take more interest in where and how our clothes and food are made and think of ways to reduce our carbon footprint.

Yet it might still come as a surprise to hear just how much food is still going to waste.

Growing up in a farming family in Scotland where dinner table discussion often focused on sustainability, Jenny Dawson – now aged 29 – was probably more environmentally aware than most, but even she was shocked after reading statistics on food waste.

“Back in 2010 I was reading an article about food waste which said in the UK alone 18 million tonnes of food ends up in landfill, costing an estimated £23 billion. It was something I hadn’t really thought about before, but the more I read about the scale of the problem – that we are throwing away a third of what we produce while a billion people go to bed hungry every day – the more I felt moved to do something.”

At the time Jenny had a lucrative job with a London hedge fund and was enjoying a good standard of living. But, one day, she decided to set her alarm for 4am in order to cycle to New Covent Garden Market in London to see for herself what happened to unsaleable food.

“I found it exciting to be at this market which ran through the night, getting fruit and vegetables to people’s doorsteps the next day. But 50 metres away was a pile of unsold produce, and I still remember seeing a pallet of beautifully packaged mangetouts from Kenya. I couldn’t see anything wrong with them. If I’d grown them in my own garden I would have eaten them.”

Cycling home from the market Jenny decided to turn her thoughts into action. As a child she had seen her mum making many different varieties of chutney and so she resolved to do the same with the discarded food she had seen at the market. This was the beginning of her business Rubies In The Rubble.

“I got together with a friend and we set up a kitchen in the vicinity of Old Spitalfields Market. We regularly had pallets of fruit and vegetables delivered and spent the next two-and-a-half years peeling them! But I was very naïve about how much time and energy it takes to make the product, get it onto a shop shelf and into someone’s basket. It was very labour-intensive so wouldn’t work in the long term.”

To tackle this problem she began to employ women who had found difficulty finding work. The women were usually living in hostels, having been homeless, ex-offenders or addicted to alcohol. Things got better once she was no longer spending all her time in the kitchen. However, even employing the women presented its challenges.

“It was hard because we were a business, not a charity and we found that our relationships with these women were more important than the employment itself. It was a learning process for me. I realised you can’t just give someone a job; they have to want the job, so it meant loving them into it, making them feel valued and changing their mindset to believe in themselves. So, in terms of the business, this again proved to be unsustainable in the end. Thankfully, about half of them went on to find other jobs, although for some it meant a return to their struggles.”

Jenny hopes to be able to renew this initiative, but at present the chutney is being produced in Devon and Somerset. Around 1,000 jars are produced every week, using around 600 kilograms of waste fruit and vegetables. Current outlets for the chutneys include Waitrose in London, 2,500 independent delicatessens, Fortnum and Mason, Selfridges, Harvey Nichols and a London market.

She hopes the brand will expand to include fruit juice and compotes, soups, dried fruit and smoothies, and has plans to do similar work in Zambia.

Jenny makes it clear that she is not on a moral crusade against food producers and retailers. “I think the root of this excess is hard to pinpoint because it’s happening for so many different reasons. For example, last year, British farmers had a good crop of apples and pears, but that doesn’t mean we all start to eat double the amount of apples and pears. So there are a lot they have to let rot.”

Nevertheless, Jenny believes that it’s the consumers who are largely to blame because they cause unpredictable human consumption patterns. For example, deciding at 4pm what they are going to eat for their evening meal. At the same time, farmers are faced with unpredictable weather patterns so they never know whether they will have a good crop or not.

“Food waste happens at different levels in the supply chain in different places,” says Jenny. “In developed countries it is often in consumers’ homes, on the shop shelf or at the sorting process where food might be rejected because of how it looks. Some of the reasons for food waste are silly, but the supermarkets say if they started putting out really wonky carrots and cucumbers of different shapes, people wouldn’t buy them. A lot of it comes down to consumer demand, so change is needed all round.

“The biggest challenge for me has been my change in lifestyle. My friends were all making career progress, driving nice cars and so on. I’m living in an ex-council flat and whizzing around London on a bike. They asked me how I was doing this, but I don’t think I had any fear – my faith meant I wasn’t defined by my job title or how much money I had. I know God is always with me in whatever I am doing and that he always wants the best for me. Fear of man can be a stumbling block, but without it you’re pretty powerful and unstoppable.

“The idea of Rubies in the Rubble came out of my faith as well. My church’s theme is renewal, not just of people but also renewing the world to how it was created to be. It’s about really valuing what we have and being guardians of that, no matter whether it’s a wonky carrot or people who society has discarded.”

Find out more at www.rubiesintherubble.com

+ Amanda Pilz is a freelance writer based in London