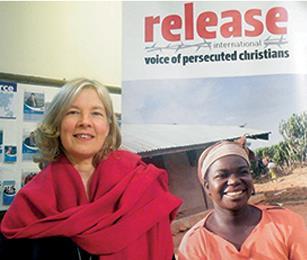 When Liz Kovar was invited to attend the Release Women conference in North London earlier this year, she feared feeling overwhelmed by what she might hear, but in fact it proved to be an inspirational day

I very much wanted to support work amongst persecuted Christians, but I hesitated about going to the Release Women conference for two reasons.

First of all, I was worried that I’d feel overcome by the many harrowing stories of pain and persecution, and, secondly, I was unsure of quite what I could do to help.

As it turned out, I needn’t have worried on either account because the conference met both those concerns head on. The biblical verse underpinning the day was from Isaiah 61: that God can bestow on us “a garment of praise instead of a spirit of despair” and that’s precisely what we then experienced God doing.

There were visiting speakers from Sri Lanka and Central Asia and, even though both women spoke of churches being destroyed, pastors being beaten and murdered, and women being beaten and raped the final note was not one of despair, but one of hope. Out of the ashes of the burnt churches, new churches were forming; where pastors were murdered, their widows were now leading the churches and where women were beaten and homes destroyed, Release was now working to provide counselling and rehousing.

The courage of the speakers themselves, who are risking personal danger in order to bring great change to their countries, was both humbling and inspiring.

So despite, or rather because of, the tales of suffering, the worship band led us in a period of heartfelt praise, singing out to the God who strengthens, restores and overcomes. We experienced an overwhelming feeling of solidarity and connection with the women whose stories we’d just heard.

It didn’t matter that we had never visited their country, spoken their language or eaten their food. There was an intimacy in sharing the details of their suffering, and standing together with them in the Spirit. Worship, in the face of adversity, is a powerful weapon and, as we sang, there was a sense of doing battle alongside persecuted women across the globe.

We also have another weapon to hand, which is particularly powerful when we’re feeling overwhelmed and that is prayer. I think the central point on which the whole day turned was the ‘Prayer Works’ sessions: one in the morning and one in the afternoon. These were hour-long sessions, where we were split into smaller groups in order to pray together for the countries where Release is working.

Instead of being left to pray in general and vague terms, different representatives from the different countries gave us specific pointers for prayer. These allowed us to pray straight into the relevant issues, giving our prayers the power and authority to combat any “spirit of despair”.

For Egypt, we prayed for women in the traditional churches who don’t yet know Jesus for themselves, and for the Evangelical Church, that it might be an authentic public voice for the Christians in their country. For Central Asia, we prayed against the doubts and fears of their pastors and for peace between the different ethnic groups in the region.

A theme that kept recurring, amongst the different countries, was the implementation of new laws whose sole purpose is to prevent the churches from functioning. Either a church has to have a minimum membership which is unrealistically large; or a church needs to register with a state department which isn’t yet in operation, therefore making registration impossible.

It’s difficult to imagine such restrictions and such violence from the safety of our own Western pews; but what a different perspective it put on our own suffering, and what a lesson in how we can choose to stand in the midst of it. We might not face a fraction of what our persecuted sisters suffer, but we still despair when we forget to use the weapons of prayer and praise that God has given us. Wielding these weapons, when we least feel like it, is when we really experience the power of God – to lift us out of despair and into the joy that comes from knowing him.

Perhaps the most poignant moment came when the news was announced that a Christian woman in Nigeria called Nvou had died of ‘a broken heart’ just days before the conference. Nvou had twice been attacked and twice lost her home, during which time Release had ministered to her and given her the strength to carry on.

It was particularly poignant because it was her face, smiling out at us from several of the Release posters; her eyes shining with the joy of the Lord. We were invited to gather in front of the posters and join hands, whilst we gave thanks for Nvou’s life and witness, and prayed for the family she left behind.

So, despite my fears, I came away from the conference feeling uplifted, not downhearted. I had stood alongside my unseen sisters. I had fought alongside them, praised and prayed alongside them, and watched as God replaced a spirit of despair with a garment of praise.

+ To find out more about the work of Release contact www.releaseinternational.org or write to them at: Release International, PO Box 54, Orpington BR5 9RT.