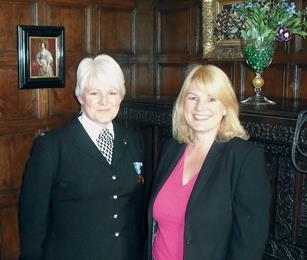 Working her way up from Constable to Detective Constable in the Criminal Investigation Department, Eileen has managed sex offenders, worked in Child Protection and with the Domestic Violence Unit in an economically disadvantaged area of Liverpool where she was born and brought up. She also served as a family liaison officer for the families of murder victims.

In my last seven years with the police, I worked as a schools police officer in a Catholic senior school. The aim was to build relationships with the children to try to steer them away from a life of crime, and educate them about the law and how it would affect them. We also tried to help if they got into any trouble, experienced bullying or had family problems. Our Chief Constable was keen to build good relationships and to show the community that the police aren’t what you see on the television; they are real people there to help.

At first, many of the pupils would not even look at me. But, by the time I was leaving, they would come and ask to talk to me, and they’d sit and tell me all kinds of things that were going on in their lives. These were hard to reach children – many of their parents had been in trouble or arrested – but they would approach officers driving around saying, “Have you seen PC Eileen? Do you know her?” The children would say to me: “We hate the police, but we like you”, so I used to take other officers into the school so they could see that they were OK too.

I think my faith helped me in my police work to see the person behind the crime. I knew I could so easily have gone the same way as many of my former classmates, but I was lucky to have parents and others who protected me. The Church was a big influence on me when I was young, but it was when I reached my late 30s that I started seeking again and I came back in earnest. I didn’t really talk about my faith until I attended a Christian Basics course. I actually did the course twice before I made a definite commitment and then I went back to work and said: “I’ve been on this course and I have committed my life to Jesus!” Some of my colleagues laughed and said: “What! You?” But other conversations started and it came out that others had been going to church and wondering about their faith so it was really good.

I got more involved in my local church and then the vicar suggested I consider ordination. I had always considered my job with the police as a very worthwhile vocation, so I began to look into self-supporting ministry, which would allow me to remain with the police. Many of my colleagues came to my ordination and they were quite emotional. They told me: “Oh! It’s just so great. We’re so proud of you. It’s marvellous how you’ve done this.” My husband actually became a Christian during the ordination service at Liverpool Cathedral, which was marvellous.

After ordination, I became a police chaplain, along with my day-to-day police duties, and then I was asked to lead the church here in West Lancashire. For nine months I led the church alongside my police work and then when I retired last summer, I became a full-time minister, though I am still self-supporting.

I think the best part of my job as a minister is working with the children and their families. I love the fact that people feel they can trust me enough to tell me some of their problems and that maybe they get some healing from the release of telling me. I love teaching people and I’m really excited about the after-school church club we run. It began with a confirmation course last year. I wanted to grow a fellowship of youngsters who were comfortable around each other and comfortable with God being spoken about and in their lives. The aim of the club is to have fun, learn about God, learn about Jesus and how to be like him – and have refreshments!

My passion for children’s ministry stems from my work as a schools police officer. When I was working in the Catholic school, I joined them on a visit to the Catholic Cathedral in Liverpool and they were talking about their saint, Father John Bosco, who learned to juggle, walk a tightrope and other things because he believed children responded to fun and he wanted to make the Gospel attractive to them. I was reminded of the fun I had as a kid when I used to go to church club and the evangelists who came and I decided I wanted to be like that. I believe if we have a chance to show children the love of Christ and plant that seed in them, they will never forget it.

I’d like to encourage women, in particular, to have more confidence in themselves. I’m indebted to Neil Short, the vicar who encouraged me and my sister Elaine to pursue a calling to the priesthood. Without him, we probably wouldn’t be where we are now. So, if someone sees something in you, have the confidence to explore it and don’t be fearful because God won’t let you down. You will be put in places where you think, ‘How did I end up here?’ but you can be confident in God, that he will put you in places where he knows you will grow.