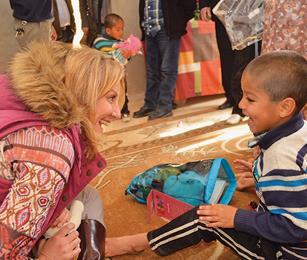 Catherine Ashcroft, an experienced volunteer working in Jordan, tells Mandy Pilz why Europe’s open door policy is not the answer to the current migrant crisis ...

For most of us our television screen is the nearest we get to the ongoing crisis in Syria. But Briton, Catherine Ashcroft, lives in Amman, the capital of neighbouring Jordan, and is seeing first-hand the impact it is having on both Syrians and Jordanians.

“The stories are simply heartbreaking,” says Catherine. “One man I know saw one of his brothers being beheaded on video. Another of his brothers was tortured to death by the Syrian government and a third brother has gone missing. I just don’t know how anyone can recover from that. My friend’s uncle was beheaded because he worked for an oil company. His family is living on the streets along with a four-day-old baby.”

Catherine, who is a Christian and has lived in the Middle East for nine years, is the founder and director of Helping Refugees In Jordan (HRJ) which, since 2011, has sought to partner with local charities to help Syrians who have fled their country due to the continuous war and now, the threat of Islamic State (IS).

“In early 2011 there were a few skirmishes and bullets fired,” she says. “People were hoping it would be just a few localised riots and wouldn’t take off. So the Syrians who arrived in Jordan were welcomed. They were included in the schools and found homes to rent.”

But as the crisis escalated, the numbers of people escaping to Jordan continued to increase. There are currently 1.5 million Syrians in Jordan, 20% of the population, with 750,000 registered as refugees.

The refugees are being absorbed into local communities, but this is causing tensions.

As a result, the government has cracked down on illegal working. It is very expensive for Syrians to get a work permit and if a Syrian is found to be working illegally, their family is put into a camp and the worker is sent back to Syria. All government medical services are closed to Syrians and schools will not take any more Syrian children.

When Syrians first arrive they go to refugee camps and are given a tent or caravan and basic supplies. Zaatari refugee camp, which is home to 80,000 people, started with just a few tents, but now has paved roads, schools, businesses and workshops.

Azraq refugee camp has the capacity for over 120,000 but is home to 15,000 refugees. However, they are not allowed to set up businesses. “It is like an enormous open-air prison,” says Catherine. “There’s nothing to do. It’s absolutely desperate. There’s one, big supermarket and people have to walk miles to get water. The camps are unattractive, so the minute people arrive they want to leave. I feel the same when I visit. After a few hours, I feel depressed and drained, and I don’t even live there!”

Eighty-five per cent of Jordan’s Syrians are not in refugee camps, but their living conditions are also difficult. “There can be 15 people squeezed into a two-room apartment,” relates Catherine. “Others are making homes in people’s basements, shop fronts and storage rooms. We met people living in chicken coops and makeshift tents made from any scrap they can find. I don’t know how they do it.”

For those who do have access to services, it is still a struggle. “A massive amount of bullying goes on in schools,” says Catherine. “The Jordanian children will have been brought up in the same village or town, but a Syrian child refugee is not only a stranger but also one who is grieving, traumatised and wearing hand-me-down clothes which makes them an easy target. The Syrian kids have found it really tough.

“Everyone is just muddling along, realising it is a long haul. There are huge stresses for people trying to lead a normal life. At the same time they have got family still in Syria because the majority of Syrians are still there. It’s very distressing.”
Four years ago, Catherine realised nothing was being done to help Syrian people in Jordan so she asked Mercy Corps, a big international NGO, to introduce her to some local, reputable charities including churches. This was the beginning of HRJ.

“I am a consultant with Mercy Corps which gives me the legal operational cover. I try to assess the needs on the ground with the 170 charities, schools and ministries we work with. We then try to fill that need either by getting a particular donor or through fundraising. I once ended up buying 21,000 toothbrushes and 32,600 bags of washing powder to add to thousands of new arrival packages. Our objective is to enhance existing programmes and fill any gaps.

“I run HRJ from my home,” continues Catherine. “My double garage is the sorting centre, my basement is the charity shop and my front room is where we sell Syrian crafts and hold meetings. I have 200 volunteers and, last year, supported existing programmes and distributed supplies valued at almost half a million US$.”

With three out of five Syrian children not having safe access to regular education, HRJ started a school which now has 95 children and is currently setting up four new schools in rural areas, as well as a women’s centre.

However, HRJ was hit hard when the World Food Programme stopped providing food coupons to refugees outside of the camps. “That is a massive problem for these families,” says Catherine. “Month by month, they have to choose between feeding their families or sending their children to school. It’s tough. So our purchasing has to take that into account, but we also pay for anything from wheelchairs to renovating Jordanian schools.

“Regionally, the situation is extremely complex. There is the realisation that Syria will never be the same again. If Damascus falls to IS there will be a massacre of biblical proportions. There will literally be blood flowing down the streets. Everyone I know is getting their family out. They’re absolutely terrified.”

Catherine realises that with so many players in the region there is no simple solution. She thinks a partitioned, but stable Syria might work if security can be guaranteed, and believes strongly that the international community should invest more in the countries surrounding Syria.

“I am a firm believer in keeping people in their own region and culture. It’s better for Syrians to live in Jordan than to make dangerous journeys and use their last resources paying human traffickers,” says Catherine. Europe’s open door policy has only resulted in many deaths and given billions of dollars to traffickers, smugglers and criminals. People will stay if there are work opportunities, good infrastructure and education. The UK has done a lot here to help with this.

“What’s needed is a united support against extremism, regardless of religion or background. If other countries will support Turkey, Lebanon and Jordan, and help them to ensure that there are enough medical and educational facilities, enough affordable shelter and that people can work without fear of reprisal, people will stay and rebuild their lives here.

“European countries should also look long-term and ensure there is a ‘right to return’ policy for Syrian residents, so that when the situation improves they can go back and rebuild their country. Syrians do not want to leave their country, but the longer they are away, the less the draw to return and rebuild will be.”

How to help the Syrian refugees in Europe

+ Always give to reputable charities. If refugees are coming to your area, your local council should be able to advise on local charities who are involved in helping to meet their needs.