On the fringes of society 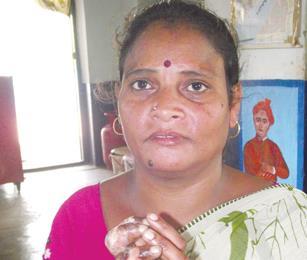 "Life is already tough for women in many parts of the world, but when a woman has leprosy, she faces not only disability, but exclusion and even violence as well." Charlotte Walker reports ...

Despite Bangladesh having a female prime minister, women are very much resigned to occupying a second-class citizen status. And those affected by leprosy, a disease still shrouded in the stigma we read about in the Bible, almost pale into insignificance.

There is a strange paradox that a family has to reach a certain level of poverty before a woman can leave the home and earn a living. Yet when the woman actually goes to work and brings home a wage, her status is raised not only in the eyes of her husband, but her community, not forgetting giving her self-confidence a boost.

Young, nimble-fingered women can be seen flocking to the densely-populated cities where they can gain work in garment factories and expect to take home the equivalent of US $40 a month. It might not seem a lot to us, but when the primary alternative is subsistence agriculture, it’s pretty appealing.

However, women affected by leprosy are largely excluded from entering the clothing factories because of the disabilities they develop, such as clawed hands and numb feet. Stigma surrounding leprosy sees women hide tell-tale skin patches for fear of being ‘found out’ by their husbands. In fact, until the 1898 Lepers Act was repealed in Bangladesh in 2011, leprosy was grounds for divorce (also viewed as a great social stain) as well as the century-old act having the power to confine leprosy patients to state-run institutions. Despite officials admitting the law contravened human rights, old assumptions are hard to shake.

The combination of being at your lowest ebb physically and being rejected by your family because of your condition is something that Momina is more than familiar with. Coming from Durgapur village in the Gaibandha district of Northern Bangladesh, the 50-year-old’s husband divorced her upon hearing she had leprosy, taking with him their son and three daughters.

Despite being shunned by villagers, her brother gave her a place to stay. Her feet are numb as a result of leprosy-caused nerve damage and she cannot walk far without developing ulcers that, if they become infected, could result in her lower legs being amputated. This greatly limits her earning capacity. But Momina wants to work, not least to repay the debt she feels she owes her brother.

The pioneering Food Security for Ultra-Poor Women project is a European commission-funded project run by a consortium of charities. It recognises the struggle that women like Momina face. The Leprosy Mission heads up the ‘disability’ aspect of this life-changing project which has seen more than 900 leprosy-affected families benefit from a new source of income. The majority are so-called women-headed families, some as a result of their husbands being unable to work because of leprosy-caused disabilities. Others are lone leprosy-affected women like Momina desperately needing an income. Where there is a husband on the scene, empowerment support is given to the woman breadwinner, designed to build her confidence in contributing to decision-making as to how the money is spent.

Momina was given 10 chickens, a goat and a cow by the project. The chickens have since produced 12 chicks and the goat two kids. She is able to sell eggs and milk and says she is “able to hold her head high” in the community. The serenity she radiates since experiencing the camaraderie of being part of a 26-member, women’s support group is impossible to miss. She even has 600 Taka (around £5) worth of personal savings as part of a cooperative arising from the self-help group, enough to catch her the next time she hits tough times.

+ One third of all women are subjected to violence, whether in times of armed conflict or behind closed doors at home.*

+ Women affected by leprosy make up some of the world’s poorest and most marginalised groups.