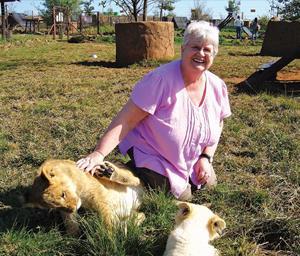 How I survived a mission trip

Two years ago, Jean Halfacre was part of a group from her Essex church who went on a teaching mission to Mozambique. She loved it, but admits she was rather ill-prepared …

Now, this is not going to be a story of heroism, but an account of how God dragged me through the whole mission trip experience despite myself. I did so many things wrong that I sometimes wonder whether I am fit to be allowed out of the house – let alone go trotting off to Africa.

When I arrived, I realised that most of my pants were still in the airing cupboard at home. I did have three pairs with me, but with water being in short supply it took quite a bit of ingenuity to wash out these essentials (more on shortage of water later).

Robin, our leader, had quite a few bouts of stomach problems and used up a lot of what we had, so when I had an upset stomach, we were all rummaging around to try to find some Imodium. I found my pack under some unopened junk mail a week after we got home. I was wondering where they were!

Big mistake. My feet and legs swelled up on the first flight and didn’t go down again until we got home. This became a bit of a problem because I had only taken ‘Crocs’ to wear. Although they fitted beautifully on my unswollen feet, they had to be forced onto my puffed up feet (much application of talc). They were also tremendously sweaty. I did have a pair of flip-flops to wear indoors though.

The ‘rollerball’ kept jamming solid time and time again. I imagine these things are not meant to be used when the temperature is in the 40s. I should have taken a spray deodorant as back up. All the cosmetics, medicine, etc I have say, ‘Store under 25 degrees’. By the way, I found Lanacane powder to be absolutely marvellous! Being large, I find that I very easily get sore under my breasts, but this kept all soreness away – that and bits of material tucked under my bra.

But there were also more positive experiences and I wouldn’t have missed them for the world.

I learnt to appreciate the small things in life

The first week we were in a town called Tete and were put up at the Hotel Paradesio (Paradise Hotel) – an optimistic name if ever there was one, but we grew to love it in the end. The rooms were basic, the toilets didn’t flush (there was a large bucket with a jug with which we were supposed to flush the loo and also use this water for washing), but we all had our little bit of luxury. Brian had a small hanging area, I had an electrical socket in my room and a small refrigerator, and Janet and Robin had a loo that flushed! We trooped into their room to gaze at this wonder.

The water was off most of the day, but came on for a few minutes in the evening. The cry would go out, “The water is on!” whereupon we would all dash into our respective rooms, fling off our clothes and get under the shower. But, just as we had got ourselves thoroughly soaped and shampooed, the water would go off again! No complaints about the meals though. The restaurant was wonderful – lots of choice and the food was beautifully cooked. There was a rat running around the restaurant one evening, but it didn’t put us off our meal.

I discovered I was dependent on hot drinks

You are going to think that I am a serious wimp, but I really did underestimate my dependency on hot drinks – coffee usually – first thing in the morning and last thing at night. I know I did not sleep as well because I didn’t have a hot drink to take to bed with me – even in these temperatures. Plus, I guess I was experiencing caffeine withdrawal.

I could make a good practical decision

I sewed pockets on all my skirts and trousers. Into these went everything I might need during the day – lots of toilet paper, a small pack with paracetamol, throat sweets, asthma inhaler and more. We had to carry all our valuables with us because the hotel rooms were not secure. We had a large amount of money with us for the next missionary couple, plus passports, debit and credit cards. We prayed a lot for protection as we walked to the church every day.

Despite the challenges we made a difference

The first conferences were held in a disused cinema, which was also the church, and it had enormous holes in the floor. The tip-up seats were wonderfully comfortable, though, and I kept dropping off. At mid-morning, everybody had tea and a cake, but the tea was very sweet and none of us could drink it, so from then on we had our own unsugared tea delivered in a washing up bowl.

Towards the end of the week, the owner of the cinema decided to change the electric meter and so cut the electricity off without warning, which meant no fans, no lights and no microphones. We got round it somehow, but we were told it would probably be months before the new meter was put in.

The teaching was based on Colin Dye’s book Worship in Spirit and Truth but greatly simplified, plus stories about Abraham and some parables from the New Testament. Everyone at the two conferences – mainly young pastors – seemed to be really appreciative of this teaching and many begged us to come back the following year. They were all absolutely lovely, with a real desire to know more of God.

The women’s most immediate need is to be taught to read, so they can read the Bible for themselves and also teach their children. Two missionaries we visited – Eugene and Tina – have initiated literacy programmes for women in several churches they are responsible for, but I’m afraid women are not regarded as very important in Mozambique – except by the missionaries of course.

Would I go again? Definitely!