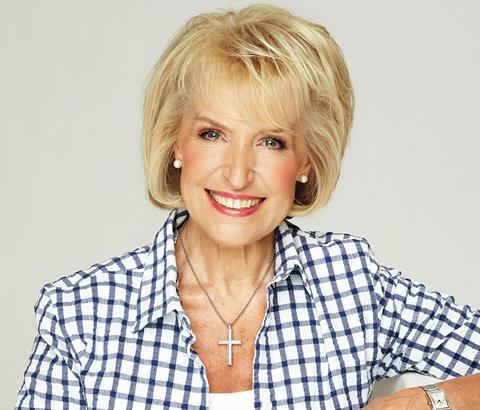 I love to see women grow in confidence

Rosemary Conley celebrates 40 years in the diet and fitness industry this month.  She talks to Ali Herbert about her life, business and faith

You run a hugely successful business – diet and exercise programmes, online TV shows, food products and more – but how did it all begin?
Back in 1971 I started one class in the local village hall where we lived, with help from a few neighbours. That was a really big step and very exciting, but I had no ambition other than to run that one class. Then, because it was so successful, I gave up my job as a secretary and opened more classes. As well as weight loss, we did ‘good grooming’ as we called it, which was basically making the most of yourself and was very popular. Then we added exercise. By 1980 we had around 50 classes running around Leicestershire and they were very well attended.

What made you start that first class?
I’d been overweight and lost a couple of stone myself. I’d been to Weight Watchers and lost some weight with them, but then put it all back again plus more. So I knew what a slimming club did: you get weighed, talk about food and there is an element of companionship in the group. I’d done a ‘good grooming’ course when I was 18 and I’d also been a Tupperware dealer, so I was used to standing up in front of people. On top of that, I was a secretary so I knew how an office ran and, at the time, I was married to an accountant, so I knew I could get the figures bit sorted out. It was putting all these different ingredients together. And people listened and it worked, and they came back the next week and were ecstatic at the results. And I thought, “Well I’m actually enjoying this, and I’m my own boss so that’s very exciting!”

Has your business always been a success and why do you think your particular programmes have caught on so well?
I think it was a combination of things. In 1980 I was approached by IPC Magazines and they bought my business. I ran it nationally for them, but it was a disaster. My marriage failed, the whole thing was ghastly. It was a most unhappy time. I was very bruised when they closed it down and I went back to running my own classes again. Then in 1986 I wrote a book The Hip and Thigh Diet which was published in 1988 and was hugely successful – and it really did work. In 1993 we went back to opening classes nationally, but as a franchise. My time with IPC made me stronger without question and I learnt lots of lessons about how not to do things.

I’ve also combined the two elements of diet and exercise. There isn’t anybody else who does both because they are quite difficult and separate. I’m not an academic and I’m not interested in taking degrees, but I’ve qualified as an exercise teacher and have surrounded myself with brilliant experts who check everything that I do, so what goes into my books is really sound.

Did you have a healthy upbringing?
I think I would consider it a healthy upbringing. I was quite a sickly child because I had terrible asthma – I still have it. As a child they didn’t think I’d live beyond 10 years old and I spent three months in hospital when I was eight. But my parents were always active and we ate good food at home. While there were cakes around, we didn’t eat biscuits – and of course we didn’t eat lots of fried and fast food that is readily available now.

Do you think the nation’s diet has changed a lot?

Oh without a doubt. I was born just after the war and the aftermath of that was felt for years. I can remember seeing ration books and there was no doubt that you were careful about what you spent. My father would grow our own vegetables and he would be endlessly working in the garden – which was his full-time hobby outside of running his business. Life is very different now.

These days we are also significantly less active in our everyday lives because we drive instead of walking or cycling, and when we get to our destination we’re likely to be sitting behind a desk or screen. So now we have to actually go and do something: join the gym or go to a class, or buy the Wii Fit. So instead of activity being your lifestyle, it has to be something you bring into your life, almost like a hobby.

Is it a fine line between looking and feeling good, and becoming obsessed?
Yes, I do think it’s a fine line. I can remember a time in my life when I was obsessed with food and was struggling with my weight. I thought about food the whole time. The more I thought about it, the more weight I put on, so I have been there. And while I’ve never had an eating disorder in the sense that everybody understands it, I think in a way I did have a bit of an eating disorder in so far as I was obsessed by food.

As far as image is concerned, with the advent of magazines like Hello and OK, everything is just so artificial. There is so much air-brushing and enhancement – people’s teeth are made whiter, wrinkles disappear, hair is made fuller and people are made slimmer. We’re surrounded with this image of unreality and yet people want to attain it. So you’ve got two sides here: one is unfortunately the person who becomes entrapped in anorexia and sees herself as fat when she’s not. And the other is saying, “Well I can never be like that, so I may as well eat this, I don’t care.”

There is a saying that to become healthy, all we need to do is ‘eat less, do more’. If that is true, why do we need so many diet and exercise programmes?
It’s about getting pleasure, being motivated and giving people confidence. The thing about dieting is that it is going to need some choices that are going to be quite tough – you don’t want to eat less and you don’t want to get hot and sweaty. So you’re going to have to sell it to yourself. If you are overweight and you’ve got high cholesterol, and your blood pressure is up and somebody says, “Look, this diet works. It’s going to be quite tough for the first month, but after that you will see such a benefit; you’ll lose a stone, you’ll feel so much better; you’ll then start getting into the habit of it and you won’t find it difficult.” And you think, “OK, well I’ll do it for the month and see how I get on.”

What keeps you motivated after nearly 40 years of being in this business?
I’m hugely motivated by the success that other people have. So I never tire of doing our photoshoots and meeting our successful slimmers. I take them to Marks & Spencer and fit them out with clothes, take them back to our studios for hair and make-up and put them in front of a camera. They see the photographs of themselves and cry because they cannot believe how fantastic they look. My diet and clubs have given them the tools to become toned up and healthy, transformed and confident. That is worth more than money – it’s the satisfaction that my job makes a difference.

How has your faith affected your life and business?
It’s the complete foundation of it. I’m extremely grateful that I am a Christian and in the business I’m in. I’m very satisfied with my life. I don’t take it for granted and am just very fortunate that God has given me the strength, the courage and the integrity to do what we do and do it well.

I also think we owe it to God to look after our body. Our body is a temple and we ought to look after the fabric of that temple by feeding it good food and keeping it in good order. But I must add that God loves us whether we’re 50 stone or eight stone. He loves us irrespectively and it’s really important for people to know that.

How do you maintain your energy levels for a busy life?
I still teach two classes a week – and I’ve just returned from ice-skating, which I took up when I was 60! I auditioned for the Dancing on Ice TV show which is why I started. I haven’t got on the show yet, but I can actually skate now so I might have a chance in the future! I think to maintain your energy levels, eating healthily, being happy and having a good relationship with God is the key.

Rosemary’s latest book The Secrets of Staying Young (Century) £20 is due out this month.