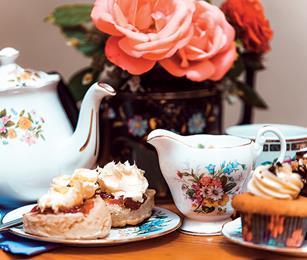 It’s 27 years since I first arrived at Lee Abbey, after escaping from my violent and abusive husband. We had been living in Portugal for a few years and I returned to my mother’s house in the UK with just £1 to my name.

I had lost touch with most of the people I knew, but somehow managed to find my friend’s husband’s hairdressing salon. Sue told me they had become Christians whilst I had been away and, through them, I came to faith. Sue then invited me to a Full Gospel Businessmen’s meeting, where I met David and his girlfriend, who had been part of the community at Lee Abbey.

Things moved fast after that. On their recommendation, I contacted the Abbey and was offered a week’s stay through their Bursary Fund, which provides free places for those who cannot afford to go there. It was bishops and vicars week, so I received some very good teaching and, at the end of the week, I was invited to stay and run the Tea Cottage.

I had no previous catering experience, but I had cooked a lot with Keith Floyd, who had lived with a previous partner and me for a while and had run our restaurants.

I told the warden, Mike Edson, I would stay for six months. He smiled and said, “You’ll stay as long as God wants you to”. So I stayed for two and a half years, during which I cried a lot, had regular counselling and received inner healing.

I loved working in the teashop and with the help of a fantastic team we won a number of awards, and were voted one of the top 100 best tearooms in the country by the Independent newspaper.

I used to ask the community how they knew when it was time to leave and they said, “Oh, you just know”. And so, towards the end of 1993, I just knew and I left to take up a new challenge as a chef on a private yacht.

A local friend had been taking me out on his yacht and I loved being out on the water, so I built up my experience and worked for a number of private charters. I was in my mid-50s, when most charter yacht chefs are in their mid-20s and I was usually the only Christian on board, but God gave me many opportunities to pray with the guests or captains I worked with.

It was an amazing lifestyle – I was usually treated like one of the family – but it wasn’t all glamorous. There were many rough crossings, times when we had very little water for washing ourselves or our clothes, blocked toilets, seasick guests and one occasion when the yacht nearly sank! But the Lord was in charge and I stuck with it, until 2007, when I felt it was time to return to the UK and be nearer my children and grandchildren.

I was happily working as a chef, but then in February this year, I attended an evening event at Lee Abbey whilst staying with some friends who are pastoral helpers there. My friend David asked me if I would ever want to return to be part of the community there. I told him, “No, never, you can’t go backwards.”

A few weeks later, the personnel manager, who had been sharing our table, rang me and asked if I would be willing to manage the teashop for the 2017 season and I found myself saying yes.

It took weeks of prayer, bleaching, scrubbing, sterilizing, painting, sorting, bookwork and finally baking to get everything ready, but I loved the challenge and have been working with a very talented team. I’m 74 now and working from 7am through to 5.30 and beyond is hard work, but knowing I serve the God of the impossible gets me through the day.

I believe returning has been God’s perfect timing. Some things have changed. A lot of the beautiful rhododendrons I remember have gone, but there are now en suite bathrooms, some lovely refurbishments and the wardens, Simon and Anne Holland, are doing an amazing job with the international community.

I have been asked to return for the 2018 season, which I am looking forward to and until then, I will be returning to Cornwall, where I now live. I have no idea what I will be doing over the winter months, but I know I can trust God to supply all my needs. The Christian life is such an adventure – I’m excited!