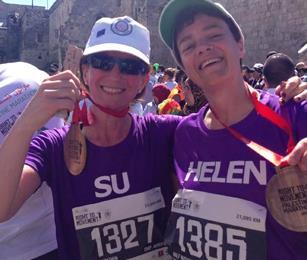 Having faced breast cancer herself, Su McClellan is more determined than ever to help women in the Middle East who don’t have the same support and access to care and treatment ...

Last spring, I wrote an article for Woman Alive about the challenges facing women in Palestine. In it I highlighted the fact that one of the biggest killers of women in Gaza is breast cancer, with only 40% of women surviving for five years after diagnosis. Just three weeks after submitting the article, I was diagnosed with aggressive breast cancer. Being told you have cancer are words that nobody wants to hear, but I kept thinking, “What if I lived in Gaza?”

Fortunately I’d caught my cancer early, but as it was a high grade tumour my doctors told me that they’d need to “throw the kitchen sink at it” . Surgery was followed by four months of chemotherapy, followed by a month of daily radiotherapy, and I’ll be on hormone therapy for the next 10 years. I feel so blessed to live in a country where I didn’t have to worry about the cost of my treatment – or indeed the supply of the drugs I needed. Thanks to the care I’ve had, I have a pretty good chance of surviving.

The thing that surprised me most about my cancer journey was the impact it had on my faith. I have to be honest and say that before cancer, I was hanging on to Christianity by the tips of my fingernails. I went through the motions of going to church, saying the right things in the right places, but I’d lost the deeper knowledge of God in my heart.

I’d read that meditation is helpful when dealing with illness, so I thought I’d give it a go. It changed my life. I used a mantra, and the one I chose at the beginning was the phrase from the Bible used more than any other “Be not afraid”. Spending 20 minutes a day resting in the arms of God gave me a peace and strength that carried me through all of my treatment, and I experienced an unprecedented level of joy.

The other great help during this time was running. I’ve been a moderately keen runner all my life but, over recent years, a dodgy knee had meant that I was hardly running at all. However, I was inspired by an 80-year-old woman who was about to run her twentieth marathon, having taken up running during her chemotherapy treatment 20 years earlier.

I was convinced that running would help me beat off the fatigue that comes with the treatment. So, tentatively, I started putting one foot in front of the other again. The chemo ensured that any passing tortoise would have overtaken me, but the slow speed ensured that my knee didn’t buckle. By the time I came to the end of the chemotherapy, I could barely run a mile, but with the gentle support of my husband I kept going.

I then read about the Palestine Marathon, held each spring in Bethlehem. It occurred to me that this would be a great thing to take part in to raise funds for breast cancer services at Embrace the Middle East’s Christian partner Al Ahli Hospital in Gaza City. My husband went out to a church meeting, and by the time he came back I’d signed us both up for the half marathon.

We were joined in the race by two other women who’d had breast cancer the previous year, one of whom had also had months of chemotherapy. They too wanted to raise funds for Al Ahli Hospital in gratitude for their own treatment, and between us we raised over £13,000.

Strange as it may sound, cancer has given me gifts, for which I am profoundly grateful. Through it all I’ve held the words of Isaiah close to my heart: “I will give you the treasures of darkness … that you may know that it is I, the Lord, the God of Israel, who called you by your name.”