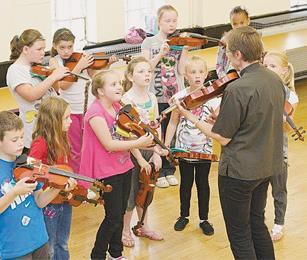 In a deprived area of Cardiff, children are learning to love and play classical music. Patricia Stowell went to meet the woman whose love of music is literally changing lives

"Just try that note once more.” The young violinist listens carefully to his music teacher and the sound of the violin resounds in the hall of the Church of the Resurrection in Ely, Cardiff. Nothing unusual in that – except we are in the middle of a housing estate that is listed regularly in statistics for deprivation and poverty. It has difficulty in throwing off its reputation as being a hard, problematic council estate, yet one special music project is helping to do just that.

Reverend Jan Gould, Priest in Charge of the Church of the Resurrection, Ely in the west of Cardiff, launched the project after she was inspired by a similar scheme in Venezuela called El Sistema. She explains, “Before receiving a call to the ministry, I was a professional viola player, playing mainly in a string quartet, but sudden major surgery meant that my career was cut short almost overnight.”

She continues: “I knew how successful El Sistema had been in transforming the lives of many children. These were street children who had been given an opportunity to learn how to play musical instruments. They learned how to appreciate music, gained in self-confidence and developed regard and esteem for others.”

El Sistema was founded over 30 years ago by politician and economist, José? Antonio Abreu, who was passionate about music. He was also aware of the dreadful poverty in his city, but he had a dream – that these children would learn to play and love classical music, and he began to bring that dream into reality by providing music tuition, initially for 12 children.

From that small beginning, the project grew, giving destitute children self-esteem and respect for each other and those around them. Edicson Ruiz, from a poor family in Caracas, was a young boy who joined El Sistema at the age of 11. Just six years later, he joined the world famous Berlin Philharmonic Orchestra, becoming the youngest member ever to play in this prestigious orchestra.

Jan Gould recalls how she set up the project. “I was convinced that if this project had worked in Venezuela, then a similar scheme could work in Ely, a large estate with many poverty-related problems, but where I could see a good community spirit. I had no musical instruments, no teachers – just a love for music and a real belief that this scheme could work. I contacted the Royal Welsh College of Music and Drama, hoping and praying that the students would be interested enough to get involved. My prayers were answered and, together with funding from the Communities First programme in Wales, I was able to buy 20 violins and five cellos.”

In 2010, the Making Music Changing Lives project was launched. A series of concerts, Feel Good Fridays, were given by the college students and children from local schools were invited to attend. For many, this was the first time they had experienced live music performed to an audience and it showed them that classical music could be fun.

The first summer school took place that year and, again, with the help of the college students, it was a huge success. That September, an after-school music club began. Further funding meant that wind and brass instruments could be purchased, allowing more children to benefit from the project.

Jan is enthusiastic about how the project has developed. “After-school music clubs now run in the church hall on three nights a week, allowing approximately 60 children from the age of eight to enjoy and appreciate music. The standard is high and children work towards music grades. It is a thrill to recognise talent and potential in these youngsters. We also have end-of-term concerts, giving the children an opportunity to perform in front of very proud parents, most of whom would have never been able to afford music lessons for their children.”

She continues, “I have seen how music has a calming effect on people and I know that this project has given children self-esteem and confidence which will develop throughout the rest of their lives. We have had some children who have been quite unruly when they first began and it is amazing to watch how they change from being undisciplined into being more focussed, more sensitive to the needs of others and more involved with their community.”

Jan believes that the project has helped to develop community spirit in the area. Parents now chat to one another as they wait for their children or enjoy a concert together, and friendships are made amongst the children. She says, “Here is an opportunity to meet people with whom they would normally not have contact. They have even been introduced to opera, as Welsh National Opera is also supporting the project.”

Earlier in the year, the youngsters performed on BBC One’s Songs of Praise when they accompanied internationally acclaimed tenor, Rhys Meirion. Last year, another BBC Wales radio programme, All Things Considered, won a prestigious national radio award, the Jerusalem Trust Award for the best Easter programme. Its presenter, Roy Jenkins, interviewed Jan about her inspiration and ambition for Making Music Changing Lives. She then explained how the project was part of the ongoing resurrection story of new life and new beginnings.

The Community Foundation in Wales has been a strong supporter of the project and, last year, Jan was awarded the Wales Award for Philanthropy. In her usual unassuming and quiet style, she accepted the award with the proviso that every person involved in the project was acknowledged, including teachers, volunteers and children.

But, of course, funding is always an issue and Jan admits that money is tight. A business plan is being drawn up to include the four to seven-year-old age group, currently not included in the project and, with this further development, it is hoped that funders will want to continue with this vital work in the area.

Jan believes that sharing the Gospel of Jesus Christ is not only about preaching, but also living it out. She explains: “Jesus told us to have life in all its fullness and music achieves that, giving self-confidence and bringing the community closer together with respect for one another. My long-term aim is to take the Sistema message across Wales, developing friendships, partnerships and communities.”