Miracles in the city centre 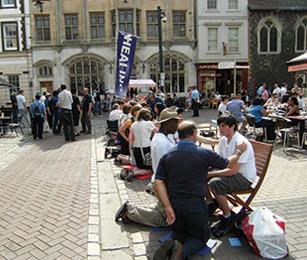 If you walk along Canterbury High Street on a Saturday morning, the chances are your attention will be caught by a huge, five-metre-high blue banner with the word HEALING in white printed on it. As you approach the banner, you’ll notice eight wooden chairs spaced out in a clearing along the edge of a side street. The sound of gentle worship music drifts on the breeze. Several people are standing at the side of the main thoroughfare with small cards in their hands. The word ‘Healing’ is clearly written on the cards.

Some of the chairs have people sitting in them. To either side is a person talking to them or praying for them. Some of the occupants of the seats are openly crying. All of them seem oblivious to the bustle of shoppers passing by. As you walk alongside, you notice a shift in the atmosphere – a sense of peace, stillness. Something is happening. God is at work.

This scene isn’t unique to Canterbury – I just happen to live there. It is being replicated at pretty much the same time in a multitude of towns and cities, not just throughout the UK, but in many countries across the globe. As a result, thousands of people are being healed, becoming Christians and discovering freedom. The churches involved in this work are using a simple model called ‘Healing on the Streets’ (HOTS) that is rapidly becoming as well-known as the popular Alpha Courses.

Healing on the Streets began in the Northern Irish town of Coleraine. Mark Marx, a member of the Causeway Coast Vineyard church in the town, is the man behind the ministry. For years, God had used him powerfully to heal and evangelise people in town and city centres; but he was aware that many Christians found it daunting to engage with non-Christians in public situations. He was eager to find a simple model that allowed them to take God’s love and healing out of the church walls and onto the streets.

The premise is simple: local churches combine forces and HOTS representatives train a team of Christians who commit to having a presence at the same spot every week in the centre of their town or city, offering prayer to passers-by. Everybody who comes for prayer is given details of local churches, Alpha courses and a Why Jesus? booklet. They are told they are always welcome to come back for more prayer or to ask questions about Christianity.

In his book, Stepping into the Impossible: The Story of Healing on the Streets, Mark explains: “We hand out our healing fliers to anyone passing by. This is a personal invitation for them to come and take a seat if they are sick, and if people stop and show interest we engage them in conversation and invite them to accompany us to one of the chairs where we can pray for them.

“Before we begin to pray, we look the person in the eyes and begin to tell them that God loves them with all of his heart. Many times we have seen people healed before we have even prayed, as they receive the truth of God’s love for them. Whether people are healed or not, we want those who come to the chairs for prayer to be left in no doubt at all that God loves them and that here are a group of Christ-passionate people who truly care.”

In May 2009, my friends Simon and Maria Redman oversaw the beginnings of HOTS in Canterbury. Having worked in the police force, Simon was only too aware of the need for God’s presence to impact the city. He wanted to find a way to help the local churches to move out of their buildings and onto the streets. HOTS was a perfect channel to fulfil this desire.

They contacted as many local church leaders as they could, with the aim of setting up a group in the city. “Miracle one – nearly all of the leaders were available to meet with us on the same day,” Simon told me. “They’re all so busy, it’s virtually impossible to get two or three of them together, let alone a whole group.” Many of the churches’ leaders immediately gave their support.

Now all that was needed was a spot in the city centre. A few days later, one of the pastors was sitting in a local café when his attention was drawn to an open space on the pavement opposite. He felt strongly that this should be the site for the Canterbury HOTS. When another colleague researched the history of the site, he discovered a church had once stood on the spot. It was already sanctified, holy ground.

Over the years that Simon and Maria have overseen HOTS in Canterbury, they have witnessed countless miracles. The group has prayed for over 5,000 people and more than 100 people have become Christians. God has given pregnancies to at least four women who were unable to conceive and has also healed hearing loss, cysts, kidneys, backaches, tooth aches, neck problems, damaged limbs and countless other conditions.

Many have found deep inner healing from desperately painful hurts. Others have been reconciled with God, or with family members. Sometimes people are healed instantly, other times they come back regularly and are healed over a period of time. Some are healed a while after they have been prayed for. And sometimes people aren’t obviously healed. But what is clear to all the team is that God always touches people when they come for prayer.

I joined the Canterbury HOTS team not long after it was formed. Our training weekend with Mark Marx and his team was inspirational, but I was still nervous about going onto the streets and praying for people. As we knelt on the pavement to wait on God before we began the HOTS session, I felt an overwhelming sense of God’s peace and his powerful presence. To my amazement, it didn’t take long for passers-by to stop and request prayer. I soon lost my fear as I prayed for a few women and saw God gently touch each one of them.

Since then, I’ve had the privilege of seeing God heal through my prayers in miraculous ways. A woman’s leg, which was a good three centimetres shorter than her other one, was lengthened before our very eyes. Another woman came to us with a frozen shoulder and couldn’t raise her left arm very high. By the time she left us, she could swing her arm freely and hold it right above her head.

One of my favourite encounters happened a few years ago. As I chatted with a friend on the team, a man came up to us, asking, “Are you lot witches?” We began to explain that we were from local churches, when he interrupted us. “I don’t believe in God, but something’s going on here. Last week I was coming down the street here – I had a bad arm and as I walked past you all it got better. Just now, as I came past you again, my headache went.”

Simon and Maria tell me that recently they have more and more people approaching them to ask questions about Christianity. As fewer people in our country have any real understanding of Christian truths – and increasing numbers feel uncomfortable, or unwilling to come to a church service – HOTS is providing a non-threatening place for people to find answers about God right where they are – in the high street.

Above all, I love the fact that HOTS has given me a way of fulfilling the commission that Jesus left us with in Mark 16:15-18 “Go into all the world and preach the Good News to all creation … And these signs will accompany those who believe in my name … they will place their hands on sick people and they will get well.”

+ Ellie Philpott is a freelance writer and communicator. Her latest book, Shipwrecks Happen, is available on Amazon. For more information about Healing on the Streets, including details of how you can get involved, visit www.healingonthestreets.com