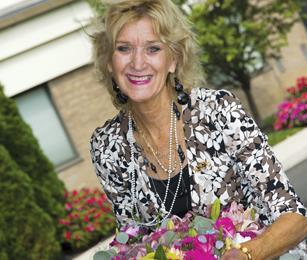 Suzanne Green chats to Patricia Gallagher, who delivers surprise bouquets to those hurting, or lonely in her community

I’m 62 years old – one day I must get a real job,” says Patricia (Trisha) Gallagher. Trisha’s ‘job’ is distributing day-old bouquets that would otherwise be thrown away to the residents of nursing homes near Philadelphia, Pennsylvania, USA. Her “Happy Flower Day” project has touched thousands of people, and provided her with a “whole new joyous world of giving”.
The Happy Flower Day project was born in May 2013 after Trisha attended a fundraising event put on by a non-profit organisation. Flowers had been donated for the event by Trader Joe’s, a speciality supermarket. They asked Trisha’s daughter, who worked for the organisation, if she knew of any hospitals or nursing homes that might want some of the flowers they would be throwing away.

Trisha was already working with elderly people at that time and decided it was worth asking the store if she could have some of the flowers. She was delighted at the thought of distributing bouquets to those who were elderly, lonely or in poor health. She got in touch with Trader Joe’s but when they asked her for the name of her charity, she couldn’t give them an answer. “It didn’t turn out to be a problem,” she said, “because my church was happy to make me part of their outreach ministry!”

It was not difficult to think of people who might need cheering up with flowers. Trisha let her imagination wander. How rewarding it would be to hand out free flowers at nursing homes, senior living communities and hospices. She would love to give bouquets to parents with sick children, those who were isolated in their homes, people experiencing hard times, Meals on Wheels’ recipients, foster parents and cancer support groups – there was no end to her list.

On the first day of her giving project, Trisha collected 60 bright, colourful bouquets. The store had them ready and waiting at 8am, in buckets of water to keep them fresh. Trisha headed off for a nearby nursing home, where she greeted the residents with, “Happy Flower Day!” Within an hour, all 60 bouquets were distributed. She was so excited that she drove back to the store to retrieve another bunch of bouquets that did not fit into her car for the first delivery.

“I’m addicted to the happiness I feel when I give away the bouquets,” she says. “I’ve watched lots of people eagerly grasp the flowers, smelling them, touching them and holding them close to their hearts.”

Since the project’s start, Trisha has handed out more than 6,000 bundles of blooms at more than 65 nursing homes. She works seven days a week, only occasionally taking time off, and gives out an average of 50 bouquets per day. Sometimes she has a set schedule for the day and knows where she will be going with her cheery gifts, but on other mornings she asks God to guide her. “Every day I ask for the knowledge of God’s will and the ability to carry it out,” she says.

Trisha is rewarded with surprised smiles and grateful hearts. One elderly lady said, “I don’t want any. I don’t have any money to pay you. You mean they are free? Who are you, dear? Why are you bringing me flowers? I didn’t think it was going to be a good day and then this happens. You are giving me these beautiful flowers, really?” She looked surprised, her face crinkled and her eyes filled with tears.

Another lady said, “I’ve always wanted someone to give me flowers. You are my sunshine for bringing these to me … when you get flowers it means that someone cares about you.”

Trisha’s own life has not been all ‘hearts and flowers’. In 1999 her husband John attempted suicide, having been depressed about his work situation. During this painful period, Trisha began to write poetry. A line from one of her poems, “I need a team of angels, Lord”, inspired her to set up the Happy Flower Day project’s predecessor, Team of Angels. Through this outreach, Trisha sent gold ‘angel’ pins to thousands of people across the US in need of encouragement. She received some 30,000 letters from recipients, including a woman whose children had died in a fire, a donor transplant patient and a prisoner on death row.

The Flower Lady, also known as Patricia Gallagher, has twice been a guest on the Oprah Winfrey Show, and happily shares her story at nursing homes and with other people, or organisations that want to set up a similar project. She has written a number of books, including What Can God Do with a Woman Like Me? and No More Secrets: A Family Speaks About Depression, Anxiety and Attempted Suicide, which she co-authored with her husband. Learn more about this amazing woman at www.patriciausa.com