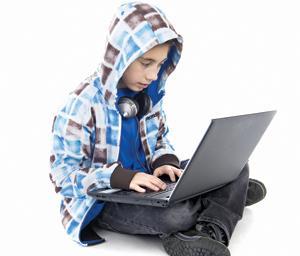 ‘I found pornographic images on my son’s phone’

It’s a scenario most parents will face at some time or other because keeping children safe on the internet is one of today’s biggest parenting challenges. Mandy Pilz hears how one mother handled the situation and talks to those aiming to offer support and advice

Hampshire mother-of-three Morven Brown was caught off-guard while looking at her 11-year-old son’s iPad. “I was being nosey, looking at holiday photos when I found the images – several frontals of a woman’s genitalia. He’d had a sleepover the week before at a friend’s place. That’s when the images had been put on, though I don’t think it was really him who’d initiated it. My initial reaction was to just delete them, but I decided to discuss it with my husband. We later removed the images and put on parental controls.

“When my son came home that afternoon, I told him I’d found the images on his computer and he gave me a blank look. Then suddenly the light went on – he knew exactly what I was referring to. He said, ‘Oh, I haven’t had time to delete them’ but then said, ‘actually I’ve had plenty of time’.

“I’m prone to fly off the handle about these kinds of things, but with this and an earlier Facebook incident I found it better to be measured and calm, and take a step back. I think I reacted that way precisely because I hadn’t encountered this situation before and felt it was that much more serious.”

Morven says keeping one step ahead and educating yourself in this area is invaluable. “We weren’t prepared. If you want to stop it before it happens, you need to be a lot more on the ball than we were.”

So, knowing the challenge the internet poses, what steps can parents take to prepare themselves to prevent and deal with similar incidents?

Keeping the lines of communication open and being frank about issues is crucial. Miranda Suit of Safermedia  says, “The most important thing for parents to do is to talk naturally with their children, in age-appropriate ways, about healthy sex and relationships.”

And this is echoed by Katharine Hill, director of family policy at Care for the Family (CFF). “Having these conversations in the normal course of family living is better than the ‘big conversation’,” she advises. “These can happen over meal times, in the car, wherever we are, just talking about the importance of building good relationships, while explaining that images on a screen aren’t real relationships.

“It’s also about equipping children to think ahead about different scenarios. Asking, ‘What would you do if such and such a situation arose?’ It’s so hard for them if everyone else is doing it. It takes a lot of guts to be different, but it helps if they have a like-minded person as a friend and they both say ‘we’re not going to do that’. Also, we need to make it easy for them to tell us so that if they do look at inappropriate material we can respond with, ‘OK, it’s not great but it’s not the end of the world and how can we avoid that next time?’”

Cherith Hateley, who runs the internet site www.candp-s.com/familysafety says talking with her children has been key to tackling this issue. “I’ve had conversations with all my children about the effects of watching hard-core pornography and how the internet works, and I’m relieved they understand how damaging it can be and how you’re affected by the things you see.”

Most of us are aware there are various blocks and filters available for use on media gadgets, including mobile phones, which prevent access to inappropriate material. But is this enough? Peter Kerridge, CEO of Premier Christian Media comments, “Younger generations tend to be much more tech-savvy than their parents and therefore able to circumvent whatever filters/safeguards are put in place to protect them from accessing harmful material on line.”

For this reason, Katharine Hill believes it’s important that children understand why the filters are in place. “At CFF we want to equip children to make good choices themselves in a world of unlimited choices. It’s more about connecting with their heart and giving them values, than it is about limiting options. So, filters are important, but we want them to understand why and make those choices themselves.”

Learning about online threats and the effects of pornography equips parents to warn children of the dangers. Dr William Struthers, American neuroscientist and academic, has written on how pornography affects the brain in his book Wired for Intimacy – How Pornography Hijacks the Male Brain, and recently conducted a seminar at the House of Commons entitled What’s the harm? where, according to a Daily Mail report, he said early exposure could lead to children becoming withdrawn and acting out what they have seen on screen.

Setting rules for internet use is also empowering. These could be, for example, agreeing to keep equipment in a shared room, and signing and displaying an internet agreement, which can be found on the ‘action’ page of www.candp-s.com/familysafety. “It’s hard because parents want to trust their children, but there clearly has to be room for parental authority, and the right to say ‘no’,” advises Katharine. “Parents certainly don’t have to give their child a phone just because everyone else has one. Each family has to come up with their own guidelines and decide at what age it’s appropriate for their child to have a phone.”

Work with other parents

The one group of people who can probably help parents most is other parents. “I don’t think my son is really interested in porn,” says Morven, “but it’s the group mentality, the peer pressure that drives it.” Therefore, parents agreeing to work together, towards the shared goal of protecting their children reduces the potential for secrecy. “Among my friends we’ve been quite open,” she continues. “On Facebook we click on each other’s children to see what they’ve been up to. But this depends on how co-operative parents are. We’re fortunate in that we’re friends with quite a few of my son’s friends’ parents. But if you aren’t you have no control.”

Get the school involved

Working with schools and other bodies also helps. Schools take a special interest in this and some put on evenings which address this topic, helping parents to ensure their child is safe. The UK Safer Internet Centre provide online packs for both primary and secondary schools for use in class consisting of five, quick classroom activities and a fully-supported lesson plan.

Sadly, this is an issue that is not going to go away. Cherith Hateley warns: “Allowing the internet into your children’s home is a big responsibility. It’s not a passive medium, it’s interactive, it’s quite scary and there’s some truly horrific stuff out there.” Katharine Hill agrees, but adds, “At the end of the day it’s about firm boundaries, loving our children and enabling them to make choices themselves. But it is hard.”