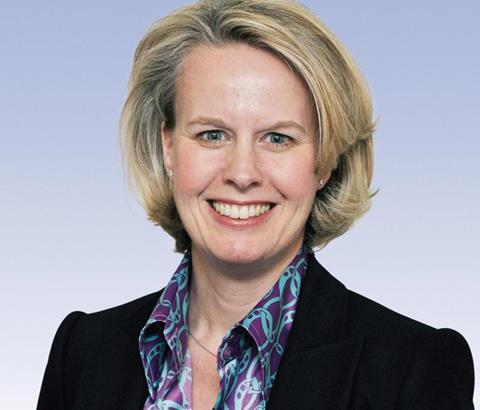 ‘I was given a fantastic opportunity’

Kay Chaldecott is the managing director of Capital Shopping, a major UK FTSE 100 company. Her portfolio includes Lakeside and the Metro Centre in Gateshead. Kay is a committed Christian and was the first woman to run a major UK property company. In 2007 she was voted the eighth most influential woman in property. She talks to Ali Herbert about her career, family and the importance of encouraging others

I was brought up in south-west London and I still probably live only about half a mile away from that now. Most of my peer groups moved away from London, but I was fortunate enough to stay. I couldn’t do my job unless I lived fairly locally.

My childhood was happy and I never really had any crises. I didn’t go off the rails as a teenager or cause my parents too many problems! I really didn’t have a clue what I wanted to do though. I didn’t have any great longing to be a doctor or nurse, or any of the other options that seemed open to women at the time.

My father worked as a company secretary for a firm of surveyors in St James’ in London and they let me go in for a couple of weeks in the school holidays to follow the surveyors around. I liked the idea of that kind of work because it meant you weren’t tied to a desk the whole time. South Bank Polytechnic offered me a place to do Estate Management so I went to college. There were only four women out of about 94 students. In my third year I did a placement at Capital before finishing my studies, and that was the start of my journey. I’ve now been with Capital for 26 years.

It was quite unusual at the time for a woman to go into property and I found it very hard to find a job. So I worked for a while as a telephonist and receptionist. Then, because I’d kept in contact with a few people from my placement year, a couple of months later I got a phone call saying they had a vacancy for a graduate rent review surveyor – would I be interested? I’d only been there for six months, when someone who had been working as a property manager for one of our shopping centres was promoted elsewhere.

The management looked around for someone else and said, “Kay, rather than just holding the other end of the tape measure, could you just sit in this place and see whether you can do it?” It was a massive opportunity and I just loved it.

I wouldn’t say that I’m an ambitious person, but I think I was in the right place at the right time. I am very focused and if someone asks me to do something I try and do it to the best of my ability. One of my superiors used to say to me that I had a sense of urgency. So I would get things done in a very timely manner because, at the end of the day, you’re measured by your results. In my line of business you need to do a good job, but you need to do it quickly and to be fairly decisive so you can keep things moving forward.

I’m responsible for the whole of the shopping centre business from an operational point of view. So that includes property, development, construction, commercial activity and operational activities. I’ve got a fantastic team and I try to delegate as much as I can to ensure that they have job satisfaction too. The key is knowing when to push and pull the levers and making sure that strategy is put in place and actually implemented.

One of the best pieces of advice I got years ago was: surround yourself with people who are better than yourself. So I make sure that in each aspect of the business I have someone who is an absolute expert in that. That is how you build a good team. It’s about trust – people’s skills are taken for granted. I want the staff to know that we do recognise their input and that they will be treated well.

My personality and my skills and traits are probably the complete opposite of what you’d expect a leader to be. I don’t have lots of degrees, masters or an international education, and I’m not ‘hard as nails’. I can be extremely emotional and I do care a lot about the property and the staff. But somehow or other God has just used my real personality. Becoming an executive director wasn’t through my ambition, but for some reason God seems to want me here.

There’s nothing that you can’t do if you really want it badly enough – and it’s in line with God’s plan A for you. If you really are interested in something and you want to do it, then just go for it! It can be a bit tricky working out what God’s plan is for you, but you’ve just got to keep trying the doors.

I could not possibly do my job unless there was flexibility in my husband’s job. At different points in your life you have different pressure points and I’m a firm believer that you can’t have it all. John, my husband, was a deputy head in a secondary school and when the children were young we were fortunate that we had a child minder who lived right next door to the school where John worked. Whilst I may have packed up the bags and got the food and the nappies together, John was the one who took Jack and Harry to the childminder before he went to school and, nine times out of ten, he picked them up as well.

My boys are now 18 and 14 and, over the years, I’ve had quite a few discussions with them about whether they feel they’ve missed out. Their reaction has always been, "no, we didn’t miss out because we didn’t know any different!" My younger son is dyslexic and the great thing has been that John can spend the time supporting him in a way I couldn’t because I simply don’t have the teaching skills. So there is a balance and for us it has worked out. It doesn’t necessarily make those feelings of guilt go away, but it puts them into perspective.

In my job you have to stay focused and you have to stay calm and keep going. During this recession, we lost 12% of our rent roll because a lot of retailers went into administration. We’ve now got our occupancy back up to 98%, which is great because lots of lights turned off in shops can make shopping centres feel very cold and dead. While some retailers have failed because of the banking crisis, a lot of them have now stabilised and are back on track. There are new retailers coming in from the US thinking the UK is good value at the moment – which is great news for us because it is revitalising our centres as well.

There’s still a great deal of satisfaction for me in doing a deal – especially a complex and difficult one. I’m learning now to have just as much satisfaction from seeing someone else doing that too. I’m very interested in bringing people on and seeing if I can mentor or share my experiences with younger people to try and help them – especially in the economic environment at the moment.

I’ve had the privilege of working with two people who were previously in the job I’m in now and who were men who both challenged me and threw me in at the deep end. They had confidence in me and their influence on my professional life has been immense.

I like to try and give people confidence. Quite frankly I had very little confidence when I was young and I still have low levels of confidence and a high failure-avoidance! Looking into the way we can grow the next generation of leaders – both in church and in the secular world – is something I find very powerful. It’s amazing what people can do when they hear positive things.