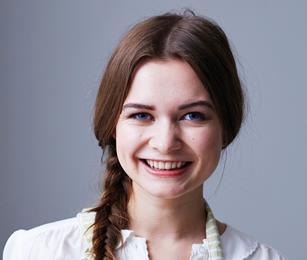 Next year is shaping up to be very exciting

Martha Collison talks to Catherine Larner about life after The Great British Bake Off, looking forward to Christmas and her hopes for the year ahead

It’s a perfect summer’s afternoon. The sun is shining, the birds are singing and there is a buzz of excitement as the gathered crowd makes its way from the grand country house and across the beautiful manicured lawn. People of all ages, from early teens to retired couples, take their seats at tables laden with tiers of meringues, towers of rhubarb and ginger cake, and piles of sticky toffee flapjack.

The ‘tent’ has been replaced by a ballroom, the ‘gingham altar’ by crisp white tablecloths and instead of ‘Paul and Mary’ passing judgement on the baking, it will be the audience, customers of a local bookshop, who will decide what they think of the recipes created by Bake Off contestant, Martha Collison.

The quarter-finalist of the 2014 series and the youngest contestant (at 17 when she took part), Martha was visiting this location in the Suffolk countryside as part of a hectic schedule of festival appearances, baking demonstrations and book signings spanning three months, all publicising the release of Twist, her first cookbook.

“I have always wanted to write a cookbook, but would never have dreamt it was something I could do,” she says. “But I had this idea for putting a new twist on favourite recipes and it was quite amazing when HarperCollins said they would like to publish it. Since then it’s been a lot of fun, a lot of hard work, a lot of late nights staying up baking and writing, but now I’ve got the finished book in my hands, I just can’t believe it. I keep looking at it!”

Martha has drawn a crowd wherever she has made public appearances, and there has been considerable media attention with her recipes regularly featuring in national magazines and newspapers. All this has been in addition to her regular weekly column for Waitrose supermarket and the many other opportunities which have arisen since the series was aired and Martha wowed TV viewers with her poise, determination and maturity.

“I think all of us found it quite strange,” she says of the Bake Off experience. “We were just normal people with ordinary lives and we got thrown in at the deep end.”

Life has changed considerably since the series was aired, of course, and this has changed Martha’s experience of watching the programme with new contestants.

“The first series was quite difficult to watch because it was still quite raw,” she says. “It felt like they were intruding on our space a bit! This year’s series has been much more enjoyable as we have all become more settled in what we do now, for me writing recipes and working with charities.”

Martha had applied to be on the programme the day before the deadline for entries. “I had grown up loving the show so when I saw an advert, I thought I would give it a go,” she says. “I was supposed to be revising for my AS mocks but decided it was a much better use of my time to spend all day filling out this application form instead! Fortunately it worked out nicely.”

She was invited to auditions in London, had to meet with a psychotherapist and underwent various background tests. Arguably, Martha with her ever-present smile and twinkling eyes, seemed the most grounded of all the contestants. Gently spoken and articulate, she also displayed wisdom beyond her years as she anticipated the potential hazards and massive responsibility of a television profile from the outset.

“They interviewed us after every bake, every judging,” she says of the film crew. “There were a lot of one-on-one interviews, but they knew the answers they wanted you to give. It took me a couple of weeks to get into the mindset where you can’t blame other people for what you’ve said.”

Taking care of how she spoke about her motivation and the competition with the other Bake Off contestants, Martha also realised that she could use her profile on the programme for good.

“I knew that it’s such a massive show in the UK and that I would get quite a lot of recognition,” she says. “I wanted to have a fresh outlook saying young women don’t have to be completely focused on make-up and how we look; we can be more lighthearted and care more about personality. People come up to me and say, ‘my 10-year-old loves you’. It makes me want to be a good role model for all my young fans.”

As a committed Christian, Martha also wanted to be open about her faith and highlight causes that mattered to her.
“I go to a New Frontiers church, Ascot Life Church. My dad is an elder. I’ve always grown up going along to church, but my parents didn’t christen us. They wanted me and my sister to make the decision for ourselves. But we experienced God in such a powerful way at different youth events that we have both made that decision to be baptised and put God at the centre of our lives.

“It has helped so much in the process of Bake Off because it gives me something that is constant. So when I am in a tent in the middle of nowhere with no one I know, or when I’m home baking at one in the morning, I can be sure God is there for me and my identity is always in him.”

Nevertheless the show also challenged Martha and her parents in their daily lives.

“We were not allowed to tell people about the programme,” explains Martha, and as the weeks went by, it was more and more difficult to explain away Martha’s absence. “Very often, filming was over a weekend and people at church wondered why I wasn’t there with my family. And at school, the teachers, who knew about the programme, let me off homework and the rest of the class couldn’t understand why. Lying is not something we would generally do and my family got round it by saying I was going on a food weekend.”

Family and friends all knew Martha was a keen baker. They can trace it back to her making rock cakes when she was eight, asking for an ice cream maker for Christmas not long after and writing her own food blog when she was 15. Her school, recognising her passion, ensured she could make the most of the Bake Off opportunity by keeping the route back to her studies open for later.

“I certainly hadn’t taken into account how preoccupied I would be with the show,” says Martha. “You can’t really switch off. It’s so exciting and you know that as soon as it airs it will completely change your life, so the idea of sitting down to do some maths was certainly a challenge.”

Completing her A levels this year (taking three years rather than two, to accommodate the Bake Off experience), she is pausing before exploring a route to university or cookery school, and is using her profile to work with charities, the supermarket Waitrose and in giving public appearances.

Martha is a keen supporter of the Christian relief and development charity, Tearfund, so was keen to get involved with their work.

“Human trafficking has always been something that I’ve felt is a massive injustice,” she says. “I was at the Big Church Day Out volunteering with my friend and I was praying that I would find a way of incorporating baking with that cause.”

Here she learned of Tearfund’s Big Bake fundraising initiative and also its No Child Taken campaign to protect vulnerable children from trafficking. Becoming an ambassador for both, Martha visited Cambodia to see conditions for herself.

“It was harrowing. Many of the girls were 14–15 – the same age as my sister, Hannah – and a lot of their families had already been trafficked. By teaching them how to bake something to sell, I was giving them the means of generating an income so that they wouldn’t be similarly ensnared.”

As the year draws to a close, what will happen next for Martha?

“I’ll be spending Christmas like I do every year – with my family! It’s really special to have that day relaxing together. We all go to church together in the morning which means a lot to me, and then we cook lunch. It’s a team effort, but I’m in charge of dessert!

“My family always host a big Christmas Eve party, too,” she says. “It has become a bit of a tradition. I love making lots of canapés and party food, and it’s a lot of fun to spend one of the most exciting evenings of the year with all my favourite people.”

Martha will take time to take a breather before the New Year and new opportunities, but is full of anticipation of all that lies in store.

“Next year is shaping up to be very exciting!” she says. “I’ve joined the team of a brilliant new charity called Bramber Bakehouse, which works with women who have been victims of trafficking in the UK and teaches them techniques in baking, as well as other life skills.

“We are currently running monthly workshops, but hope eventually to have our own kitchen where we can run full-time 12-month internships for the women.

“The Cakes, Bakes and Faith tour with Will Torrent is continuing. We talk about faith and the food industry and being a Christian in the media, and there are more dates in major cities being discussed for next year. I’m also working on another recipe book, but can’t say much about that at the moment!

“I’m really going to try and run with things. I’ve always wanted to work in the food industry and I thought that my route in would be food science, but now it seems to have happened really quickly through the Bake Off, so I’ll see how far I can go. I’ve been very lucky with what I’ve been able to do so far, so I’ll keep praying and roll with what comes.”

+ Catherine Larner is a freelance journalist, based in Suffolk