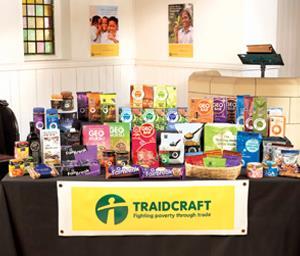 Could you be a Fair trader?

It’s not all been plain sailing, but Annie Porthouse is still an enthusiastic supporter of fair trade. She shares her experiences and offers advice to anyone interested in taking up the challenge

We all do it, each and every day. Whether it’s buying a coffee at work, enduring the weekly supermarket shop or splashing out in Harrods ... shopping is a fact of life. But back in 2006, at the forefront of my mind was not: “How many more pairs of heels and/or handbags can I purchase without my husband noticing?” but rather the ethical implications involved with buying ‘stuff’ of any sort. (I appreciate that this now reveals my secret identity as a Guardian-reading, avocado-munching, middle-class leftie. Never mind – it was never a particularly well-kept secret anyway.) I was coming to realise that considering the impact of my shopping choices on others around the world was as integral to my Christian faith as attending church on a Sunday morning, giving to charity and sharing my faith with others.

In my view, while most people seemed to have heard of Fair Trade (FT) and deemed it to be a worthwhile endeavour, few of them ever bought FT goods. The general consensus was that it was all about bananas and coffee (and for the non-dieters: chocolate). The assumption was that if an item was FT, it would be more expensive than its regular counterpart (which back then, was quite accurate). And then there was the problem of finding FT goods. The Co-op sold FT bananas and perhaps coffee, but that was where it ended. If you didn’t frequent Co-op, you were doomed from the outset.

Fortunately for me, there was one like-minded soul in my church. Together we signed up as ‘Fair Traders’ with Traidcraft and opted to run a monthly FT stall in the town hall. (Traidcraft’s network of Fair Traders numbers more than 5,000, and 65% of Fair Traders run their stall in a church, while the rest operate in schools, workplaces, colleges, universities, farmers’ markets and online.)

So for one Saturday each month, while the sensible majority were still surgically attached to their duvets, we lugged heavy boxes into the town hall, arranged the goods in an inviting manner, and manned the stall until lunchtime. We doled out stickers to children, and samples (generally of a chocolate nature) to anyone who, intentionally or otherwise, came within a 15-metre radius of our stall. We sold many FT food items (and some gift/craft items), had many conversations with people about FT (and why, as Christians, we were keen to promote it) and enjoyed ‘playing shop’.

Did we manage to spread the word about FT? Yes. Did we support the admirable work of Traidcraft by selling their wares? Absolutely. Did we break even?

Er ... no. Which, in some ways, was acceptable. We hadn’t assumed that running an FT stall would result in paying off our mortgages; it was a non-profit venture after all. The problem was that we had to pay £11 each time for the privilege of holding the stall there. It was a good location, as people were already coming into the hall to view other stalls. However, as the Traidcraft prescribed prices grant their Fair Traders a 10% margin, this meant that we’d have to sell goods to the value of at least £110, each time, for the profit to pay for the stall rent. Sadly, this rarely happened. Thus, after a couple of years, we abandoned our forays into the town hall.

Our subsequent plan was to run a similar stall in our own church – a Baptist Church with a Sunday morning congregation of about 80. Our first obstacle was an unexpected one: some of the congregation were opposed to Sunday trading. Eventually, the issue found its way to the church business meetings, which finally granted permission.

We held the church stall monthly, directly following the morning service. We made flyers, gave talks, made announcements, and again distributed stickers and samples like they were going out of fashion. Was it a big hit? Certainly ... at first. People enjoyed perusing the stall and chatting about the issues involved or their favourite type of chocolate bar, or both. We tried to ensure that the food items we were selling were ‘everyday’ ones, rather than exotic. Not that we don’t do a bit of ‘exotic’ here in Somerset, but it was conventional items that sold fastest: rice, pasta, jam, coffee, tea, sugar, hot chocolate, cereal bars, chocolate bars, etc. (Yes, I am aware that I’ve just inferred that a chocolate bar is a ‘conventional’ item, but as this magazine is read prominently by women, I doubt a retraction will be necessary.)

So while interest and enthusiasm remained high (ours and our church friends’), once the novelty had worn off, the takings floated between not bad and very low. It wasn’t exclusively about the stall though. Our position as Fair Traders enabled us to sell tea, coffee, sugar and snacks to our own church, another local church and a local youth event. We got invited to speak (and/or run our stall) at other churches and community groups. We even had a request from a local Women’s Institute group. This scared us somewhat as we envisioned being forced to strip off and pose alongside a piano, ending up as ‘Fair Trade February’. Fortunately (for everyone) we were permitted to remain fully clothed, and our talk was well received.

But our stall really came into its own at Christmas, when customers who were otherwise hesitant and unreliable switched into eager and faithful mode. Not only was the monthly stall hugely successful around this time, but so were our FT Christmas parties. Akin to ‘Body Shop at Home’ parties, but without the free makeover. Who needs a makeover, when you can play ‘Guess which mince pies are the FT ones’ and ‘Guess which Christmas pudding is the FT one’ (you get the idea – suffice to say it always involved eating!). We were inundated with buyers. It also proved an effective time of the year to distribute catalogues to, and take orders from, work colleagues who had expressed an interest.

We no longer run the stall at church now because support dwindled, rendering us almost obsolete. Why? Well, perhaps because supermarkets are now stocking more FT products than ever before, often at reasonable prices. I asked Jane Riley, business development manager at Traidcraft, for her response: “Supermarkets can only work with producers who already have the Fairtrade mark on their products and are able to deal in the huge volumes that the supermarkets require. Supermarkets offer no opportunity to producers who aren’t yet at that level but would like to be – which is where Traidcraft comes in. We work to develop these producer groups, to help them improve their products, refine their techniques, increase their capacity or range of commodities and to develop their small businesses. Your money goes a lot further when you buy fair trade from Traidcraft.”

For us, the ending of our monthly stall in no way equated to the end of our involvement with the promotion of FT. I run an after-school fair trade club at the primary school where I work, which has been a big hit. We are still fair traders and will continue to run FT Christmas stalls/parties, and to give talks when invited. My advice to anyone interested in running a stall would be to consider carefully where it’s most effective for you to hold the stall, who you will be selling to, and therefore what you will need to stock. Start small. Enjoy yourself. Make ‘raising awareness’ your primary focus, so you won’t be disappointed if the takings are low and you’ll whoop with joy if they are high! And for the more adventurous amongst you ... perhaps consider posing for ‘Fair Trade February’; guaranteed to get a reaction of one sort or another.

Get everyone involved – get your church youth group, or school council, to assist with the stall.

Mix it up – select your goods from the best of Traidcraft, Tearfund and other suppliers to get the goods best suited to your particular clientèle.

Keep it fun – give out balloons, stickers and samples.

Get good advice – Visit www.traidcraft.co.uk and follow the Get Involved link.