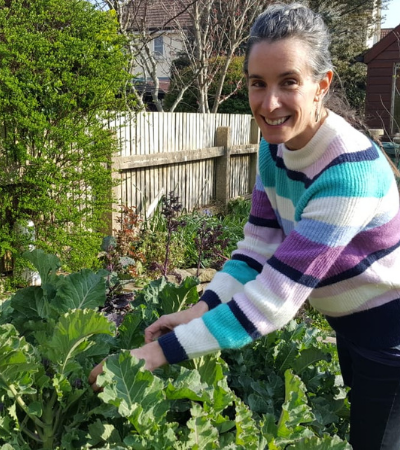 It was a book that changed everything for Ruth Valerio, back in her student days at Cambridge University. “I read Whose Earth, which had been commissioned in 1992 by both Tearfund and the Evangelical Alliance (EA) as a response to the Rio Earth Summit. There was a ‘Whose Earth’ rally in Trafalgar Square, which I went to, and it was like a second conversion, an ‘ecological epiphany’. The book opened my eyes to the biblical case for caring for the whole of God’s creation.”

Before this experience, Ruth had little inkling of what she should do with her life. “When I was in fifth form, I went to see the careers advisor, and from the test, she said the only career that would suit me, was to be a careers advisor!’

As a student at Cambridge University Ruth felt directed to read theology, after initially applying to study history. “I remember that as a God moment, guiding me on the new direction my life was to take because I had no idea how much of a passion theology would become.” Ruth has gone on to gain three PhDs in theology.

While Ruth was at Cambridge, she also developed a passion for people in poverty, as well as the environment. “Looking back, I can see how formative those years at Cambridge were. Through study, God rooted me in a love for his world and a passion to see his justice in situations where it is utterly lacking.”

On graduation, Ruth worked as a research assistant for Clive Calver, director-general of the EA (Evangelical Alliance).

“Clive was doing a series for the BBC World Service on ethical issues, and one topic was the arms trade. I knew nothing about it, but it was my job to research into it.”

At the same time Ruth and her then husband travelled to the slums of Addis Ababa to visit a charity they were involved with.

“I was in the slums, with the poorest of the poor, reading up on the arms trade. I suddenly saw how complicit we all are; my eyes were opened to each person’s impact on these issues.”

The deeper understanding of global issues, led to Ruth writing about small but significant steps a person could take to live more responsibly. “I had a regular magazine column called ‘The Alphabet Lifestyle’. I happened to be speaking at a conference, and I was telling a fellow speaker about it. He said it would make a great book.”

It did make a great book, and L is for Lifestyle was published first in 2004 (rewritten and republished in 2019 by IVP). It was groundbreaking at the time as there were not many books on creation care.

Towards the end of 1999, just before Ruth had her two daughters (Mali, now 21, and Jemba, now 17), she was at a conference she had organised for the EA. It was there, during a seminar, that she felt Jesus tell her it was time to leave the EA, where she was by then head of social responsibility.

“It could have seemed a terrible idea, but God was in it, and he kept us. At one point, we were almost out of money. I prayed in the morning, telling God our need, and asking for a way to bring some money in. That afternoon I got a phone call from the then CEO of Tearfund, asking me to write two papers on poverty and globalisation.

“That was God’s provision. It brought the money in and opened up a new sphere for me. I began contributing to books and speaking on the subject. I learnt that God brings the right thing at the right moment. It is like walking into the dark with a candle – you can just see one step ahead, but that is enough.”

Living out the principles

As Ruth began to learn and read and write on the subject, she started looking at her own life. What could she do?

“I have lived on a council estate in the south of England for over 25 years. We moved deliberately to be good news to the area. I was talking about global issues of justice and poverty, but I knew I wanted to live it out in a local expression.”

Back then, the estate had a huge problem with violence and drug use. Pizza delivery men were only allowed to go in twos, for their own safety.

“The estate is built around a green, it is the heart of the community, so we started on that first, putting in lights so it was safe. We added a children’s playground and made the gardens pretty.

“I began a community association and co-chaired it for twelve years; we even won a ‘Britain in Bloom’ award for our work on the green."

Food has been a major part of Ruth’s journey as well.

“We got chickens, started an allotment with friends, and even kept pigs for ten years. We only stopped as we were becoming more and more vegetarian in our eating habits.”

In 2013, while Ruth was working for an environmental charity, A Rocha, she developed an Eco Church project – a scheme to engage with caring for the wider natural world. They now have over 3,500 churches involved.

Now working for Tearfund, Ruth is focused on trying to get churches engaged in the issues being raised at the UN Climate change talks in Glasgow at the end of the year. “My aim is to get the Church of Christ engaged in environmental care. To do that, I am hoping to start up peer-mentoring, so those that have experience can lead the next generation.”

During lockdown, Ruth had an idea for a children’s book about protecting our world. She contacted her friend, comedian Paul Kerensa, and together they wrote Planet Protectors – 52 ways to look after God’s world (SPCK).

When Tearfund had its 20-year anniversary tour of Whose World, the book that changed the course of Ruth’s life, she was asked to speak on it. That was in 2012.

“It was both a privilege and a sense of coming full circle. The book opened my eyes, and I have spent the last 30 years trying to open other’s eyes to our biblical mandate to care for this beautiful world we have been given.”

If you would like to find out more about the issues touched upon in this article, and what you may be able to do personally, here are some useful resources:

Prayer for the climate - Tearfund

Green living - Ruth’s own website provides ideas for what individuals and families can do, for example:

1. Finding ways to clean the house in chemical-free way.
2. Plastic-free hair care.
3. Saving energy around the home.
4. Where to go for beauty products with a conscience.

Books by Ruth Valerio on the environment and sustainable living: