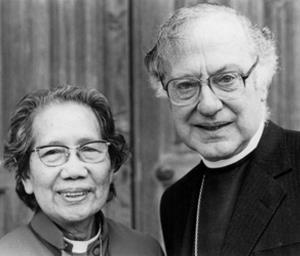 What could you do?

Most of us don’t expect to make a big impact on the world, but who knows where God might lead us if we follow his call? Christina Rees takes inspiration from three ordinary women who took a step of faith

In these days of active mission planning, fresh expressions of ministry and pioneering church projects, it’s sometimes easy to lose sight of the value of what one person can do. Good teamwork and effective leadership are, of course, vital for the success of most endeavours, but in the understandable desire for creating and maintaining proper structures and systems, it is possible to underestimate the decisive role that just one person, and perhaps especially, one woman, can play.

I’m not referring to the effect that high profile leaders can have, charismatic extroverts destined for celebrity status. Rather, I’m thinking about ordinary people who, at a crunch time, are willing to step outside their comfort zone and do something extraordinary because they believe God is calling them to do it. These are typically people who have been living their lives with a simple integrity, going about their business with thoughtfulness and care, never looking for the limelight, but who, when the critical moment comes, are prepared to respond to the challenge with courage and faithfulness.

Just a pretty young thing?
Consider the position of Esther, whose story is told in the Old Testament. Esther was a young, orphaned Jewish girl, living with her guardian among her people as ethnic minorities under the rule of a powerful Persian king.

When Esther was randomly selected as one of the young women who would be groomed for a year, with the possibility that she might be chosen by the king to become his new wife, her guardian, Mordecai, told her to go along with the process, but not to tell anyone that she was Jewish. At the end of the year, Esther was chosen as the new queen and her life was transformed.

She could have easily put her past behind her and allowed herself to become entirely caught up in her new pampered and privileged status. Instead, when her people faced almost certain annihilation at the hands of a hateful court official, Esther acted with wisdom, cleverness and courage, and engineered a safe future for them.

On more than one occasion, she flouted convention and risked her own life in order to achieve her aims. In doing so, she saved her people and changed the course of history.

Just a deluded peasant girl?
Take the case of Jeanne, a young, illiterate French girl whose life revolved around helping her parents on their little farm. Jeanne kept on having strange dreams and hearing voices telling her how she could save the king from forces opposed to him.

On the strength of the voices, which she believed came from God, she managed to speak with the king’s officers and convince them to let her join the French army. She even helped to plan strategic military manoeuvres and fought alongside soldiers in battle, dressed in her own customised armour. Her leadership and courage saved the king and safeguarded France as a nation.

Sadly, however, Jeanne’s extraordinary military skills and morale boosting effect on the troops, with her compassion and devoutness, caused a senior official to become bitterly jealous and resentful of her. Lies and rumours began to circulate and Jeanne was arrested, imprisoned and tortured. Eventually, she was tried for witchcraft and heresy, fraudulently found guilty and burned at the stake.

Jeanne could have ignored her dreams and given up many times, but she persevered, certain that God was leading her. She could have also saved herself from repeated torture and an agonising death by recanting her dreams and voices, but she remained true to God and the task she had been called to do. Many years after her death, she was finally declared innocent and canonised in 1920. She became the second patron saint of France, known as Joan of Arc.

Just a poor Chinese girl?
On 5th May 1907 a baby girl was born in a fishing village on Hong Kong island. Her parents were Christian, and so did not smother her at birth, the fate that befell many baby girls. In fact, her parents were delighted to have a daughter and named her Tim-Oi, meaning Much Beloved.

Tim-Oi was one of eight children and money was so short that she didn’t complete her schooling until she was 27. While a student, Tim-Oi was baptised, and chose the Christian name Florence. In time, Tim-Oi felt that God was calling her to work for the Church, and a few years later she enrolled in a theological college. After her course, she was made deacon and soon appointed to serve in the Portuguese colony of Macau.

By this time, World War II had broken out, and there was a severe shortage of priests in the territory. The then Bishop of Hong Kong, an Englishman named R O Hall, believed that God had already given Tim-Oi the gift of priesthood. On 25th January 1944, he invited her to visit him, and after much prayer and discussion, he ordained her as a priest, the first woman ever to be ordained in the Anglican Church.

Despite intense prejudice and discrimination, and living for 30 years in Maoist China under the Red Guards, who forced her to cut up her vestments with scissors, Tim-Oi remained faithful, humble and loving. She eventually moved to Canada to join some of her family who had emigrated there, and on a visit to England in 1984, when the 40th anniversary of her priesting was celebrated in Westminster Abbey, she met the then Archbishop, Robert Runcie. He had been uncertain about women’s ordination, but after meeting Tim-Oi, he said, “Who am I to say whom God can or cannot call?”

At many points in her life, Tim-Oi could have turned her back on her faith and calling, but she responded to each challenge with calmness, dignity and a quiet, personal strength founded on her deep faith and love of God. She could have refused Bishop Hall’s offer to ordain her, but she knew her call and the desperate need for priests in war-torn Hong Kong. She was willing to follow God’s leading, even when there was no human precedent.

It takes one woman …
Esther, Joan and Tim-Oi: three women who made a difference in their lifetime and who carry on making a difference. Thanks to Esther, her people were saved and to this day the Jews celebrate that event with the festival of Purim. Thanks to Joan, a king was crowned and a nation saved. Since her death, many thousands, if not millions, of people have found the strength to remain faithful to God in the most challenging circumstances, inspired by Joan’s costly courage.

Thanks to Florence Li Tim-Oi, many hundreds of suffering people encountered the love and compassion of Jesus Christ. After her death, Tim-Oi’s sister created a charity in her memory to empower women in the developing world by training them for Christian work in their own countries. To date, over 300 women have received grants, enabling them to work as teachers, community workers, evangelists, priests and in many other capacities.

You have probably heard of Queen Esther and Saint Joan, but you are unlikely to have heard of Florence Li Tim-Oi. There are many other women whose stories I could have told, but I have included her because of her quiet strength and unswerving devotion to her Lord. I also have had the privilege of serving as a trustee for the Foundation and of meeting some of the women who have been trained. They are now making a difference with their lives, challenging harmful and damaging cultural norms and transforming their communities with the message of the Gospel of Jesus Christ.

What about you and me??

None of us really knows where our influence on the lives of others will end. We can never fully see the effects and consequences of our actions and decisions. What we can do is to live as if every decision matters and every action counts, knowing that each of us has a unique identity and a unique call. Our task is to learn how to live out our calling faithfully and joyfully, always trusting in the One who calls.

*Christina Rees is a writer and broadcaster, consultant and coach, and member of the General Synod of the Church of England. Her books include The Divine Embrace and Feast + Fast – Food for Lent and Easter. For further information about the Li Tim-Oi Foundation visit www.litim-oi.org or www.ittakesonewoman.org