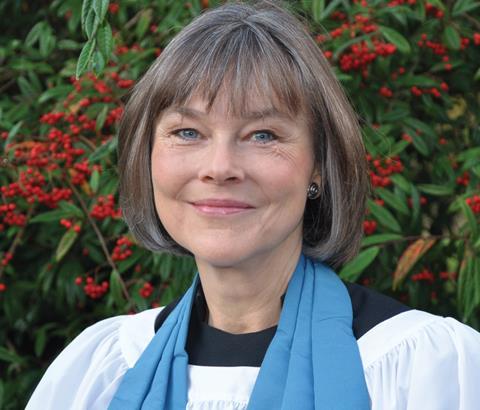 Broadcaster, journalist and chaplain Debbie Thrower talks to Ali Herbert about growing up in Kenya, working in broadcasting and her current work to promote the spiritual welfare of older people

Anchorwoman for ITV’s Meridian Tonight news programme from 1993-2009, Debbie Thrower has presented many programmes including Songs of Praise, Radio 2’s afternoon show and Channel Four’s Collector’s Lot. In 2006 she became a Church of England Lay Reader and has since become a chaplain for the Simeon Trust, which aims to improve the spiritual welfare of the UK’s older generation. She lives in Winchester with her family and continues to combine the chaplaincy with some radio broadcasting.

I was born in Nairobi in Kenya. When my grandparents were first married they went out there to farm in the Highlands of Kenya and my mother was born there. We lived in Africa till I was about five, when we came back to England and settled in Devon. I spent most of my childhood and schooling years there.

I expect it is coloured by photographs but I have a memory of my grandmother who used to farm in Kenya and who had fields and fields of sweet peas. In my memory its ever-sunny days and fields that we used to play barefoot hide and seek in. Learning to swim in Sierra Leone at the age of about three or four is probably one of my earliest memories!

My parents were churchgoers and I was sent to a Methodist school. I went to Edgehilll College in North Devon and very much enjoyed it. I think the seeds of a more committed faith were sown at that school.

I was one of those little girls who used to go round to the neighbours’ houses, knock on their doors and see if they had anything interesting to tell me! As a very young child I was writing little stories and articles, putting together a little newspaper, stencilling it and taking it round and selling it – I think I was really destined to be a journalist!

I did a degree in French and English at King’s College, London and went straight into journalism from there, working for a paper called the Wimbledon Guardian.  From there I moved into broadcasting; local radio and then into regional television. Alongside my freelance career, I started doing some religious broadcasting, presenting Songs of Praise, the Sunday Programme on Radio 4 and making documentaries for the religious affairs department.

I went to Meridian Television when I was expecting my first child – she’s nearly 21 now. I got on really well with my co-presenter Fred Dinenage and we really hit it off. We developed a great partnership and became very much a double-act in the South. It was a wonderful opportunity for me because regional broadcasting offers such a variety of light and shade – doing the day’s news, but also making wonderful features about the region. It also came at a perfect time to be able to be with my family and not travel so much.

I started training to be a lay reader in 2003 and was licensed in 2006. I’ve really enjoyed this side of my work and I’ve tilted the balance towards more ministry and less broadcasting. But I still do a little bit of radio here and there and I’m currently making a DVD to explain what the work of the Simeon chaplain is all about.

My role is to promote the spiritual welfare of older people and also to be an advocate for them. So my week is divided between taking services in residential care homes and taking home communions to people who, although they are still living in their own homes, often find it difficult to get out and about. I visit people one-to-one and I go to the sort of clubs and groups that meet for older people, such as the hard of hearing club or the blind club. I also speak at various events and conferences. So I’m there as a point of contact for older people and their relatives who are going through difficult times.

In the previous few years I had lost my parents and both of them unfortunately had to go into a nursing home. I’d realised how much they would have benefited from talking about their life and spirituality with someone other than the family. Although they did take communion, there was so much more of an opportunity there. It seemed to me that that period of one’s life can be a very fertile period spiritually, if only there were more opportunities to talk to people and perhaps reflect on the circumstances of one’s life.

We’ve had Joan Bakewell and Michael Parkinson being described as national advocates for older people so there is a growing awareness that the proportion of older people is growing very rapidly. I think that when the ‘baby boomer’ generation get to be older, they are going to be very different and not so accepting and stoical in their circumstances. We’re used to making lifestyle choices and we’ll expect to be able to do that in older age as well. There seems very little point in lengthening life if we can’t improve the quality of it too.

It occurs to me that there isn’t a huge difference between my broadcasting and what I’m doing now. Because all my life has been about hearing other people's stories, then distilling the essence of that story and retelling it. And a lot of what I find myself doing is hearing people's life stories and reflecting back to them some of the things they’re explaining to me, and then helping them find a meaning, a purpose and a coherence to what their lives so far have been about. I also try to help them connect with what the future may hold and try to foster a sense of hope.

I think that the challenge presented by dementia is enormous. It’s been described as the biggest health and social crisis of our century and the sheer numbers involved are quite breathtaking. But, in many ways, the people who suffer most are the relatives. I was talking to a young woman the other day whose mother is suffering from dementia and she said, “Every time I go to visit Mum, a little bit more of the tape has gone blank”. And I can see how bleak that is for somebody going in regularly to visit someone they love.

The challenge really for the Church – for people like me and other visitors –  is to say that that person’s identity is still infinitely precious to God and that God still cares about them. From the moment of our conception, right the way through to death and beyond … our identity is special, sacred and valued. Even when it’s not apparent to the rest of us that that person still has quality of life, their personhood is safe in God’s care. There’s a huge amount of joy and humour to be derived from being on those kind of mental health units. There is something special for us to learn about being more in the moment: it’s not about doing and achieving so much as being and receiving.

I’d like to encourage other people to visit in the same sort of ways that I’m doing. There are people who have a real heart for this ministry. Most of all they have to be empathetic listeners – and there are wonderful people like that, so it’s just a question of helping them to have the confidence to volunteer, and equipping and supporting them while they do it.