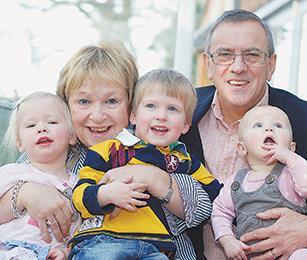 What are your memories of your own grandparents?

Both sets of my grandparents died when I was very young, so in truth I have only very sketchy memories of my one grandfather – a small round man with a red face. My biggest memory of him, I have to say, is the smell of tobacco in his clothes as he kissed me!

Many people say parenting and grandparenting are much more complicated and difficult now than they used to be. Would you say this is true or are the challenges just different?

I’m often asked this question with regard to parenting and I would say that whilst many of the challenges are the same as they have always been, there are some very different issues facing parents and grandparents today. Grandparents sometimes say to me, “Why do we make such a big deal about teenagers nowadays? People of my generation got through it without too much trouble.”

OK, let’s talk about “people of my generation”. One psychologist, now in his sixties, put it like this:
“When I was a teenager it was as if I was walking down a corridor with doors either side. The doors had labels: ‘Excessive alcohol’, ‘Gambling’, ‘Promiscuous lifestyle’, ‘Drugs’. But all the doors were locked. Occasionally I would hear of one of my friends who had gone through one of the doors into one of the rooms, but if that happened it was a big deal.”

And then he went on to say: “Today’s teenager walks down that same corridor, but all the doors are open – and their friends are in the rooms shouting out, ‘What are you doing out there? Come on in!’”

Life is different nowadays. One expert has described the phenomenon of under-age drinking as “An epidemic of binge drinking”.(1*) Or take society’s preoccupation and focus on appearance. The fragile self-esteem of teenagers today is under unparalleled attack with both girls and boys under a bombardment of pressure to look good and live up to a fantasy world of digitally-enhanced beautiful men and women. And then there are the pressures of exams. I know that we’ve all had to go through this, but the modern education system is relentless in its continual testing and targets.
What parents most need is mutual support and help, but many modern parents experience the opposite: isolation.(2*) It is one of the great tragedies of modern life. With few people to share with openly, we can come to believe that what our family is going through is unique.

It’s not that there was ever a golden age of the family, but the extended family was stronger in previous generations and people were often surrounded by relatives from whom they could get counsel on the normal issues of family life.

Of course, there are so many rewards and joys of both parenting and grandparenting – what I have said above should not diminish the truth of that. But having said that, in answer to your question, I believe the words of anthropologist Margaret Mead, who studied family life across countless cultures worldwide, to be very true: “Nobody has ever before asked the nuclear family to live all by itself in a box the way we do. With no relatives, no support, we’re put in an impossible situation.”(3*)

I’m assuming (through your work) you had more knowledge than most when it comes to the potential joys and challenges of grandparenting, but has there been anything that has surprised you since becoming a grandparent yourself?

I think I am honestly surprised by the sheer joy of it. Psychologists have said that the relationship between a grandparent and grandchild is an “emotionally uncomplicated” form of love. I think she meant that because most grandparents don’t have ultimate responsibility for their grandchildren (although many have a lot of responsibility) in some sense the pressure is off. And also grandparents have the distinct advantage of having seen through the whole season of childhood with their own children. You realise that the tests and trials of each age normally pass. When your own children share some trauma that doesn’t seem so very serious to you, the trick we have to learn as grandparents is to stop ourselves saying, “If you’re screwed up about this just wait until they start school/become teenagers/get a boyfriend/a job/go to college!”

Were you given any advice when you became grandparents and if so what was the most helpful and/or unhelpful thing that was said to you?

The most helpful advice we received was not to give our children unasked for advice.

It’s only natural, of course, that we want to impart the pearls of wisdom we’ve gleaned throughout the years – and there’s nothing wrong with that. But how we do it is important. Of all the regrets grandparents have shared with me, the ones that are most often mentioned relate to getting the right balance between caring for their children and honouring their children’s independence. Of course, if grandparents believe that their grandchild is in danger – perhaps because of abuse or neglect – then it is their duty to get involved. But putting those instances aside, we must somehow allow our children to learn to parent in their way.

A good tip I got from a grandparent of eight children was that the medicine slips down more easily when mixed with the sweetener of vulnerability. It’s a little easier to handle a baby that’s crying half the night if you know that others have gone through this and come out the other end. What’s not so helpful is a grandfather who says, “Mmm, strange. At this age, you were sleeping for 12 straight hours.”

A tip I heard from a grandmother sums this up nicely: “Remember that your role on the family team has changed. You aren’t the coach any more: you are the president of your children’s fan club – your job now is to cheer them on.”

Do you have any funny stories you could share about your own grandchildren, or funny things they have said to you?

Just yesterday, our four-year-old grandson, Harry, said to my wife, Dianne, “Nandi, have you bought me a present?” “No,” she said. “I haven’t got enough money.” He looked quizzical for a moment and then said, “OK, I’ll do a deal with you. I’ll give you some money out of my money-box and then you can get me one.” And that’s the great trick of grandkids – they make it all sound so very simple.

1 Confiscation of Alcohol, House of Commons Hansard Debates for 15 Jan 2003 (pt 12).
2 In his book Paranoid Parenting, sociologist Frank Furedi describes this in terms of a breakdown in adult solidarity. See F. Furedi, Paranoid Parenting: Abandon Your Anxieties and be a Good Parent (Penguin, 2001), p. 22.
3 www.en.wikiquote.org/wiki/Margaret_Mead