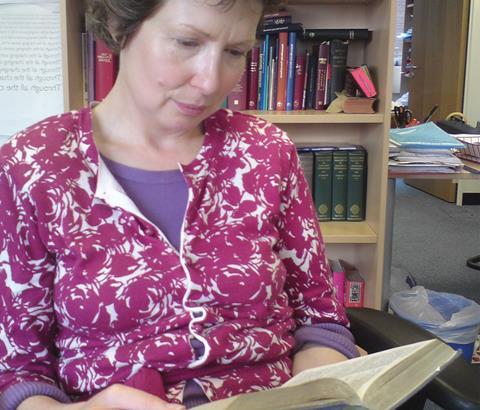 Why I love my King James Bible

This year, we shall be celebrating the 400th anniversary of the Authorised Version of the Bible, but it’s more than just a cultural phenomenon, says Rachel Boulding

When did you last turn to the King James Version of the Bible (KJV for short) – also called the Authorised Version – for your spiritual needs? If it was only this morning, you’re special, because so many people have abandoned it, in favour of modern translations.

Of course, we need the current words, with their clarity and meaningfulness: there is no substitute for grasping the plain sense of a passage. But we seem to have thrown out the baby with the bath water, and left behind all the riches of the KJV for the sake of one type of immediate meaning. We will always want to have modern versions, but we’re missing so much if we don’t have the ancient one as well. For, sitting alongside the newer translations, the old one still has much to give us: depth, poetry, well-loved familiarity, shades of meaning, and its own type of directness.

I’m not old enough to have been introduced to the KJV as a matter of course, when there was little else available (OK, I’m 45). But those for whom it forms their earliest memories have an amazingly rich source of poetic treasure to call upon. These are the words that will stay with us – in those disorientating hours when “all the night make I my bed to swim; I water my couch with my tears” (Psalm 6:6) – and are much more memorable than much in the drab, in-your-face modern translations.

Try it and see. Think of a favourite few verses that you know in a current version. You know the plain meaning of what is being said here, but now try looking it up in the KJV (if you can find your old copy, or that dusty one you inherited). You’ll find more resonant expressions, such as: “The troubles of my heart are enlarged: O bring thou me out of my distresses” in Psalm 25:17 (rather than the stark, even brusque: “The troubles of my heart have multiplied; free me from my anguish” in NIV). There is, of course, “charity” instead of “love” in 1 Corinthians 13, but also the more solid “being rooted and grounded in love”, rather than the NIV’s “rooted and established in love” in Ephesians 3:17.  In places, you might even find that it’s not so very different, but has an extra spark or hint of something direct, or even half-remembered.

Often, when I write Bible studies, I find myself turning to the KJV. I’m surprised at how little I needed to ‘translate’ the KJV into modern English. Often it is crystal clear. Sometimes, too, there are just one or two words that, once explained, make a whole passage easily comprehensible.

The old-fashioned words and their poetry can give us a stronger and more immediate sense of God’s tender love and glorious majesty. They speak directly to our needs today. This is quite apart from their much-appreciated familiarity (especially for older readers) and their literary echoes. Their familiarity gives them a particular power: these words have meant so much to so many people, across the world, for 400 years.

It’s easy to be put off by the dark type, its often tiny size and old-fashioned lay-out. Then there are the odd words and expressions: “thee” and “thou”, “-eth” endings, “abide” and “sojourn”. Some parts, especially the Epistles, can be dense and tortuous. We can’t turn the clock back: the KJV can never be the only version for us now. But if we have both old and new, the two together, we gain so much more.

The KJV is often compared to Shakespeare, and most of us can see the point of not changing Shakespeare’s words. We educate our children to understand their poetry and depth of meaning, rather than translating them into modern English. The comparison isn’t an exact one, but with this in mind, we might make an effort to revisit the KJV to see what it can yield for us.

So it can be used as a regular part of our spiritual life – not just as a heritage ornament. It can be particularly powerful for those of us who have been Christians for a while: sometimes we need the refreshment of seeing something in a different light.

In some ways, it needs to be rescued from the golden glow of heritage. Just as old church buildings shouldn’t be seen as museum pieces, but as settings for a living, thoroughly contemporary faith, the KJV is so much more than a cultural phenomenon. We shouldn’t get stuck in building up a sentimental, nostalgic image of it. It’s like those who “talk in middle age of the lure of language and their love of words. Words said in that reverential way”, which the wise teacher in Alan Bennett’s play The History Boys (Faber 2004) rightly disparages.

For us, as Christians, reading the Bible – in any version – can never be a purely literary exercise. It’s what it means that matters. And the KJV has a great deal to offer, in ways that have nothing to do with its historical importance. It can enrich our sense of God now.

In 2011, we mark its 400th anniversary. There are a range of celebratory events – from talks by celebrities such as Melvyn Bragg and the former Poet Laureate, Andrew Motion, to readings by ordinary Christians in tiny churches, and special services all over the country. As we’ll often be hearing in connection with the anniversary, the KJV has shaped the consciousness and expression of English-speaking people throughout the world in these four centuries. It has done this more than any other book, but this is because it is not just a book.

These are the words of Scripture, so we come reverently, looking for the words of eternal life, on which we can base our whole existence. Like the disciples on the road to Emmaus, our hearts “burn within us” as we read or hear them (Luke 24:32).

But with the KJV there is something else, too. Because the translation was done in a particular way, at a particular time in the development of the English language and its literature, its words and phrasing are especially rich. Like good poetry, the chosen words suggest depths and layers of meaning neatly and movingly. They also have echoes of Shakespeare, having been produced at about the same time (though, it came too late for the playwright himself; he used the Geneva Bible of 1560).

The KJV also first coined many words and expressions that have become part of the language – so much so that most people wouldn’t necessarily think of them as biblical, and usually attribute them to Shakespeare. So we have: “Escaped with the skin of my teeth” (Job 19), “they shall reap the whirlwind” (Hosea 8), “the signs of the times” (Matthew 16), “the powers that be” (Romans 13), and many more.

In its heightened language, the KJV gives us a richer appreciation of the wonder of God, which we can’t sense so deeply from anywhere else. So, just as we wouldn’t want to knock down old churches, we shouldn’t leave the KJV unread. For it’s not just a monument in our heritage, it is something that can shape our life of faith right now. The old version can stand alongside newer ones, and tell us the Good News in a dynamic way.

•    Rachel Boulding is Deputy Editor of the Church Times, and a contributor to New Daylight Bible reading notes. Her book Celebrating the King James Version: Devotional readings from the classic translation is published by BRF at £9.99 ISBN 978-1-84101-757-0

•    A one hour documentary programme on BBC 2, presented by Melvyn Bragg, looking at the Bible’s extraordinary legacy and how it has helped to shape the world

•    For information on the KJV 400th anniversary celebrations, click HERE.