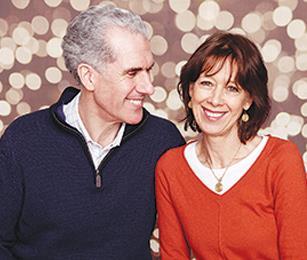 Pippa Gumbel talks to Claire Musters about life with Nicky, and stepping out into the limelight

I was given Nicky’s number when I wanted to take a friend to a nightclub because he was a member. I rang him up and asked if he could get us in. He was having some people round to supper so we went and joined in. We became friends and then Nicky went off to Cambridge. In his second term, during the mission to the university, he became a Christian. When I next saw him he was running round with tracts in his pocket trying to convert everyone. I thought he had gone mad!

I grew up going to church occasionally and went, for a time, to a convent school. I was given the principles, but I hadn’t really understood who Jesus was and that I could have a relationship with him.

Then, when I was 18, I started going to a place called The Kitchen. It was where a group of young Christians gathered to eat and talk about their faith. I thought they were wonderful people and one of them showed me the verse from John 10:10: “I came to give life – life in all its fullness” (NCV). As a result, I prayed to ask Jesus into my life and began that relationship.

From the moment Nicky became a Christian, he was passionate about telling his friends about his faith. Although he did his legal training and started working as a barrister, full-time Christian work was always at the back of his mind. We were very involved in HTB, even back then, so we spent some time praying about whether it was right for Nicky to seek ordination. We both read Nehemiah and felt that the Church in England was in need of restoration and we wanted to play our part in that.
Many people ask me what it is like being married to Nicky. I usually say I have nothing to compare it with as I haven’t been married to anyone else!

Working together seems to work well for us and it’s such a privilege. I wasn’t quite so involved when the children were young, as I felt they were my priority then, but now I am doing more and more with Nicky. It’s great to feel we are in it together.

Nicky has gradually encouraged me to do a little bit more and then a little more. I used to be terrified just having to say ‘hello’ into a microphone at a conference. I would just try and do the introduction for Morning Alpha and I would leave out half the things I was supposed to say. I’m not a good reader, so a page of notes to read out fills me with horror!

I had never seen myself giving talks but, gradually, with a lot of encouragement and words from God, and Nicky, I felt I should step out more and see what happens!

I think having a sense of humour helps. Laughing is good for us because it stops us being too intense. If you can laugh when you make a mistake, you can turn the situation to your advantage. I think it’s important not to take oneself too seriously.

I’m on a long journey. I make mistakes all the time, but one of my favourite verses is 2 Corinthians 12:9: “My grace is sufficient for you, for my power is made perfect in weakness” (NIV). I also hope it encourages people that if I can do it, so can they.

Life in the spotlight

I don’t think Nicky and I have ever felt like a ‘high-profile’ couple – we are just very normal with all the same pressures of life that most people have. We definitely haven’t got everything right.

When the children were younger, Nicky was only one of the curates so we were just one of the leadership families, and not ‘the Church Family’, which I think must be much harder.

I wanted church life to be a positive for the children rather than a negative and I always wanted them to feel they were more important. There was a time when we stopped having evening church meetings in the house because the children needed space and I also stayed in on those evenings to spend more time with them.

There are lots of benefits to bringing up children in the church community. All the youth leaders were wonderful in that they did not put any pressure on the children. When one of my boys wasn’t particularly into church, an older boy would throw a rugby ball around with him after the service. It made such a difference! The children had lots of good role models who were a bit older than them and who befriended them.

Looking back, I would do many things differently, particularly as a parent, but having great friends to work with and pray with when we were struggling has been such a help. I think we need lots of grace for families where the parents are in leadership.

Now our children are grown and are following their own callings. Our eldest son and our daughter have both qualified as barristers and are working for different organisations in India.

Henry is a Legal Fellow for International Justice Mission and he helps to rescue bonded labourers from brick kilns and stone quarries, and draws up the legal cases. Becs is head of investigating for Justice and Care and oversees three offices in India. They rescue young girls who have been trafficked into the sex trade.

We are so proud of them both. It is sad not to have them in the country, but they are doing what they feel God has called them to.

Our youngest son is a curate at St Peter’s Church, Brighton, and he is doing amazing things there. We are so pleased that he and his family live in England.

Looking to the future

It’s such a privilege to be a part of what God is doing and Alpha still excites me. We have just moved the morning course into our newly done up Brompton Cafe in the crypt at HTB Brompton Road. It has a great atmosphere. We always help host an Alpha group in the evening as well and it is so inspiring to see lives changing over the 10 weeks. I’m also excited by church planting and partnerships, and seeing the Church in the UK coming alive.

God is always teaching us new things and I think it is important to keep saying “I’m available,” and to step out and take risks. There is always a new season for everyone.

I’m also encouraged by the appointment of Justin Welby as Archbishop of Canterbury and the new Pope, Francis. There is a young radical generation rising up. We have the biggest Alpha we have ever had at HTB and have had to go multi-site. On the first night we had 920 people arrive at Brompton Road and 340 arrive at the Onslow Square site. These are exciting times for the Church.