'I would love people to find hope in what I'm doing' 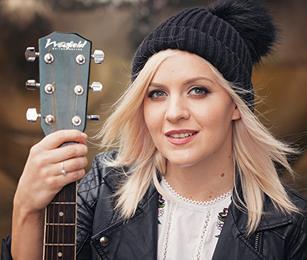 It’s not often that we get to quote Dolly Parton. But for singer-songwriter Philippa Hanna, the struggles, setbacks, challenges and triumphs she’s faced in life have been given value and meaning through following one of the maxims uttered by the bold and colourful queen of country music: “Figure out who you are, then do it on purpose.”

“I figured out that sharing my feelings and experiences was what I do best and that’s what people respond to most,” Philippa explains. “So I thought this is what I need to do; I need to be really honest and open about what I am going through. That’s what my audience needs.”

From stepping on stage for her first public performance in 2007, Philippa has been tireless in reaching out with her beautiful voice and powerful lyrics.

She has achieved 1,000 live performances in 25 countries over the past 10 years, releasing five albums and a live DVD. She has opened tours for familiar names such as Lionel Richie, Little Mix, Leona Lewis, Wet Wet Wet and Anastacia, and has appeared on Songs of Praise and BBC Radio 2, all as an independent artist.

Experiences from her troubled youth, issues with anxiety and depression, and then finding and living out her Christian faith have infused her writing and performance, bringing a depth and integrity to inspiring and uplifting songs. And this is winning her a wide, loyal and appreciative audience.

“I feel I’ve become better at understanding who the music is for,” she says, “and what people need from me.”

This first became apparent to her with the release of her EP Out of the Blue in 2011. Songs like Raggedy Doll, I Am Amazing and Happy in My Skin “touched a nerve”.

“The songs talk to people about things like mental health and self-esteem,” she says. “Often we want to show ourselves to people as the finished article, but they need to see the journey, with the meandering parts where things didn’t happen as planned.”

For Philippa, the journey began in the wings watching her parents perform on stage as entertainers – telling jokes, compering shows, singing, playing music and acting. Her brother was the bass player in Jamiroquai and her cousins were in Embrace. She loved to see how showbusiness could make people laugh and smile, and escape from their lives. But she was shy, so performing didn’t seem an option for her.

“I think the impulse to get on stage came when I started writing songs,” she explains. “I was 13 when my dad bought me a keyboard and some basic recording gear. Once I started writing, I realised I was passionate about the songs and wanted to get them heard. If I didn’t sing them, no one was ever going to hear them.”

But the music industry is ruthless, its pronouncements harsh and rejection is commonplace. Her auditions were unsuccessful and the demos sent back week after week, marked ‘unread’.

Philippa had had an ongoing battle with anxiety and depression. In her teens she had fallen in with the wrong crowd and had dropped out of education. She couldn’t seem to find a way to pursue her heart’s desire and now, at her lowest point, she spent six months watching daytime TV in her pyjamas, feeling life was over.

“I used to watch MTV and see people living their dreams. I thought there was no way I was going to do that.”

Then she found some Christian friends. “It was as though I was being led towards them, led to ask questions. It was almost irresistible and wouldn’t go away. I had this glimmer of hope inside me.”

Philippa joined them at a concert in Sheffield. “It was actually a worship event. I’d never heard of such a thing. It was completely new to me. But a guy about my dad’s age, with a guitar, was leading and I immediately felt affection for him because he reminded me of my dad. He started to sing songs about Jesus and it really impacted me. I felt overwhelmed. Everything I’d been dealing with began to come to the surface. So I started to pray.

“I asked God to prove to me that he was real and to help me start my life over. From that moment, things changed. There was a peace pursuing me, to a point where I thought there is no turning back from this.”

She moved to Sheffield so that she could attend the church of her new friends and a few months later picked up her guitar again and started to write songs, new songs reflecting her new life and the faith she had discovered.

“It felt like the people around me started to go on that journey with me and before I knew it, this was a full-time ministry.”

It was a natural and easy step, she says. “You can’t help but talk about what has just happened to you. When you’ve been at rock bottom, in the darkest place, of course you want to share whatever it is that has helped you.”

Her message was simple: “Faith has transformed my life and if there is any chance you think it could transform yours, you have nothing to lose by just tasting and seeing, saying a little prayer and seeing where it leads you.”

Philippa is building a name in the Christian and Gospel scene, but she has still maintained a desire to break into the mainstream music industry. This is an expensive endeavour and she has been fortunate in receiving the support of her fans through crowdfunding initiatives.

“For us, pulling together £15,000 is a mountain, but for a major label that is something they’ll spend on an event or a Facebook campaign for one of their artists. We are up against it, but we always ask that God will take our efforts and add a little divine favour.

“It seems a lot to source from people for something as trivial as music, but I’ve seen time and again that music is life-saving.”

There is a personal cost, too, in her work, particularly as she shares so much of herself through her songs.

“It’s easy to begin to value yourself based on these responses, so it’s almost a daily discipline to say my worth doesn’t come from other people’s evaluation of me but from who God says I am and, ultimately, what I am doing is a service to him.

“Sometimes you can get wrapped up in how many people liked this video or wondering why it hasn’t gone viral yet. Whenever you are dealing with those human things, I think it’s a good discipline to keep going back to God’s Word and remembering that I am just here to share something. It’s not my job to control who likes it or how people feel about it, just to share it in love. Really the rest is in God’s hands.”

Philippa values the support she receives from her family and friends. Her manager is also a Christian, and she now works with her husband Joel Cana, formerly a drummer with The Gentlemen.

“I’m not going to pretend it’s easy,” she says of spending so much time together. “But we share this really beautiful thing – this ministry – and see wonderful things happen. It is challenging, but it was more challenging when we were doing separate things and weren’t seeing anything of each other.

“I’m grateful that my husband is a sturdy man of faith. He’s extremely consistent and very serene. He speaks a lot of life into me when I’m tired and need that extra support.”

Philippa acknowledges that they work hard. “Every step of the way we’ve prayerfully sought God on how to reach people, how to make things work financially, and as the doors have opened we’ve walked through, and as they’ve closed, we’ve picked ourselves up and tried something new.”

Currently touring Britain throughout the summer, how does she make time to write the songs?

“Sometimes it’s spontaneous. I love those times. I find that songs come when I’m doing mundane things like laundry or washing up or folding socks. I’ll find myself singing something. But sitting down with that thought and making it good does take a bit of planning, so it’s great to set aside time to write with people.”

This collaborative approach focuses the mind, she says. If you have someone sitting across the table, there’s a little more pressure to complete the task in hand. But she and Joel now visit Nashville, the home of country music, to work with people there.

“It’s a bit like speed dating. We often have two writes a day and you go from writing room to writing room, with strangers. In the first 10 minutes you spill your thoughts, your life. You say this is happening and this is what I feel God is saying, what he’s been teaching me. Those conversations lead to the songs.

“There’s a wealth of depth and talent and other points of view which makes for such rich songs. It’s good to draw on other people’s talents.”

In addition to the songs though, she has told more of her story through her book, Following the Breadcrumbs, and posts regularly on Twitter and Instagram. This year she launched a YouTube feed called Inspiration 365. Each day she posts two minutes of encouragement and inspiration, urging viewers to be the best that they can be in 2018.

“I try to bridge the gap between tours and my social media presence,” she says. “And I set myself this challenge at the beginning of the year to upload every single day. I thought it would be a great thing to do – to grow my audience, to reach people who are already there and to share some of the many, many thoughts that I’ve been collecting.”

Her aim is to reach a million views, but it has also led to a book opportunity – a daily devotional published later this year, and the chance to visit schools and to speak to young people about goals and ambitions, and self-esteem.

What does she hope people will gain from her songs, her writing and her music?

“I hope they can find hope, wherever they’re at. If they’re in their darkest hour, I hope that they find that little ray of light that says ‘I can start again, God’s not done with me, I’m here for a reason and I count’. I would love for people to find hope in what I’m doing.”

Catherine Larner is a freelance journalist based in Suffolk