'I want people to discover the good news of Jesus' 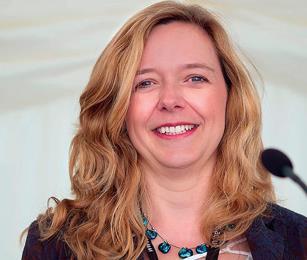 Stories told by men, about men, for men, have dominated our understanding of the past from the earliest times. While we can accept that we differ culturally from previous generations, we shouldn’t believe that women then were not of interest or significance – but how do we unearth the contribution they made, and why does it matter?

“I want a woman to look up to,” says renowned New Testament scholar, speaker and writer, Canon Dr Paula Gooder. “As women, we need our own role models to help us in our faith.”

And the women are there. They may not have a high profile in the accounts of first century life but, by peering into the cracks, we can see women who were important, says Paula.

In a new book, an “imagined history”, Paula has introduced us to Phoebe, who is mentioned by Paul in just two verses in his letter to the Romans, but who holds a huge fascination for scholars.

“She is tantalising,” Paula says. “There are just four or five things on which scholars agree about Phoebe. She was a deacon, holding a significant role in the church. She was wealthy, being a benefactor or patron. Her name was often used for slaves, so she was probably a freed slave. And Paul entrusted her with his letter to take to Rome and to plan his mission to Spain … This is a story begging to be told!”

Phoebe, published by Hodder this summer, took five years to write and Paula says that, despite her fascination for her subject, it proved a struggle.

“It took me ages to get it right, to have the confidence to write it,” she explains. “I love reading fiction and I know what a good novel looks like, so it was a challenge to find my voice and write in a way that I wanted it to be written.”

Paula is a respected academic, who specialises in the study of Paul, and has written a number of devotional and study guides, but this was her first attempt at writing fiction.

“I am aware that people – and particularly women – struggle with Paul,” she says. “I wanted to find a way to communicate Pauline scholarship in a completely different way, which women might find attractive and I thought a book of fiction might be the way to do that.

“When you enter the world of the imagination, you lift something off the page and it becomes more real. It makes more sense to you.”

We are often encouraged to imagine ourselves in the Gospels, to hear Jesus’ words speaking to us, but we don’t often approach Paul’s writing in the same way, she explains.

“I was trying to illustrate that even in the first century, people would have heard Paul differently depending on what had happened to them in their lives. If you were a slave, hearing Paul talk about adoption would have had a real impact on you. So I wanted to give people an emotional way of understanding why Paul’s letters are so important.”

Paula has been able to draw on her own love of reading historical fiction in approaching this endeavour. “One of my great heroines in terms of historical novels is Philippa Gregory,” she says. “I think, by reintroducing women into the history around Henry VIII, she’s changed the map. I think there’s scope to do that in the first century, so I’m following in her footsteps.”

But Phoebe isn’t strictly a novel, Paula says, as she has remained true to the facts.

“I was following a story that was constricted by what we know from the New Testament. There were certain places I wouldn’t go,” she explains. Furthermore, she wants her readers to be clear about what information she has drawn on to tell the story.

“I am an incorrigible academic, and it’s been drummed into me that you are not allowed to say something without telling people where you got it from.” So there are extensive notes at the back of the book. “I wrote the notes for people like me who want to know which bit is true and which bit isn’t.”

In the book, she tells stories of ordinary Christians at the time of Rome and how they came to faith. Were they persuaded by the intellectual argument or the emotion, or was there a moment where they needed to be forgiven?

“What is it about the Christian story that grabs people and makes them say: ‘This is something that’s going to make me turn my life over’?” says Paula. “I hope that the story will inspire people to think about evangelism and mission today, about how they articulate their faith and how they talk to other people about faith.”

Making the Bible accessible to ordinary Christians is fundamental to Paula’s goals in all her work, and this book no less so.

“I am driven by wanting people to encounter the good news of Jesus and to discover good quality scholarship on the New Testament,” she says. “But I love creativity and if I can find a new way to present that, I will give it a go.”

Paula was a tutor in Biblical Studies at Ripon College Cuddesdon, near Oxford, and taught at the Queen’s Foundation, an ecumenical theological college in Birmingham. She has worked for the Bible Society, was a freelance speaker and writer when her two daughters were young, and today works full-time for the diocese of Birmingham as the Director of Mission Learning and Development.

“We’re exploring different ways of helping people to be confident about their faith, to share their faith with others, to set up new worshipping communities – we’re exploring mission in a range of ways,” she says of the role.

And she believes people are eager to learn. “If you can marry accessibility with depth, then people will absolutely lap it up,” she says, adding that we are all likely to be interested in deep theology if it is presented with stories or illustrations that make a difference to our everyday life.

For Paula herself, she says she never intended to dedicate her life to a study of theology.

“I grew up in a Christian household – my father is a minister in the Church of England – so I have always been somebody who believes in Jesus and his impact on my life.

“When I was applying to university, I knew I wanted to do Classics. I loved Latin and Greek; that was what I really wanted to do. I sat down to write the form and instead I found myself writing Theology. I just felt overwhelmingly convinced that that was what God wanted me to do.”

Her favourite verse supports this. In 2 Corinthians 5:14 it says, “for Christ’s love compels us”, meaning the love of Christ holds us captive, or urges us on. “The word can mean both things,” she explains. “I never thought I wanted to be a theologian.

“No one is more surprised than I am at all these books I’ve written and the talks I’ve given. That’s not what I thought I would be doing, but apparently it’s what God had in mind.”

After graduating from Oxford where she studied under Tom Wright, there were twists and turns along the way, she says, but each time she felt she might take another path, God pushed her on to the next stage. “Each step I felt God say ‘and carry on, and carry on, and again, and again’. It’s felt as if I’ve been held captive by what God wants me to do.”

Even as Paula has received considerable praise and respect for her writing and presentations, making her subjects interesting, relevant and accessible to her audiences, she has nevertheless found her role difficult at times.

“I may appear confident, but I’m not, for all sorts of reasons,” she says. “As a woman in the public eye in the Church, there are times when it can be really challenging. People criticise you a lot.”

She hopes, though, that her position and achievements will be an encouragement to other women.

“For me, if I can achieve anything, it’s giving other women the confidence to have a go. Maybe you thought you’d never get up on a platform and give a talk, well, have a go! Maybe you’ve never thought you could do a theology degree, but have a go.”

Reading and listening to Paula’s passion for her subject is sure to be an encouragement to all of us and she urges us to take up opportunities to explore our faith further.

“The word ‘disciple’ means someone who learns,” she says. “One of the most important and intriguing questions we can ask of ourselves on a regular basis is: ‘What am I learning about my faith that is new?’ If you’ve not learned anything new about Jesus in the last year, you need to ask yourself whether you are genuinely a disciple.”

Paula is also keen that we question what we believe we have understood in our faith.

“I think one of the key Christian disciplines is curiosity. Asking questions. As soon as you think you know something to be incontrovertibly true, ask yourself why you know that, what evidence do you have for that?

“I think part of the problem is that as soon as you know a story really well, you don’t read it in depth any more,” she says and calls us to return to the text and read it again carefully. “Take up different translations, for example, or read a cross-reference Bible. There are a vast amount of riches we miss simply because we aren’t familiar with the Old Testament. If you read the passages slowly and look up the Old Testament references, then the Bible comes alive as never before.

“We are called to learn, to ask questions and to follow, and it is really important that we do.”

Catherine Larner is a freelance journalist based in Suffolk