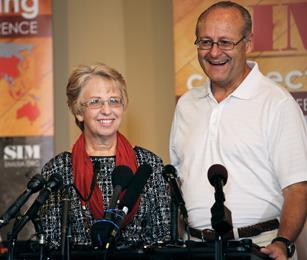 Missionary Nancy Writebol contracted the Ebola virus in July whilst working in Liberia. She tells her story to Suzanne Green ...

I give them eternal life, and they shall never perish; no one will snatch them out of my hand.” As I lay ill with Ebola, not knowing whether I would live or die, God brought this verse from John to my mind again and again.

In August 2013 my husband David and I left our home in North Carolina, USA, headed for Monrovia, the capital of Liberia. Throughout our 40 years of marriage we have shared a heart for world mission. We had served for five years in Ecuador, followed by eight years in Zambia. Now God had called us to serve him at ELWA Hospital, a ministry of SIM (Serving in Mission).

At first, my job was personnel co-ordinator, and I was responsible for helping new missionaries settle in. But I also wanted to work part-time in the hospital. I got my opportunity when the West African Ebola outbreak reached Liberia. It was my job to help doctors put on their personal protection equipment (PPE), and then spray them down with a bleach solution when they took off these suits. I wore a gown, gloves and, sometimes, a mask, and there was a line on the floor that I wasn’t allowed to cross.

I was happy to help in this way, and as the threat from the virus increased, I often worked 12 to 14-hour shifts. Sometimes I worked late into the evening, leaving the building when the mosquitoes were at their worst. So, when I left the isolation unit feeling unwell on 22nd July, I thought I must have malaria. A few days later the doctors told me they wanted to test me for Ebola – just so they could rule it out. But the test came back positive.

David delivered the news, and when he tried to hug me, I said, “Don’t, just don’t!” It was just too risky. The doctors said, “Nancy, we are so sorry.” I felt bad for them. But I had a great sense of peace, and I know that was from God. “It’s going to be OK,” I said.

The coming week was very dark and rainy in Liberia. The waves seemed angry. One day, the skies just opened, and it poured. Liberian friends said they had never seen anything like it. And those days seemed especially dark to me. I was very lonely – David could only come to the bedroom window at night. Yet in the darkest hours God would bring Scriptures to my mind. And every morning I would wake up and think, “Oh, I’m alive!”

I was given supportive care by the ELWA health team, as well as the experimental drug, ZMapp, which had not previously been given to humans. And then it was decided that I would be airlifted to Emory University Hospital in Atlanta, Georgia, USA. When they put me on the plane, I knew I was really ill, and that I might never see David again. But God asked me, “Am I enough, Nancy?” And I said, “Yes, Lord,” and continued to trust him.

Our two grown sons, Jeremy and Brian, were waiting for me when I arrived in Atlanta on 5th August. It was a wonderful encouragement! I received excellent care from the five doctors and 21 nursing staff at Emory, some of whom were Christians. It was amazing the way they responded to everything that was going on, rehydrating me, replacing electrolytes, etc. They gave me a further dose of ZMapp, but I think the supportive care was the most important thing. I remember the day that they told me, “You’ve turned the corner”. I decided to get up and have a shower. And I did!

On 19th August I was declared virus-free and discharged from hospital. As I left the isolation unit, the doctors and nurses lined up to say good-bye. There was applause and cheers and hugs. All I could say was, “To God be the glory!”

As I look forward to celebrating Christmas with my family, I reflect that we have no idea what the new year holds. But those of us who know the Lord can trust that no matter what happens, he is with us – and he is enough! If you wouldn’t call yourself a Christian, I encourage you to put your life in Jesus’ hands. The Bible says, “If you confess with your mouth that Jesus is Lord and believe in your heart that God raised him from the dead, you will be saved.”