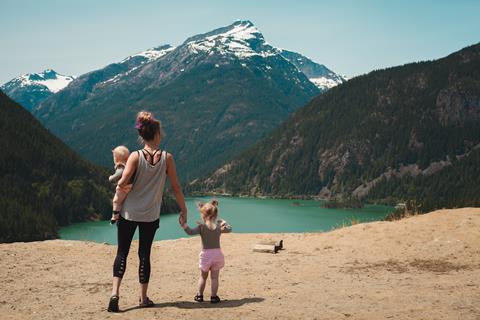 At what point did you begin to realise that these family holidays weren't quite what you thought they were?

Well, I genuinely thought we spent our summers travelling around Eastern Europe in a camper van for the sheer joy of it. I only later found out when I was a teenager that in fact, we had 2,000 Bibles layered underneath the truck. So it kind of made sense that certain things happened on the trips. That's why we were meeting people in the woods, and we had to go for these walks, and dad was in the van for ages with these two guys. It was actually a relief to find out that they were smuggling Bibles and weren't secret drug dealers! That's why mum took us off praying when the van got taken upon on some ramps because they put petrol instead of diesel in - they were terrified that the people would see the fake floor and see all the Bibles, or that the ramp would break because the van was so heavy with all the Bibles in it. We stopped going when I was about nine, when I started asking really difficult questions like, "Who are they?" and "Why are we doing that?" or "What are all those bags?” I've actually recently joined the board of Open Doors [the charity Arianna's parents were working for], so it has come round full circle.

As you grew up, did you have any idea about how you wanted your life to unfold and what career path you want to go down?

I was one of these people that wanted to be everything. One minute, I'd want to be an air hostess, and then I would want it to be a Mounted Police Officer riding on a horse into a riot. I wanted to do all those kinds of things. All my friends would laugh at me and say, "Ok, what are you gonna be this week?” And it wasn't until I was 32 that I actually began to work for Mercy UK, and I realised that the reason I never knew what I wanted to do was because what I wanted to do, and what was in my heart to do, didn't exist yet.

I actually trained as a teacher and started my own business running a shop for a while. I worked for the NHS for three years. We so quickly want to put ourselves in a box and say "This is my career!” And it's a delight actually to tell young people especially, "Don't try and find what you're going to do for the rest of your life, allow it to unfold, be on the journey with that".

For anyone who's unfamiliar with the work of the Mercy UK home, can you explain the sorts of situations young women are coming with?

All the young women have life-controlling issues like eating disorders, self-harming, depression, anxiety, OCD and these are really symptoms of much deeper issues. Every young woman who comes to Mercy comes from a Christian background, they have a faith. They chose Mercy because they want to work out their relationship with God within the context of what they've been through, to find their healing in Him, their hope in Him and transformation from a Christian perspective. It's a really interesting journey to walk with the Church as well, we work together with the churches of the women who come to us.

Mercy UK is committed to restoring hope and transforming lives by empowering Christians to develop their relationship with God, self and others.

Photo by Josh Willink from Pexels