'I have to make the presence of God my priority' 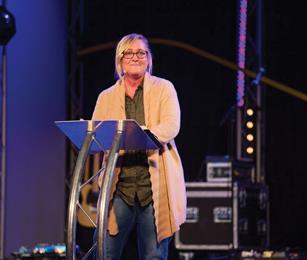 Leaders today are turning into ‘celebrities’, congregations are being numbered by Facebook followers and people are responding to sermons with likes and hashtags.

The illusion of modern living has crept into the Church so that we are more than ever wanting a quick fix, seeing the ‘bigger is better’ model as success, and being attracted to the glamour of personalities rather than the depth of teaching and discipleship.

“Visibility and fame have become too important,” says Christy in her latest book, Transformed. “Serving in the local church, just to serve God, has in many ways lost its appeal.”

Ironically, though, Christy has stepped away from pastoring her own congregation in California, as she seeks to address what church in the 21st century is supposed to look like.

For 11 years, Christy has led the Yorba Linda Vineyard Church. It’s where the Vineyard movement began, founded by her father-in-law John Wimber, and has been a time of huge blessing. There have been challenges, of course, most notably when John died in 1997, and recently Christy has experienced what she calls a “winter season” as she and her family have faced illness and opposition.

“When our dad died, it was a major transition,” she says. “It was very painful because Vineyard had been our whole life up until that point.”

Christy had lived next door to the Wimber family as a child, and came to Christ through physical healing while at a Vineyard church when she was nine. Marrying John’s son Sean in 1990, she has been immersed in the Vineyard movement ever since, leading her local church, speaking at events throughout the world, and in ghosting a number of books based on John Wimber’s writing.

“As a leader, I think that will always be the challenge. If your identity is in anything other than Christ, it will fall apart. I think a firm identity allows you to see what God is doing, what God is saying. But you don’t know that your identity is in the right place until you are shaken. I’ve had to walk through that. You have to lay down everything and trust the Lord.”

While juggling the church leadership and being a wife and mother, Christy has delighted in her speaking engagements internationally and she hopes that the future will see her able to focus more on this work, encouraging the local church across the globe, while also training women as leaders for the Vineyard movement.

“I’m a pioneer,” she says. “I felt I wanted to plant lots of churches in different ways. I felt the Lord teaching me how to trust him on a deeper level.”

Sadly, though, this has come at a cost for the Yorba Linda congregation. Christy and the leadership team couldn’t find anyone to take on the role she was leaving behind, and didn’t feel any other options were appropriate.

“One of the hardest things I’ve seen in the Church through the years is that leaders don’t know how to hand things over well, to lay things aside, to quit when they are supposed to quit. They are holding on to something which has obviously run its course. I felt the Lord made it very clear: finishing well is very important.”

A meeting with the church leaders was very emotional, but she received support and encouragement that her decision was the right one.

“To gather all my leaders and get everybody on the same page was phenomenal,” she says. “Person after person said, ‘This is where I got saved,’ ‘This is where I got filled with the Holy Spirit’. They said, ‘We know what to do now, we’re going to be fine’. I felt it was one of those things that a leader never really gets to see. Even though it was difficult for people, it was unanimous; it was God’s doing.”

The church has closed, and the membership continues to meet in house groups, while also seeking a place to worship elsewhere in the community.

Christy hopes and trusts that a positive impact of this decision will be widespread.

“I understood that news of this would go round the world, as with anything I do. I don’t have the luxury of doing something and not having that ripple effect. It wasn’t until I walked through this with my church that I realised it was going to reveal my reputation around the world. Either people trust my voice, or it will ruin me. But I feel I’ve done what I was supposed to do and my reputation is up to the Lord. I felt the Lord say that this would end up being a model to help leaders transition well.”

While reaching thousands through her speaking engagements over the years, Christy has also written extensively. Her latest book is possibly the most personal, honest and challenging. Coming from her own struggle over the past two years in laying down her role at Yorba Linda, it presents a raw vulnerability and wisdom. Called Transformed, it was launched in the UK earlier this year.

“This was a different project,” she says. “I felt that in order for this to influence I had to be more vulnerable. I had to go back to give some credibility to who I am and why I am. People relate to our humanity.”

It is a powerful book which Pete Hughes, from King’s Cross Church in London, says is “accessible and hard-hitting, but full of grace. Thought-provoking, yet so practical.” And Simon Ponsonby from St Aldate’s, Oxford says, “Christy brings a prophet’s challenge, a pastor’s care, and a teacher’s instruction to keep the Church in step with the Spirit.”

“I really felt the Lord spoke to me, and said this is time,” Christy says. “Then when you begin something you either get a revelation or you don’t. But it just started pouring out and it hit so much of what I see in Church culture today around the world.”

There is a fine line, then, between people following a ‘personality’, and getting to know the leader as a person, understanding how an individual has been shaped by their own life experience.

“If you are not vulnerable, you are not influencing,” says Christy. “I think we are in a time and a culture when the younger generations value this even more. Authenticity is what is drawing people in. You don’t trust somebody you don’t really know. I’ve had to learn that through the years and I think it is very important for all leaders.”

She feels that people today are drawn to relationship. They are not concerned with denominations, or with the gender of who is leading, she says. And yet being a woman in leadership is still a battle that Christy is facing.

But Christy is keen to stress this isn’t about the Church being ‘relevant’.

“It’s about being obedient. It’s about advancing the Kingdom,” she says.

“I think that when the Church gets too good at being the Church, the Lord tends to shake it up a bit. The Church is busy, but it’s busy with the Church. We have all these events, but I think we’ve confused the size of the gathering with the ‘success’ of the gathering.”

The Church needs to respond to changing needs, she says, for example the rise in mental illness.

“I think what was productive years ago is not helpful today. So the Church often does more damage. We are operating from an old healing model. This is one of the areas where the Church needs to stop and readjust. The leadership has got to get equipped.”

For Christy, personal experience has heightened her understanding of these needs and how to address them, she says. And she feels we have fallen into society’s instant fix mentality with healing as well as other areas in the Church.

“We need to persevere, because that’s the way of the cross,” says Christy. “The popular message of heaven now, or healing now, raising the dead – all that stuff has run its course. We need to get healthy again. We’re in a battle and in battles we see victories and we see people die. It’s important there’s clarity in that.

This will spring from being immersed in Scripture, she says. “I’ve been to events where I’ve been the only person with a Bible. It’s just testimonies. This is running its course because people are realising the fruit isn’t lasting, so I think that is coming to an end. We’re due another bout of healthy theology because what we believe is how we behave. I’m a big believer in word and spirit.”

Stepping aside from pastoring Yorba Linda, Christy has continued with her speaking engagements in Europe, where she has been sharing her belief and passion for the power of the local church. She has also been able to spend more time with her family, particularly as her husband recovered from illness and injury.

“I felt like I just wanted to breathe,” she says. “It would be so easy to go right into the next thing. But I need to make sure that my next steps are not what man is trying to pull me into, but more like what God is saying for this next season.

Her schedule still sounds an exhausting undertaking, but Christy says she thrives on the international engagements. “If that is what God has called you to do, he gives you the grace to do it,” she says. “This is what feeds me.”

+ Catherine Larner is a freelance journalist based in Suffolk