I can only be who I am 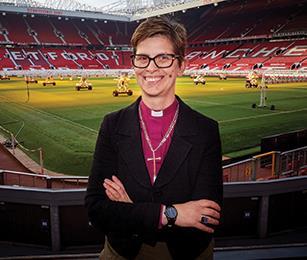 When the Church of England appointed the first female bishop three years ago, it naturally drew a lot of interest. Coming 20 years after the ordination of women as priests, it marked the conclusion of decades of praying, struggling and campaigning. Women could finally feel that they had been heard and their contribution and potential recognised and used.

But for that lone individual, Libby Lane, who took on this pioneering role when she became Bishop of Stockport in January 2015, the attention was much more intense than she ever imagined, and more wide-ranging.

“It was extraordinary,” she says. “In the early months, there wasn’t a single day when a complete stranger didn’t wander up to me in the street, the supermarket, on the train, while on holiday, and say ‘you’re that woman bishop, aren’t you?’

“Often the conversation went on ‘I don’t go to church but…’ or ‘I’m not religious but…’ It somehow struck a chord in people. They felt that somehow this was their story as well as mine. It was something that was affirmative and positive and hope-filled for them and their situation, whatever that was, and that was remarkable.”

If the profile of the role took Bishop Libby by surprise, the tasks and responsibilities she had to undertake were more familiar.

With 25 years of experience in ordained ministry, for the preceding 12 months, she had been selected as one of eight women who were Participant Observers in the House of Bishops and she had built contacts and relationships locally, regionally and nationally. Prior to that, she had been part of the senior leadership team in the diocese.

“When I was called to serve as bishop,” she explains, “it was in the diocese that I had served for about 15 years so, although I did move house, it was only about five miles!”

She knew the geography, the people and the culture in taking on the role. But she acknowledges that, above all, she trusts that she is enabled by God.

“There are capacities that I bring,” she says, “but nobody can be up to this! There has been a freedom from knowing that I can’t possibly do it and not having the anxiety that it all depends on me.”

The foundation for her ministry springs from the Bible passage she chose for her installation at Chester Cathedral, she says, and quotes 1 Thessalonians 5:24: “The One who calls you is faithful and he will do it.”

So her priority is nurturing her relationship with God and each day is shaped by morning and evening prayer, with space for a cell group, a spiritual director and time off all fiercely protected. “I am somebody who works better with some kind of external framework and expectation,” she says.

“When I was a parish priest, colleagues and other people from the church would meet with me daily to pray. No longer being in that kind of local community network, I find ways to pray with others. If I have meetings at the beginning of the day, I’ll try to arrange them half an hour earlier so that we can pray together.”

Bishop Libby sees every interaction in the diverse responsibilities of her role as an opportunity for highlighting the Christian message.

She has taken on the role of vice-chair of the Children’s Society, which works with vulnerable young people, and chairs the Diocesan Board of Education in Chester. And she chairs the body governing the theological college where she trained in Durham: “I’m honouring those whose call to Jesus takes this particular route and lending my weight to try to make sure they thrive and flourish,” she says.

“Meetings,” in whatever area of her expertise, though, “need to be as much about the Gospel as preaching,” she says. “Not just in content, but in the way that we interact with one another and the way we make things happen. Not only what I contribute but how I contribute – that, too, is the Gospel. That is as much about Christ as preaching or sharing my testimony.

“So keep talking about Jesus, keep loving people who disagree with you and hurt you, and be attentive to God in Scripture, in prayer and in people – to listen to what God is saying and teaching, to learn and be open to the work of God.

“For most people, being a disciple has to be lived out in a context which may not look like it has anything to do with the kingdom of God. It is important that I recognise the stuff of people’s everyday life, and that I learn from them how to be a follower of Jesus.”

Bishop Libby has been a priest all her working life. She first began attending church with a friend when she was 11. She met her husband George at university and, after theological training at Durham, they became one of the first couples to be ordained into the ministry of the Church of England together in 1994.

With the births of their children, Connie and Benedict, Bishop Libby and her husband shared parental responsibility and public ministry. When they moved to the Diocese of Chester, George was a vicar and the family lived in the vicarage while Libby held posts elsewhere. Then the roles were reversed when she took on the post of vicar of St Peter’s Hale and St Elizabeth’s Ashley, and George became a co-ordinating chaplain at Manchester Airport.

“I am committed to the Church,” she says. “This is where God has asked me to be. But that doesn’t overrule the primary call to be a follower of Jesus and to share the good news of Jesus.

“I work so that can be done through the Church, but I recognise that we can fail. We have a responsibility in not becoming a stumbling block or barrier to people hearing about Jesus. The Holy Spirit works where it will and sometimes it works around us – and thank God for that!

“I bring all my life experience to my ministry as a vicar and as a parent and as a wife and a friend,” she says. “And that is all I can do. I can only be who I am.”

But being able to share her story has allowed Bishop Libby to bring the news of Jesus to places where it is not normally received, she says. “It has been a real opportunity, so one of the things that has been important in these first three years has been working out when to say yes to things that fit with my vocation, gifts and my passion.

She has a lifelong love of dance, and was especially thrilled at being asked to write programme notes for the Royal Ballet. “I have a particular enjoyment of the arts,” she says. “To work with artists and poets and playwrights is something I find really interesting – and the fact that they are interested in engaging with me. It has been a delight to respond to that, including the slightly surreal privilege of having my portrait painted and a sculpture made.”

Her interests include following Manchester United, solving cryptic crosswords and learning to play the saxophone. She rowed at university and keeps fit now with occasional Pilates classes and time on indoor fitness machines in the back room of the family home.

“My life is very full but I try to avoid the language of being busy,” she says. “Busy sounds like it’s a problem and that I don’t have time for ‘you’. Life in fullness seems much more constructive.”

When she was first appointed, Bishop Libby was subjected to a lot of ‘noise’ on social media. “Some of that was really personal and unpleasant and just unkind,” she says. Her response has been not to engage in Twitter or Facebook, and to be rooted in her family and friends, appreciating their support and encouragement. But, she says, “the public face of it – these things are first world problems. It helps to have perspective. I feel extraordinarily rich in all sorts of ways. My identity and hope does not rest in other people’s opinions of me.”

But she does acknowledge that her voice does count and that she is called on to comment on issues affecting the Church, society and the world.

“Although I have had a lot of attention because of the place I happen to have held in the Church, and therefore the nation’s life and history, I am not an attention seeker,” she says. “I don’t go out of my way to be the voice that is being heard. But I do recognise there are times when I do need to speak and I seek to do so with integrity and humility.”

There are also occasions when it is right for someone else to be heard. “It has become part of my life to make those judgements and be at ease with that. I don’t have to feel compelled to speak all the time, nor do I need to feel overwhelmed if people don’t like what I have to say.

“It’s been three years of extraordinary gifts,” she says looking back. “There’s a very profound sense that being a bishop, being the Bishop of Stockport, is the way that God is asking me to be faithful to Jesus at this moment, and that is an extraordinarily good place to be.

“I am very, very grateful that my call as a disciple and my vocation as a minister of the Church of God has coincided. That is a real gift.”