How chocolate is changing women’s lives 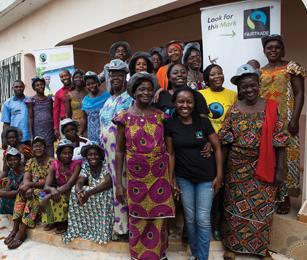 It is a common saying in Africa that to train a man is to train an individual, but to train a woman is to train a whole village. Fairtrade is working with women in coffee and cocoa growing communities to empower, educate and inspire women, so that they can go on to be leaders and change conditions for a whole new generation in the future.

In coffee growing regions in Kenya women carry out 70% of labour on the family farm, but in many cases it is still the men who own the coffee bushes, receive the training, are members of the co-operative and, crucially, receive payment for the coffee beans. Women have no money of their own and therefore little independence or ability to change their destiny. Women are shut out of the decision making process both in the household and the co-operative.

Traditionally, a woman will first help out on her father’s farm, and then she will work on her husband’s farm when she is married. She will often work 12 hours a day, tending the coffee bushes and attending to household duties. This includes fetching firewood, cooking and cleaning. She has no time of her own and no property or money of her own. Because women do not own their own property, they cannot sell their own coffee, and they cannot become a member of the co-operative.

But one pioneering programme in Kenya is working to change this.

Breaking with tradition, 330 women from Kabng’etuny Women in Coffee Association and 150 women from Kapkiyai Women in Coffee Association were gifted coffee bushes from their husbands to lovingly tend into a success story. Following the inspirational move of the Co-operative’s Chairman, Samson Koskei, who took the first steps to gift coffee bushes, these women were given a shot at shaping their own futures. Through ‘asset transfer’ of coffee bush ownership from men to their female partners, women can become full co-operative members and control the income generated from their coffee.

The two co-operatives are now producing the first coffee grown by women from Kenya. The impact of giving these women a chance is clear: it is seen in the quality of the plants they grow, their social involvement in the community and especially in the glow on their faces.

The Growing Women in Coffee project is driven by the women involved. In the same way that the Fairtrade Premium (a fund given to the Fairtrade co-operative to invest in improvement projects) is invested in initiatives decided by the farmers, the women in the coffee project sit down and talk about how they can work together to change gender inequalities on their farms. By driving change themselves, they are in control of their own futures and they are more able to open up new areas essential for educating women and improving lives.

Subsequently there have been new projects looking at diversity and education on how to gain a secondary income from their smallholdings. Becoming a member of their co-operative means they can learn about food security and cover crops, as well as how to protect their products from the impact of climate change.

The Fairtrade Foundation is supporting these improvements on coffee farms and looking to extend the project into more areas around the world, to create an even bigger impact on the thousands of women farmers around the world.

It’s a similar story among cocoa producers. Across the continent, West Africa is the largest cocoa producing area in the world – especially the Côte d’Ivoire, which accounts for 43% of global cocoa output. The cocoa sector employs around four million people, which is one in six of the population. Yet shockingly, more than half of all cocoa farmers live below the poverty line.

There are not many job opportunities for female cocoa farmers living in the Côte D’Ivoire. Toiling on their husbands’ farms, taking care of their children and putting food on the table means that many women don’t often have the time, support or energy to do more. Like in coffee farms, women are often the workers and play an important role in growing a good crop. With support, women can change the futures of the industry.

In 2017 the Women’s School of Leadership was launched, setup through a partnership of the Fairtrade Foundation, Compass Group UK & Ireland and the Co-op. It supports female farmers to generate more income through smarter farming, and gives them the confidence and skills to set up businesses and be leaders in the Fairtrade certified cocoa co-operatives they belong to, as well as in their local communities.

In May 2017 the first group of 19 women and three men joined the school. It’s a one-year course, comprising four sessions of three days, training and an ongoing mentorship programme in their village. Through the programme, the students are supported to start their own business. The course delivers training in subjects including negotiation skills, managing finances and human rights.

Fast forward and the impact is evident. For example, Madeline, a 40-year-old cocoa farmer with three children, felt so empowered after the course that she conquered her fear of public speaking, stood up in front of her fellow farmers at a co-operative meeting and spoke about the importance of promoting the rights of women. Seeing her passion, the co-operative appointed her to an official role, allowing her the opportunity to promote women’s rights further in her community.

Or take Therese, whose father died when she was young. Her uncle received the land that should have rightfully been hers. In rural Côte D’Ivoire, it remains difficult for a woman to inherit or own her own land. Women often leave school and marry young, many under 18.

Following her attendance at the training, Therese went to her uncle and asked for her plot of land back. He refused. So she went to the local sub-prefect who arbitrated on such issues, and he made a decision in her favour. She got her land back, allowing her to have her own farm and make her own money, helping her and her family.

Sadly there is still a way to go, but Fairtrade can help. It’s an alternative approach to conventional trade, and is based on a partnership between producers and consumers. When farmers can sell on Fairtrade terms, it provides them with a better deal and improved terms of trade. So by choosing Fairtrade products, you can help increase the market for Fairtrade, which means more farmers can sell on Fairtrade terms and more projects to empower women will be possible. Fairtrade offers consumers a powerful way to give farmers and workers a chance, and to reduce poverty through their everyday shopping.