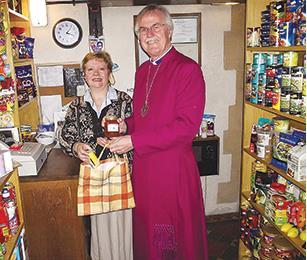 What would you do for your community if you had £10,000? That’s the competition question churchwarden Irene Allen asked herself when it was posed by a local magazine. Entrants with the best answers would receive £10,000 to help make their dream a reality. Irene, who thought of herself as “one of those people who don’t win competitions” was shocked and delighted to learn that hers was among the winning entries. As a result, Heavenly Supplies opened its doors, five years ago, at St Giles’ Church in Langford, Essex.

Irene’s idea was to open a small shop in the church. There had been no village shops in Langford for 20 years, and the community badly needed a local facility where they could buy basic supplies.

“The church seemed to be the ideal place,” says Irene, “especially since the building has to be locked when it’s not in use. Opening the shop meant the church building could be available more often.”

Heavenly Supplies was the working title for Irene’s new project. It seemed appropriate for a shop within a church, and the name stuck – but Irene still has to correct people who think she only sells Bibles.

Before the new shop could go ahead, a number of permissions had to be sought from the Church of England, the local authority, English Heritage and other organisations. Permission also had to be sought when a local landowner offered the bottom of his field for a car park. The land, next to the churchyard at the back of St Giles, can take up to 12 cars – more than that and the landowner would have to pay rates on it.

When Irene won the competition, there was no vicar available to approve or disapprove of the shop idea. But when the new vicar arrived, he was very happy with the plan.

It was decided that nothing in the church would be changed. “If the shop didn’t take off, then we could put everything back the way it was,” says Irene. All of the shelving was made by a local joiner, who asked only for the cost of the materials. He fitted them to make sure they would be “stand alone”.

But Heavenly Supplies did take off! And now it is open every day from 10am until noon. The usual grocery items are stocked: tinned vegetables, soup, beans, flour and sugar. In addition, there are greeting cards, local free-range eggs and local honey. Heavenly Supplies offers locally-grown vegetables, and, in the summer months, most of these are donated to the project. “We are not here to make a profit,” says Irene, “so we can keep prices very low by buying when things are cheaper and shopping around. Our prices are usually lower or equivalent to the local supermarkets.

“We also offer seasonal items at Christmas, Easter and other times. We have plant sales and craft sales occasionally during the year and I’m always on the lookout for quirky things that you can’t buy in local shops. Teddy Bear pasta was something I found in a shop at Scotch Corner, so I buy lots of that whenever I go to Scotland: parents find that their children prefer it to ordinary pasta! We have a couple of customers who are delighted that we will get things in especially for them. But to my way of thinking, that is what it’s all about.”

At the moment, there are five regular volunteers including Irene, who staff the shop. “We try to ensure that there are two of us on for security and for company, but that doesn’t always work,” Irene comments. “Most of the team are retired. I work full-time, but the charity I work for allows me to work from home, two days a week. So I make up the time in the evening on the days I work in the shop.”

The volunteers are all members of St Giles. Young people from the church work during school holidays and at weekends if the shop is short-staffed. Irene hopes that as her staff gets older and come to the point where they can no longer help in the shop, others will come forward to take their place.

Normally, Irene works in the shop six hours a week, or sometimes more if other staff are unavailable. She buys stock when she does her own shopping, and has a policy that she won’t stock anything that she wouldn’t buy herself.

The kettle is always on at Heavenly Supplies and everyone who comes in is offered a cup of tea or coffee. Although a sign makes it clear that the car park is there solely for customers, sometimes other people use it. On one such occasion, a shop volunteer took a cup of coffee out to a man who had parked there and was using his mobile phone. He was so taken aback that he emptied all the money out of his pocket and onto the tray when he’d finished!

To mark the shop’s one-year anniversary, a special evening event was planned. Everyone in the village was given a £5 voucher to be spent on the anniversary evening, as there was still money available from the competition prize. Local product ‘tasters’ were offered, as well as a complimentary glass of wine. Those who used their vouchers spent far more than the £5 face value, and people came into the shop who had either been too shy to cross the threshold before, or who couldn’t come during the day.

To those interested in taking on a similar project, Irene urges, “Keep a sense of humour! Don’t give up, but be prepared to be irritated, aggravated, frustrated and sometimes aghast at what hoops you are asked to jump through.

“It has been a long journey,” she says, “but now I can see that it is very successful. It serves a need in a small village and makes the church a much more accessible place.”