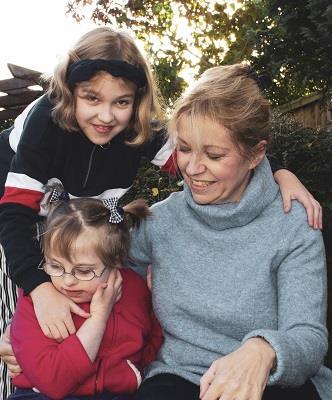 Attending her twelve-week pregnancy scan was just routine so far as Alison Morley was concerned until she noticed the heightened tension in the room, the technician staring fixedly at the screen. Something was obviously wrong. A consultant was called and as soon as she saw his face, she knew it was bad news.

Returning for an appointment to discuss in more depth what was going on, she and her husband Martin listened numbly as the consultant’s words dealt them blow after blow. An extra chromosome indicated some kind of syndrome like Edward’s or Down’s – their longed-for baby was ‘abnormal’. The baby would probably die in utero. If she survived, she would have serious heart problems.

Alison was broken-hearted, but she turned to God in prayer: “I’ve already had my tough times, Lord. You know it took ten years to conceive Miriam and that we both nearly died at 29 weeks when all my internal organs started shutting down. Falling pregnant so quickly this time felt like a gift, fulfilling our cherished dreams of family life, but now this? Lord, what on earth are you doing?”

Alison was devastated by the bleak prognosis, but it was still a shock when the first thing the genetic midwife handed her was a leaflet on termination. It seemed the world believed the child she was carrying had no value at all, but what did God say about this little life? “I told her abortion was not an option for us, but inside I was very, very scared. Would I be able to love this child when the very words ‘Down’s syndrome’ made me want to run away? It was a very dark time, but I clung on to the fact that God had proved his faithfulness to us in the past and would do so again.”

As Alison’s pregnancy progressed, scan results showed no sign of heart defects and Alison began to hope that perhaps the initial diagnosis was wrong, but when Hazel was born in September 2011 the truth had to be faced. Her beautiful little daughter had Down’s syndrome (DS). It was a moment of bitter-sweetness as she looked into the incubator at the child she had never imagined would be part of God’s plan for her. Frail and very poorly, Hazel was fighting for her life. Alison had been struggling so much with prejudice and fear that she was really worried she might hate or reject a DS baby. What actually happened was quite unexpected. Alison fell head-over-heels in love with her new little daughter.

There was still much to work through. One of the hardest things for Alison was how people responded to Hazel’s birth. When Miriam was born everybody cooed over her and congratulated Alison, whereas Hazel’s arrival was seen as a tragedy, something Alison wrote about movingly in her blog Downright Joy:

“Words people said when my first baby was born:
Congratulations!
She’s beautiful
She’s got your eyes…
So many words, so many clichés. So many ways to express joy.

“Words people said when my second baby was born:
I’m so sorry
So few words. Eyes averted. Hushed conversations. So many ways to express sorrow…”

Hazel was so ill that she had to be transferred to a neonatal intensive care unit 40 miles away. It was weeks before she finally arrived home, and Alison felt increasingly overwhelmed as she faced the multitude of tasks needed to care for her sick daughter. “I just couldn’t cope and Martin had to call out our GP. He was marvellous and said something I will never forget. He told me that I would meet some amazing people and that it would be an incredible journey, but little did I know that the most amazing person I met would be Hazel herself.”

THINGS HAZEL HAS TAUGHT US

Hazel is now eight years old. She is non-verbal, still largely tube-fed and didn’t start walking till she was seven. To many people such a life seems severely limited. Alison was often asked, “But didn’t you take the test?”, as if someone like Hazel could only be a mistake – that nobody in their right minds would ever choose to have a child like her. Sadly, 90 per cent of pregnancies where Down’s syndrome is detected are aborted and, shockingly, termination can be legally performed right up to birth. With improved Non-Invasive Prenatal Testing (NIPT) screening that percentage is likely to increase still further, a development the DS community are fighting against through the wonderful Don’t Screen Us Out campaign.

There is a very real possibility that DS could be eradicated altogether, and yet, as DS parents have discovered, such children are infinitely precious. An increasing number of DS children/adults are making their mark on society, such as actress Lauren Potter (Becky Jackson in Glee), professional model Madeline Stuart, gymnast Chelsea Werner and public speaker and English Channel swimmer, Karen Gaffney.

When Alison and Martin first found out their baby might have DS they wept in each other’s arms, devastated by the news, and this inspired Alison to write her blog to encourage others feeling scared at the thought of raising a DS child. As Alison shares tender snapshots of life with Hazel, we get to know a little girl bursting with personality who often wakes up laughing, stops to turn a leaf over and over in her hands entranced by its beauty or lays a gentle hand on the knee of another wheelchair user who needs the comfort of a loving touch.

So, should Hazel be an object of pity? Alison doesn’t think so. “She doesn’t have an identity crisis. She knows exactly who she is in a way I can only envy. She’s more in touch with the feelings of those around her than anyone else I know. At the same time she fully inhabits every moment so that suddenly you are seeing the world through Hazel’s eyes – a place full of magic and wonder. She has brought such joy into our lives that we wouldn’t have it any other way – she truly is God’s gift.”

Alison writes a blog on ‘Discovering joy in unexpected places – a journey into Down’s syndrome, Dyspraxia and Autism’ at downrightjoy.com.