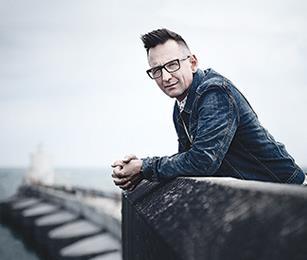 Martin Smith is a Grammy-nominated, Dove Award-winning worship leader, songwriter and former lead singer of the band Delirious? He has written some of the Church’s best-loved songs including What a Friend I’ve Found, I Could Sing of Your Love Forever and History Maker, and his second solo album God’s Great Dance Floor – Step 02 is out now. Martin is married to Anna and they have six children. He talks to Ali Herbert about Christmas, life after Delirious? and what’s next ...

What was your experience of church as you were growing up?

I was born in Woodford Green in Essex. Mum and Dad were Christians and we were members of the local Brethren church that had a big emphasis on the Word of God and the cross. I enjoyed church – at that age it’s all about friends: being in a good youth group, going on youth camps – and there was a lot of fun. And then, of course, I went through the teenage stuff at school, of being the only kid in my class who went to church and being hugely embarrassed by it. But at eight years old I had a conviction that this was how I wanted to live my life. All in all, it was a conviction that I’ve held to through my life.

Do you have memories of childhood Christmases?

I’m one of four children, so it was always busy with lots of relations. My Mum’s one of five and my Dad’s one of five, and they were very sociable people so our house was always open to anybody and everybody. We always seemed to have some waif or stray popping in to Christmas lunch – that was the sort of house it was, which is great – it’s how we try to do our life now.

What was your favourite Christmas present?

A West Ham football kit! I think I was ten years old. I remember unwrapping it and seeing the claret and blue colours. And that’s what I wore for about a year. You know when boys of that age come home from school and they wear it, then they wear it Saturday and then wear it to church as well …

Can you tell us a little bit about how your band Delirious? started?

It was 1992 and the guys at Arun Community church in Littlehampton started a monthly youth event on a Sunday night. The purpose was to be the youth group on steroids! For people to invite all their friends, turn the lights down and do it in a cool little venue. I was trying to help with the music – we’d call it leading worship now, but I’m not sure you could call it that then. It was very sketchy and unimpressive, but we just knew that God was with us.

We started with 70 kids and each month it grew and grew. It was a really simple formula – just lots of music and worship, read the Gospel and a chance for the kids to give their lives to Jesus. We didn’t have the resources or the gifting to have a big multi-media show so it was very low-key, but it grew. And for five and a half years we did that every month.

What was the best thing about being in the band?

I think we had a vision to bring change and that people all round the world would be touched by it. We went to most countries in the world and this music would somehow travel before us. We’d turn up and people would know the songs. It was a total God thing.

You’ve been travelling and touring a lot over the years – has that been a big challenge for you as a family?

Being away is the best of times and worst of times. I love what I do and when I’m at a place I give it everything, but the leaving bit becomes harder and harder. There was a lot of pressure on our wives back at home, but it seems there was a lot of grace for it – and that doesn’t mean it all went perfectly because there were some bumps in the road, but we knew we had a job to do and we just went for it.

What have your children most enjoyed?

We used to take them on the road, hire a bus and go across America – and they would say those were their favourite ever holidays. They were with us, they were waking up in a new city, they were involved in it. Now that they’re a bit older they’re able to be a bit more involved. Ellie’s singing a little bit, Noah’s doing a bit of drumming. We don’t force it – it’s not a shiny Christian family band! But at the same time if I see something in them, then let’s get them singing and leading a bit. I was 16 when I was asked to lead for the very first time in my youth group – and now my daughter Ellie is 16.

The band came to an end four years ago – was that difficult?

Yes, five families, 17 children between us and suddenly I’m the lead singer going, “I don’t want to do this any more, I’m done.” I just knew I couldn’t carry on. So it was a hard season to navigate together because some wanted to continue, it wasn’t a unanimous decision. But I think that a lot of good things have come out of it and God clearly had a plan for each person’s life. I knew even more so, when I told Anna about my decision and she almost fell over and said, “Wow, amazing.” I don’t think either of us realised what we were carrying and so it was a good decision for us a family.

So what happened next?

We did our last gig in November 2009. And then there was a huge void. What do you do? Pretty much all our adult lives this is what we’d done. So there was a process of letting go, which isn’t easy. A little bit of shock and grieving, and realising you can’t really go back and it may never be the same again. But very quickly as a family we came together and I remember getting to my seventh Saturday without being away and thinking, “Wow, this is just incredible” – so there were a lot of up sides to it.

What are you working on now?

After that period I had a lot more time on my hands. So I was reading a bit more, I was riding my bike a bit more, giving my soul time to really recover – which was the advice I was given. But in the midst of it I started writing again and all these new songs started coming. I was writing with guys like Tim Hughes, Chris Tomlin, Nick Herbert – but I was writing without a deadline or a publisher, so that was quite releasing and I think in all that process I started to find my voice again.

Is there a song that is particularly personal to you?

They’re all quite personal. The song Back to the Start is about Luke 1 and the Prodigal Son story – but the more I sing it the more I realise that God’s been so kind, because I’ve found my way back.

As you travel around the world is there a sense that God is saying something specific to the Church right now?

I think it’s got something to do with getting ready to welcome everybody home. Not just the classic white, middle-class church; but we have to create an environment where everybody is welcome, from the homeless dude, to all the extremes. And to be a place where everybody’s comfortable, it’s got to be family, so it doesn’t have to be so professional. It just has to have the feel where people love each other – I think that’s the most powerful thing. And, of course, it can’t be religious – it’s not a funeral, it’s got to be a party; we’re celebrating what God has done!

What will you be doing this Christmas?

We’ve just moved into our new house in Brighton and it’s all very exciting, so we’ve got Anna’s parents coming on Christmas Day and my family Boxing Day – there’s going to be a lot going on.

I don’t know if we’ve worked it out yet – and of all people I wouldn’t know the answer!

Is there anything you’re particularly hoping for this Christmas?

We’ve been having building work done so a house free of dust – that would be perfect for me! Christmas tree up and no dust anywhere – I’m easily pleased …

And what’s coming up next year for you?

Being here in Brighton, settling everybody down and using the time we’ve got to stabilise it all a little bit. I want to get back to some more writing in 2014 and recording in 2015. A year just letting the songs come. That’s the plan.

+ To read Martin’s blog, see his forthcoming tour dates or to order his new album go to martinsmith.tv/home
+ Martin’s wife Anna also has a book available on their journey together called Meet Mrs Smith: My Adventures with Six Kids, One Rockstar Husband, and a Heart to Fight Poverty published by David C. Cook.