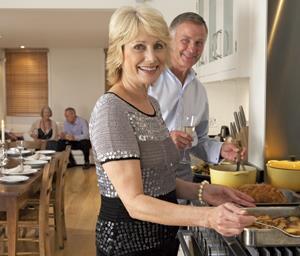 How to host a dinner party

There’s no better way of getting to know people than over a meal. Michele Morrison shares her tips for bringing people together and unlocking their stories

I went totally over the top for the first dinner party we gave as a married couple. I was new to Scotland and knew nobody, so I cooked to impress my husband Don’s friends. I slaved away for hours, even baking French bread, and then was so tired I could barely speak! I’ve learned. While you want to honour your guests with the best you can offer, simple food and convivial hosts make a more winning combination than cordon bleu cooking and an atmosphere of brooding grumpiness. “Offer hospitality to one another without grumbling” (1 Peter 4:9).

Entertaining isn’t about fancy food or an amazing centrepiece, though these may be things you enjoy preparing; it’s about the welcome, the laughter, and the sharing of that precious commodity – time.

A meal creates time and a space for people to mingle and share their thoughts and experiences. The best dinner parties pull back the curtain and expose some of the quiet corners of friends’ lives and experiences which facilitate connections at a deeper level. But how do you enable meaningful conversations?

If your guests are primarily neighbours who you speak to over the back fence, parents you shelter with outside the school gate, or churchgoers who share a pew with you, it’s fun to take the relationships to a new level. Forget talking about how your kids, or your carrots are doing and be bold. Throw a themed party. Ask people to come prepared to share a favourite piece of music, poetry or prose, and you will be in for a fascinating evening.

Don and I have hosted many such parties, and have found them richly rewarding in terms of stimulating and often thoughtful conversation. Be prepared for laughter, tears, and a wide variety of tastes.

Several times, we’ve invited people to bring a CD of a favourite piece of music to share. One neighbour played us a recording of a piece which her mum, a church organist, had played. We didn’t know she had any church connection, but she regaled us with her childhood church memories. Her husband shared The House of the Rising Sun by the Animals – a 60s hit with which most of us were familiar. As he talked about it, we learned that he was a ‘closet’ guitar player who once dreamt of pop stardom. When their son, a friend of one of our boys, went on to study guitar and music in Southampton rather than going to university, we could understand where that impulse had originated.

A good friend we’d known for years, through church and children, surprised us with his favourite Bob Dylan song. He related some sad associations in his early adult life which rendered the lyrics so meaningful to him.

At one party I shared a recording of a French/Greek artist called Georges Moustaki. Acoustic guitar, deep resonant cello, mellow French voice crooning, “Viens, je suis la. Je n’attends que toi. Tout est possible; tout est permis.” Oh, it takes me back. “Come on, I’m here. I’m just waiting for you. Everything’s possible; everything’s OK.” Not many people I know now would associate me with enjoying such a song, but it’s the whole package for me – the beautiful French language, the album cover, the relaxed beat. It reminds me of an innocent, carefree summer spent with my sister, hitch-hiking for three months around Europe; a precious summer filled with experiences and joys made all the more precious to me because of my sister’s early death. That drew back a curtain on an era of my life few knew about.

At poetry parties, we laughed at limericks and sniffed at sonnets. We heard things we knew and were introduced to new material. And we glimpsed some of the interior wallpaper of our guests’ personalities.

A favourite poem I shared is Keats’ Ode to a Nightingale, in which there’s a line I didn’t fully appreciate at university. A few years later, having moved halfway round the world to Scotland, the lines alluding to the sad heart of Ruth who, sick for home, stood in tears amidst the alien corn, often seemed heartbreakingly close to my own experience. Keats’ ruminations about death make it appear appealing by comparison with the tragedies of life. A deep discussion ensued.

It’s fiendishly difficult to choose a favourite bit of prose, and to identify a passage succinct enough to give a flavour of the rest of the writing. But it was so much fun at prose parties to hear the rich range from classical literature to popular fiction to non-fiction by authors like Bill Bryson.

One time, my choice was from The Brothers Karamazov by Dostoyevsky. The Grand Inquisitor is a chapter of the book which has stayed with me for over half my life. An encounter between Jesus Christ and the Grand Inquisitor during the Spanish Inquisition is an absolutely fascinating device for highlighting the opposite approaches of God and his enemy, the devil to mankind. Which brings humanity more happiness? To allow them freedom even while acknowledging their weakness and tendency to sin and therefore need of a saviour, or to steal away all free will which, though enslaving them, yet allows them to find ‘happiness’ within the security of rigid boundaries? An interesting discussion followed.

If you plan a dinner party with only Christian friends, you can stipulate favourite Christian writing, either fiction or non-fiction. Many Christian books contain thoughts which are better understood, accepted or rejected, when discussed with other believers. But a word of caution, because most people can’t pick just one song, or one poem, or one bit of prose, be careful how many you invite, unless you’re prepared to be up most of the night!

We attended a party once where guests were asked who they would invite to sit in the empty chair and eat with us, if they could invite anyone at all (except Jesus). Answers ranged from Don’s grandfather, who had served as engineer on the relief ship, The Morning, despatched to re-supply Scott’s Antarctic expedition when The Discovery became trapped in the ice in 1903, to historical figures like Shakespeare, St Paul and Oliver Cromwell.

Life is serious and can be heavy. Small talk revolving round who you are, what you do, or what the children are up to, can be tedious and doesn’t make for a refreshing, stimulating evening. You want to find something that will excite your guests’ imaginations and prompt unexpected and unusual discussions. Perhaps a more 21st century idea would be to share favourite websites, YouTube clips, Facebook pages, or tweets.

If the austerity budget is pinching so hard you can’t contemplate a dinner party at all, why not have a pot luck supper and invite people to bring a favourite dish? Stories and associations with certain foods could be the key to unlocking experiences which have helped to shape people’s personalities and give a clue to where they’re coming from. Paul checked out the local culture and way of thinking in each new city, and tailored his message accordingly.

Sprinkle the sharing moments throughout the evening, beginning as soon as the guests have all gathered and before you even sit down at the dinner table. Small bites give people time to chew over each others’ choices. Giving people the time and space to get to know each other is richly rewarding. Try it and see!

+ Michele Morrison is a freelance writer based in Banchory