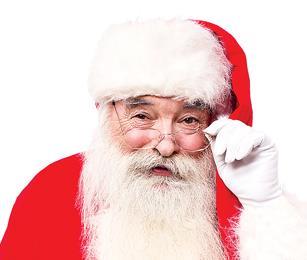 What do I tell my children about Father Christmas?

It’s a dilemma facing many parents. Trisha Foote explains how they have tackled this question in her family
I can still recall, as a child, that feeling when my eyes were tightly shut and I was pretending to be asleep. I heard footsteps in my bedroom, a rustle of paper and a creak of the door, then silence. I savoured the joy and excitement of knowing that Father Christmas had visited me again.

Then comes the inevitable time when all is revealed and the truth dawns on you. He’s not real. I don’t remember being devastated, but I am sure that Christmas had lost a bit of its sparkle after that, until I had that realisation that Jesus was real, and then the season took on a whole new meaning for me.

My mum told me recently that her mother had told her that Jesus was real and that Father Christmas was based on St Nicholas, a kind man who gave out gifts to the poor. She had told me and my sisters the same, and said we seemed happy with that.

After my children were born, I wanted them to feel the same feelings of joy and wonder that I remembered, but I felt it was important for them to know that the season was about the birth of Jesus, the Saviour of the world.

I have always had a nativity scene and made this a central part of our decorations. I read them the Bible verses about Jesus’ birth: Luke 2:1–20, and Isaiah 9:6–7: “For to us a child is born, to us a son is given, and the government will be on his shoulders. And he will be called Wonderful Counsellor, Mighty God, Everlasting Father, Prince of Peace.”

Then came the story of Father Christmas, who would come to our house in the middle of the night and put stockings at the bottom of their beds and presents under the tree. The excitement about him coming was part of the whole Christmas package with the tree, carols, our Christmas service and food. St Nicholas was a good Christian man, and a good role model, and so is Jesus. It is a good idea to centre on that theme and this will help when the inevitable moment comes and one realises that all is not as it seems.

The important thing for me to convey to my children was that Christmas was all about Jesus, that he was real and that everything else was a part of the celebrations. One year, I went to Midnight Mass and so the next day we didn’t go to church, and my son said: “It doesn’t feel like Christmas if we don’t go to church.” That’s how it should be, I believe, that Jesus and worshipping him come first and everything else afterwards.

The history of St Nicholas
So who actually is this guy who makes his way into traditions of countries around the world? It is thought he was Saint Nicholas, Bishop of Myra in Turkey, who lived in the third century.

It was said that he was a kind and generous Christian who became the patron saint of children and sailors. He not only helped those in need but was also persecuted.

He lived in the time of the Roman emperor Diocletian, who was known for his severe persecution of Christians and was extremely cruel. Nicholas was put into prison for a time for refusing to deny that Jesus was Lord. When heresy came into the church, he refused to comply and was told to leave the church.

His connection with Father Christmas is born out of a legend that he helped a poor father who had three daughters. They were due to be taken to a brothel because he could not afford a dowry for them.

Bishop Nicholas heard about this and decided to help the man by throwing three bags of gold through his window (or down his chimney into the girls’ stockings, depending on which version you are reading), therefore saving the girls from a dreadful fate and allowing them to marry. From this we get the tradition of a kindly gentleman coming down the chimney and delivering gifts to our children.