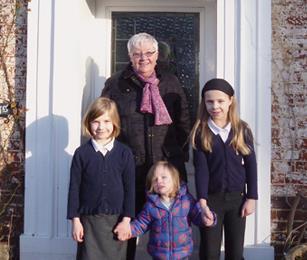 Could you live with three generations under one roof?

Grandparents, parents and children living together in one house is becoming more and more common. For Marion Andrews, it was the answer to a prayer ...

It was interesting to see how people reacted when I told them of my plans. “You’re moving in with your daughter and family? Well, say goodbye to peace; you’ll be an on-site babysitter!” Those of a similar age to my daughter were less outspoken, but it didn’t take too much imagination to read their thoughts as their eyes widened. “Have my mother come to live with me? I don’t think so.”

It was my daughter who first floated the idea. “Mum, you know my business is expanding. My office is too small, so we are thinking of moving. Have you ever considered pooling our resources and buying a house for us, you and my business?”
John, my husband, had died very suddenly and unexpectedly about 18 months previously. The rest of the family had moved out and were leading independent lives. They had all been very kind and supportive, but the bottom line was that I was on my own, and lonely. I had never really lived alone before and I hated it.

The family house was now not only too big, it needed maintenance and the garden needed someone to care for it. My husband had been handyman/decorator and gardener before. Now it was down to me. Determined not to be beaten, I tried. But my decorating skills, never very good, didn’t improve and each smudged skirting board reminded me just how much John would have hated it and how much I missed him.

I was better in the garden. Listening to my favourite songs through my iPod, I would attack the weeds with vigour, but the garden was big and previously John and I worked together. It was one more reminder of what I had lost.

I think it seemed obvious to everyone except me that I needed to downsize. Sensible as it was, for me it was an emotional nightmare. This house had seen the children grow and develop. There had been Christmases, birthdays, graduations, weddings, first boyfriends, the birth of grandchildren ... the list was extensive. Memories lingered in each corner. How could I just leave it and move to a bungalow with a small garden and two bedrooms? Were big family occasions to be relegated to memory too, as I would be unable to accommodate them? So I had procrastinated.

When my daughter dropped her question into the conversation, we were travelling together to a conference in the Lake District. “Think about it, mum,” she’d said. “Don’t answer now. I know it’s a big thing.”

To say “I thought about it” was an understatement. I considered every possible aspect. Would moving in with one child cause sibling jealousy? How could I ensure it would not become a financial nightmare if anything happened to me? Family friction regarding finances and inheritance are the stuff of ‘soaps’ or The Jeremy Kyle Show; could I move and still ensure all my children were treated fairly? Would it work or would my daughter hate living with me? What about my son-in-law? The grandchildren were easier. I had looked after them one day a week since they were tiny and they were a joy. They loved ‘Grandma Days‘ as I did, but if we lived together, would our relationship change?

As I prayed through my questions, a memory slipped into my mind. I consider myself to be someone who understands bereavement and loss, both personally and from my experience as a staff nurse in our city’s hospice. I believed that God was there with me in the pain of losing a lifetime partner, but some days the pain seemed almost too much to bear.
I remembered being on a pilgrimage to Israel with a wonderful Christian group and we were visiting the Church of the Holy Sepulchre, which is believed to be the site of Jesus’ crucifixion. The emotions surrounding the place were beyond any expectations and, in the darkened church, smelling of incense and policed by temple guards, I could hear pilgrims crying and wailing as they considered Christ’s sacrifice.

One of the leaders of our group was sitting in a dark corner away from the crowds and had offered to pray with anyone. Several people had taken up her offer and, when my turn came, I was horrified to find myself overcome with the pain of John’s death. ”Why did he have to die?” I wept. Madeleine was lovely and held me as I wept, praying as she did so. Afterwards, when I had recovered a little, she told me she had felt led to pray that I would “no longer feel alone”. Was Jane’s question part of the answer to that prayer? I didn’t know, but the thought gave me peace.

I took a first, tentative step forward and floated the idea to my second daughter. “You know Jane is trying to expand her business. They’re looking for a suitable house?” Susie nodded. “Well,” I rushed on, “she has suggested we pool our resources. Find somewhere big enough for their family, the business and me.”

I stopped, feeling anxious and waited for the response, but instead of questions and anxiety, Susie was smiling. “Mum, if that’s what you want, go for it!” She took my hand, “I worry about you being alone. I hate to think of you in that big house without dad. It could be good if you could make it work.” We sometimes underestimate our children.

My son’s reaction was more practical and involved the financial safeguards needed to ensure, in the case of my death, Jane would not be landed with a huge bill to buy off my share of the house. This was later resolved by taking out an insurance policy to cover that eventuality.

The only decision left seemed to be mine. Was this what I wanted? And I soon realised that this plan could become a reality and it was something I wanted very much.

Like most plans, not everything went smoothly. We put our houses on the market and Jane’s sold immediately, on the understanding that her buyer had possession in eight weeks. My sale, however, fell through when the buyer was made redundant. So Jane, her husband, two children, two cats, most of her furniture and her office moved in with me.

Then Jane discovered she was pregnant and her husband lost his job. It was a time for taking deep breaths and not losing sight of the bigger picture. It wasn’t always easy and I confess to feeling concerned and anxious at times, but ultimately everything fell into place. We moved in on a cold Monday in November and my third granddaughter was born two days later.

Two years have passed and I smile as I remember the angst of those early days. The whole family are pleased with the outcome. The house, built in 1690, has provided my daughter and her husband/business partner with a fully functioning office (although some building work was required). The family have their own living space, complete with inglenook fireplace and beams, and I am happily installed in my own ‘bit on the side’, which was once a gardener’s living quarters. This gives me my own lounge, kitchen, bedroom, guest bedroom/study and bathroom. I have an independent, active life and am no longer lonely. I love the close relationship I have with my gorgeous grandchildren.

It would be wrong to say there are no downsides. Living in close proximity is bound to expose some tensions and it is important we are honest, respecting each other’s living space and timetables. But our house is large enough to cater for us all and has the added bonus of providing us with a ‘Gathering Place’ for extended families.

When my husband died, it felt as if my world had ended and although I still miss him very much, I cannot underestimate God’s continued loving care for me. Stuart Townend’s song There is a Hope says: “There is a hope that stands the test of time … A consolation strong against despair, that when the world has plunged me in its deepest pit, I find the Saviour there!” I should like to add my own ‘Amen’ to these words.