Equipping the next generation 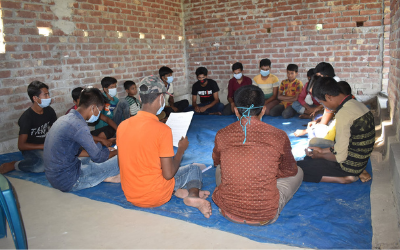 In the May issue of Woman Alive magazine, I asked whose responsibility it is to support our teenagers and young people when confronted with highly sexualised, explicitly eroticised and openly pornographic content that is constantly thrown at them online and on TV.

It’s a big question and was asked so that we might address the issue of how young boys in particular might learn respect for girls, leading to healthy relationships in later life.

After recent reporting of tragic events, all relating to the abuse of women and girls, it may well be that we in the UK feel these issues are unique to us. Of course they are not and, while we may only be tempted to look at solutions through a Western lens, it is important to take note of other programmes around the world to see where we might acknowledge and share best practice that works.

Bangladesh is a country where historic attitudes to women can appear medieval to the average Westerner. And yet, there is a growing recognition, even within some of the established institutions in the Bangladeshi government, that change is both necessary and inevitable in a country striving to become a modern-day democracy.

Change though is hard and, as in so many walks of life, it is the caring professions, the Church and para-Church that is taking the initiative.

Dinajpur region is home to two million residents in the north west of the country. It is located near to the long-established, Christian-run Lamb Hospital in Nawabganj. In early 2020, the hospital set up a comprehensive programme, managed by nine staff, offering young boys and girls a radical alternative to the status quo that has existed in Asia for decades.

The Adolescent & Community Transformation (ACT) programme lasts for three years and covers 21 related topics, from sexual propriety to healthy relationships, building self-esteem and countering fear in the lives of young people. Uniquely, it addresses adolescent mental and emotional health, which is something new to Bangladesh.

The programme’s project manager, Mr Utpal Minj, has been buoyed by the take up of the programme, which now has 540 individual groups signed on – 135 of them for boys – catering for 10,800 twelve to 17-year-olds. He is particularly thankful for the support of their parents to this initiative.

“The parents are allowing their children to attend our sessions,” he says, “and already we are seeing remarkable changes in the community. Parents are honouring their children’s opinions and are even going door to door to introduce their neighbours to the benefits of the programme.”

Further growth seems inevitable, and another team member, Golam Mostafa, is already looking for future funding. The stark case for its expansion is certainly there for all to see, and the government there is observing the rapid growth and considering supporting it.

According to damning research carried out by the project: “Adolescent girls in Bangladesh face gender-based discrimination, domestic violence, sexual abuse and higher drop-out rates from secondary education. Suicide is the leading cause of death among young females in recent years. Adolescent boys also face pressure to comply with prevailing norms of masculinity, which result in behaviours such as unsafe sex, violence and substance abuse.”

In another telling piece of research by UNICEF in 2016, “the child marriage rate in Bangladesh is among the highest in the world, at a staggering 52 per cent.”

Given those appalling statistics, it is refreshing to hear that the ACT initiative is starting to challenge some of the prevailing cultural norms.

And it’s working. According to Golam, four teenage girls under 16 have not married as a result of the programme. And its work with young men to develop a code of conduct honouring the value of girls demonstrates a hunger for a different attitudinal approach to women.

Bangladesh is pioneering its own ‘respect’ project. Let’s hope other nations take note.

For more details on the project, please visit lambhealth.org.uk/act-project