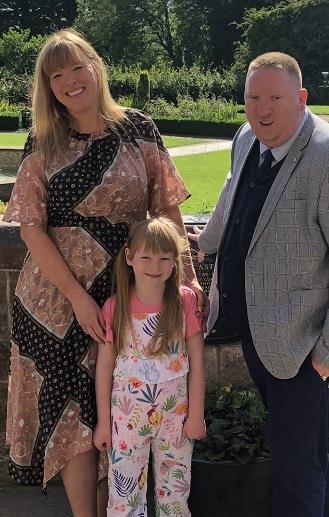 Every relationship has its ups and downs. But studies suggest that couples with a significant age difference have an added challenge. However, for soulmates Sam and Christine Bright, the number of candles on a birthday cake is irrelevant. As Christians, their love for God and each other conquers all problems, including an age disparity of 17 years. Married for nine years, the couple here look back on their journey.

“Just think, when Sam was born, I already had my provisional driving licence,” Christine chuckles, her accent revealing Scottish roots. “Some might consider 17 years a huge gap but, for me, being the older one in the relationship has never been an issue. Sam is what I’d describe as ‘an old soul’ and I think I’m quite young in my ways so it all balances out.”

How did Christine meet Sam and was it a case of love at first sight?

“We both belonged to the same church and had gone along to a special prayer meeting. After the service, Sam approached me and invited me to have coffee with him and some friends but, as it turned out, I had other plans that evening. At the time, Facebook was just taking off so when Sam sent me a friend request, I accepted. Before long he was pinging me all the time, inviting me to various events. As I got to know him, I began to appreciate what a lovely man he is; very thoughtful, kind and really quite funny. So, although it wasn’t a case of love at first sight, he definitely grew on me!”

What attracted Sam to Christine?

“I’d have to say, it was the way she prayed,” he says. “At the time, Christine’s stepdad was very ill and when she stood up to pray for him, there was something about the way she spoke that touched my heart. I wanted to get to know her although, when I invited her for coffee, there was nothing romantic involved; it was simply a friendly gesture. But of course, as time went on and we got to know each other, I knew she was the woman for me!”

Whatever interests the pair shared, it was their faith and passion for prayer that created a lasting bond. Christine explains how she came to know the Lord.

“As a wee girl, I saw the difference that salvation brought to my mum’s life and I wanted the same for myself. I was just eight years old when I quietly invited Jesus into my heart. There were no flashing lights or anything but I had this wonderful sense of peace.”

Born with facial issues, Sam had undergone many painful operations but, as he explains, some of the most tender scars were caused by bullying.

“When I was 16, I was in quite a dark place when a teacher suggested I come along to a church service. It was there I heard the gospel and, by the end of the service, I was desperate to experience God’s love for myself. At the end of the service, the pastor invited anyone who wanted God’s gift of salvation to raise their hand. I was so desperate, I stood up immediately! It’s the best decision I ever made.”

Did Christine have any serious relationships prior to meeting Sam?

“Yes, I did have a few boyfriends and at one point, I was actually engaged. But we weren’t of the same mind. God was central to my life and the young man wasn’t as committed. We just weren’t on the same spiritual journey and I knew that, as painful as it was, I had to end it. I’ll always remember the advice a pastor in Scotland gave me. He said not to settle for someone solely because we’re attracted to them. Better to wait for God to bring us a perfect soulmate. When I was 15, God gave me a promise, Isaiah 54:13: ‘All thy children shall be taught by the Lord and great will be the peace of thy children’ (KJV). So I trusted him to bring my true soulmate. I didn’t realise it would take another two decades or that he’d be 17 years younger than me!”

How did friends and family respond when 40-year-old Christine introduced her 23-year-old boyfriend?

“We didn’t encounter any negativity at all. Sam is so easy to like that my friends and family couldn’t help but love him. Now, it might sound odd that my mother-in-law is just nine years older than me, but we get on brilliantly!”

A year after they met Sam decided to ask Christine to marry him.

“We went to visit her family in Scotland first,” he tells me. “I bought the ring in Scotland before taking her to the famous golf resort, the Turnberry where, seated alone together on the steps, we prayed and then I gave her a T-shirt!”

“Yes!” Christine laughingly confirms. “It had the words ‘Changing my name to Bright’ printed on it so he must have been pretty sure I’d say yes.”

In the run-up to their wedding, the couple set about preparing invitations. Christine reveals the VIP that was at the top of their list.

“Our first invitation had Jesus’ name on it.” “Well, it was a symbol of our faith,” Sam explains. “It didn’t matter who else was invited; we wanted to show that Jesus was the most important guest.”

On 6 December 2011, the couple embarked on their journey as husband and wife. Since then God has fulfilled his promise to the 15-year-old Christine as, at age 42, she gave birth to their daughter Rebekah Rose.

“Rebekah Rose, is a wee miracle,” she says. “Doctors told me I couldn’t have children but nothing is impossible with God. Sam and I held on to our faith, believing God’s promise that we would become parents.”

Sam, who works in a care home, and Christine, a stay-at-home mum, love to witness for the Lord. But perhaps among their greatest testimonies was the birth of their daughter.

“The doctor who once told me I couldn’t have children was amazed to learn I was pregnant,” Christine reflects. “She asked if she could deliver the baby; it was such a blessed and joyous moment.”