Do we need a Black Santa? 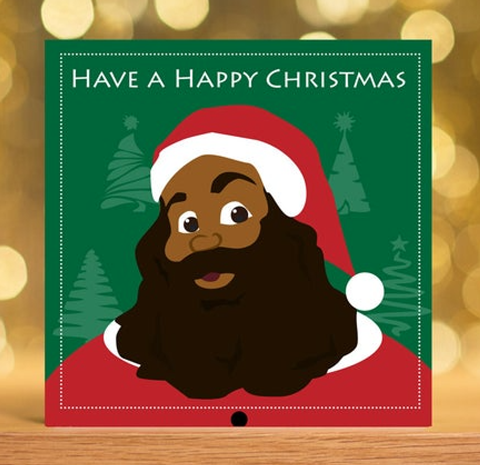 Where does the name come from?

Well, “Jambo” means greetings in Swahili. So it's the greeting card company which offers a diverse range of cards designed by UK-based Black artists and produced here in the UK.

What prompted you to start Jambo Cards?

I love cards, I love business, and I feel as though cards are like one of the last bastions of physicality. Gift giving is so important and keeps us together, especially in a time like this. It means a lot if you can give something personal. And I think it’s important that all children see themselves represented on the products around them.

What has the response been to your diverse card range?

It has been overwhelmingly positive and that’s encouraging. I think people really get the humour of the cards and humour can transcend the colour of your skin.

In your Christmas range, you have a card featuring a Black Santa Claus. Why do you think this is important?

Well I think representation is key. You need to have positive images of Black people because what you see on TV and in the media informs your memory and understanding of the world around you. So if you always see a group of people in a negative light, you tend to start believing that's all they are. We do need a Black Santa, or an Asian Santa. If it represents the culture we live in, it should exist. I definitely think it's about time we had a Black one.

The recently released Sainsbury's Christmas advert has prompted negative comments about the family being Black. What are your thoughts?

I thought it was a brilliant advert. I wasn’t even sure what it was at first as it looked just like a family video but it felt very authentic. I want to say I found the negative comments surprising but I know that there are many people with racist views in the world. It’s interesting though because this is only one of three Christmas adverts released by Sainsbury’s. One features a white family and the other has a family of animals. People aren’t arguing that the animals don’t represent them! This makes the comments definitely feel like racism.

I saw a Tweet which said, “If 95 percent of the UK is white, why do we need to have representation from minority communities?” What would your response be to that?

I've heard that before. Sainsbury’s is one of few major supermarkets stocking food of African and Caribbean origin so they are accurately representing their customers. Black people may be a minority but we are still part of society so why shouldn’t our representation be important?

We are all familiar with the sight of a White Jesus on Christmas cards. Why is it important for Christians to think about things like a Black Father Christmas on a card?

Representation in Christianity is very important. Biblical events took place in the Middle East and Africa, yet Christianity is often seen as a Euro-centric religion. Christianity has roots in a mix of cultures and Father Christmas has been adopted as a symbol of giving, so it's only right we see a figure that looks like our parents or grandparents.

Do you think that people of other ethnicities should be buying Jambo Cards?

Sarah Bishop is the founder of JamboCards.com