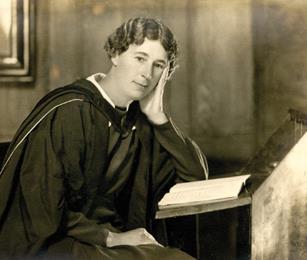 One hundred years ago, Constance Coltman blazed a trail as the first woman to be ordained into a British mainstream Christian denomination. The suffragist and pacifist was a Dissenter.

As Protestant Christians who separated from the Church of England because they could not “in good conscience” (conform to) the Articles of the CofE, the Nonconfomists faced many battles – the women even more so.

Constance, who had been brought up as a Presbyterian, had met resistance from the Presbyterian Church of England when exploring her vocation, so applied to the Congregational foundation of Mansfield College, Oxford. She was finally accepted because of her deep sense of God’s call, even though there was no certainty that she would be ordained after the three-year course because the denomination had no agreed policy on the question.

New Congregational ministers also needed a ‘call’ (invitation) from a local congregation before being ordained, a possibility which no woman had yet explored.

But Constance was persistent and, on 17 September 1917, she was ordained alongside her fiancé Claud into the ministry of the Congregational Union of England and Wales. They married the following day.

A century later, and the United Reformed Church and the Congregational Federation will mark the milestone – and their Dissenting heritage – with a Women of the Way Global Pioneers’ Gathering, public lecture and thanksgiving service in September.

+ Find out more about the work of the URC at www.urc.org.uk

Constance taught me to look at the bigger picture

Karen Campbell is a URC Church Related Community Worker at Grassroots, Luton. She works with the Bury Park Beech Hill Council of Churches and is the convenor of Cascades of Grace – the URC’s Black, Asian & Minority Ethnic (BAME) Women Network.

"It took me a while to become aware of Constance’s story, but now I do see the connection and importance of what Constance achieved, particularly from the vantage point of being a black woman minister.

"The temptation in the Church can be to simply accept things the way they are, go with the flow and assume that it’s ‘just the way it is’, but Constance did think about it and challenged the position because the way it is, is not necessarily the way it should be. The norm is not necessarily fair, just, or of God and we should question, engage with, and do something about it.

"When I candidated, I had no sense of how many black women ministers there were. I think I was very fortunate because, for me, the voices of those around me were supportive and keen to push me on. It didn’t occur to me to question the experience of other black women called to ministry. Then I was asked to go to a gathering exploring these issues and my eyes were opened to all sorts of experiences that were totally different from my own. I realised then that my story was not the story of others. I started trying to look beyond self.

"I grew up in a black Pentecostal church surrounded by black Christians, and when I came into the URC, I was in a predominantly black congregation so, in a sense, I was always in quite a protected environment. I was aware of issues ‘out there’, but they weren’t up close, they weren’t touching me.

"I became more conscious of the challenges facing a lot of black people in our churches. That’s when I started to develop a sense of responsibility towards the ‘bigger picture’. Just as it was important to Constance, so it was with me. She encouraged the hope that it’s possible to push through.

"I think for me, dissenting and being a Dissenter is part of my personality! The church I grew up in was one in which I felt you didn’t question, you just accepted things. By the time I got to my early 20s, I became aware of an increasing uncomfortableness about that, so I left that church and later joined the URC.

"I really felt this was my first experience of being in an environment which encouraged me to question and allowed me to do that as an individual. It was a liberation. What I valued about the local congregation was that they reflected all sorts of theological stances, but we could co-exist. We weren’t all the same, but we could still be one. It was like being set free.

"There’s no such thing as a typical week for me in Luton, but I lead worship on a regular basis and dream up and run different projects. We’re in a predominantly Asian/Muslim area and many of the churches here had lost touch with the community around them. Part of my role is to help people to consider how we ‘do’ church in this place; how to live our faith in this community.

"I love projects which help people to engage with each other and encounter each other. So often we share a space but live parallel lives. It’s wonderful to do something to bring people together; to say, 'This is a person with a name and family and concerns.'

"I sometimes say to myself that I’m a bit of a misfit, but I have learned to live with that and embrace that. I’m working with an ecumenical group of churches in a multi-faith type of context. I don’t find it uncomfortable, it doesn’t make me waiver. Instead it deepens my faith by making me question things about what I believe and why.

"I am comfortable with being uncomfortable. I think Constance would recognise that."

Constance was the first woman to train for ministry at Mansfield College, Oxford. Jenny Mills, for the URC, was the last.

Jenny says: “Constance was quite ground-breaking in that she was brave and counter-cultural. I’m taking inspiration from that because, for a long time, the Church has been full of people who say, ‘Come in and be with us and be like us’. Why don’t we go out and meet them, let people be who they are and let us risk being continually changed by the encounter? I think Constance’s heritage lies in pushing the established order and taking people to a new place through God, as revealed in Jesus Christ.

“When I was at Mansfield College, Constance’s story was shared and there was a real sense that we continued to be part of that. As a working mum, the college authorities came up with a solution so that I could do the course. I’d be in the quad at Oxford on Mondays and Tuesdays and then, for the rest of the week, I’d teach in a difficult and disadvantaged area of Northamptonshire. As a result of that, I’d be constantly thinking, ‘How can I make sense of these studies in the world? How can I share the love of God in this place? Where is God in this?’

“Constance went through such a lot, but there is still a long way to go. The fact that she was brave enough to be so determined, so sure, and to take the knockbacks says a lot to me. She was tenacious and capable of absorbing the culture without judgement. That is what I should be doing too.”