'Courage is a muscle – I am much more confident now' 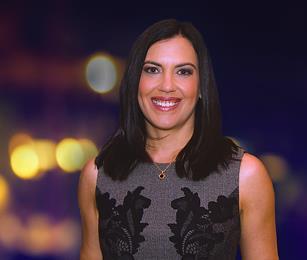 Sirens are wailing and rockets are falling as she dashes for cover in the bunker. She’s thousands of miles from home and living in one of the most treacherous regions of the world. Family and friends are unaware of what she does or where she is, and she’s immersed in a culture alien to her beliefs and to her status as an independent woman. And there’s no time off – no weekends, no holidays.

For 10 years this was how Michele Rigby Assad lived in her role, undercover as a counterterrorism specialist for the CIA in the Middle East. She was tasked with establishing who could and could not be trusted, gathering intelligence to prevent atrocities, and the decisions she made every day were a matter of life and death.

Now retired from the CIA, Michele has written of her experiences in a recently published memoir Breaking Cover. Through this book, the media attention it has generated, and the speaking engagements she has subsequently been invited to give, she wants to demonstrate that ordinary people can do extraordinary things, when their faith is greater than their fear.

“People often say that I am this incredibly courageous person, but that’s wrong. There is no door that God opened for me that I didn’t walk through with a great deal of trepidation, but I did it anyhow. You can’t wait until the fear subsides, you have to move forward in spite of it. You have to do the things that scare you.

“Thankfully most people don’t have to walk into a war zone, but I think there are so many things in our life that God is pushing us towards. And we feel scared. We may be uncertain, or confused, or not feel capable, but we have to do it anyhow.”

If you have a notion of what a CIA officer should look and sound like, Michele is unlikely to be it. Warm, attractive, charming and generous, she has a ready smile and seems gentle and kind. And she is a committed Christian.

“I think most people understand the idea of wanting to support your country and wanting to be part of the fight, the war on terrorism,” she says. “My job was to collect intelligence, and select the unvarnished truth of a situation. Who better to do that than someone who understands how important the truth is.

“It’s just like being a missionary. There are so many parts of the world where you have to conceal the fact that you are a missionary. So it’s essentially the same thing – you are concealing what you are doing in order to achieve a mission which is in everyone’s best interest.”

Michele has persisted in her faith since becoming a Christian as a small child, and the promise she made then has continued to be the foundation for her life. “I was four or five years old and my commitment was ‘I love God, I want him to be the centre of my life’ and that has been it ever since.”

She began to recognise that God was calling her for a very special role when she graduated from high school in Florida and worked in an orphanage in Egypt for a month.

“That was a turning point in my life because I was exposed to this extremely foreign culture. I was so fascinated by how different it was. I had this passion to make sense of that chaos, to try to understand this part of the world.

“God had put this passion deep within me and that just grew and grew. So I fed it.”

She returned home and pursued Middle Eastern studies in her education. She travelled widely, experiencing more of this new culture, and she learned a new language. She also met her husband, originally from the Middle East and a native Arabic speaker.

“I realised the Holy Spirit was nudging me in a particular direction, but I didn’t understand the purpose for it.”

Then she and her husband were invited to apply for the CIA as counterterrorism officers. She knew nothing about the work, and had no background in intelligence. Her initial application was just one of the 50,000 received each month, but both Michele and her husband, Joseph, were accepted for training. When the planes hit the World Trade Centre on 9/11, Michele felt everything came together. “It hit me in that moment that God had prepared us for this unique point of time which none of us knew was coming.

“To have this huge expertise in Arab culture meant that it was such a perfect fit. It was easy to see why we had been brought to that moment in time. To serve your country, to serve the world community in a role like that is a huge privilege.

“Every life decision for me is ‘where does God want me in this moment? which is the door he’s opened?’ I think it’s important to recognise the opportunity is given to you by God because even if you don’t think you’re capable, you’ve got to understand that he thinks you’re capable. He’s put you there. He knows better than you do, so you have to rely on that.”

Yet women in the CIA are not commonplace and in the region in which Michele was working, women are not respected, nor are they invited into the workplace. So in addition to all the training for the intelligence role, she also had to overcome prejudice and, on occasions, abuse and aggression both professionally and in her personal daily life.

“I wasn’t sure I had what it took, but I found I had a real facility for combing through mountains of information and finding what’s important.

“Most of the time it’s not hard to collect intelligence, but it’s really hard to make sense of it or to know what’s good, or not. So, being able to process such large amounts of information quickly and then to be able to deal with people who are so different from you – the fact that I’m sitting across the table from a guy who thinks that women should never leave the home uncovered and without a male escort. It was a huge challenge, but once I figured how to do it, my confidence soared.”

Michele is eager to encourage others, and particularly women, to live to their full potential.

“There are so many women in the world who have such strong intuition about other human beings. They can read non-verbals and are really switched on. That’s what makes a really good intelligence officer.

“I love explaining to women how they already have these crazy superpowers but don’t realise it. You know how you get this sense that your kid’s telling you the truth, just by looking at their body language. Or you have a situation where your kids want to sleep over at someone’s house but you don’t know the parents and something about them makes you feel uncomfortable. That’s exactly what makes a good intelligence officer. It’s being able to recognise those hunches and act on them.”

After all that Michele has experienced, how does she feel equipped for life today?

“It was hard at first because even though we were exhausted and needed a break, we didn’t know what normal life was like. We were adrenalin junkies and we were used to doing things that mattered every day. You go from bombings to deciding which one of the 100 salad dressings you choose from the grocery store – that’s my biggest decision of the day!”

Of course, Michele is being disingenuous as, since leaving the CIA, she has continued to take demanding roles. First she worked as a security expert, again seeing God’s hand miraculously making job opportunities arise – a CIA officer has no CV and no way of telling prospective employers about the previous 10 years of their life. And with her husband, Joseph, she joined a group of Americans who assisted the evacuation of a group of persecuted Christians from northern Iraq, a journey that was televised in an ABC documentary.

At the moment, though, Michele believes that she is able to reach many people through her speaking engagements and her book, and can encourage others through her life experience.

“When you are marketing a book it’s all about me, me, me, and talking about myself can become exhausting. And it’s not about me, it’s about what God has done through me and the doors he’s opening for me.” So she starts each day with a Bible reading, prayer and praise music. “That gets my mind focused on God.”

In taking on such a demanding career, did she never doubt her calling?

“There were so many moments. I would pray and not hear anything so I was very expressive with God. Almost like a broken record, I’d say I don’t understand, I am confused – please help me. But I never got angry and I never blamed him. I’d say ‘I’m human Lord – this hurts, I don’t understand and I don’t like it, please help me get out of it’. But I never second-guessed him or his providence. I guess, deep down, as much as it hurt, I knew eventually it would work out.

“As human beings we are so anxious because we’ve got to put food on the table and we want to be doing something that matters, but what we can’t see is that God is in the middle of lining up the chess pieces for this incredible play that is going to happen; you just can’t see it in that moment.

“I am much more confident than when I was younger and I am a much more courageous person,” she says.

“I tell people that courage is a muscle and the more you exercise it, the easier it is to do things that scare you,” she says. “So I am very well exercised in this area. I have been in so many crazy situations, but you know God is in control, so it’s OK.”

+ Catherine Larner is a freelance journalist based in Suffolk
+ Breaking Cover is published by Tyndale, priced £18.99